Rooks hit five- and the summit 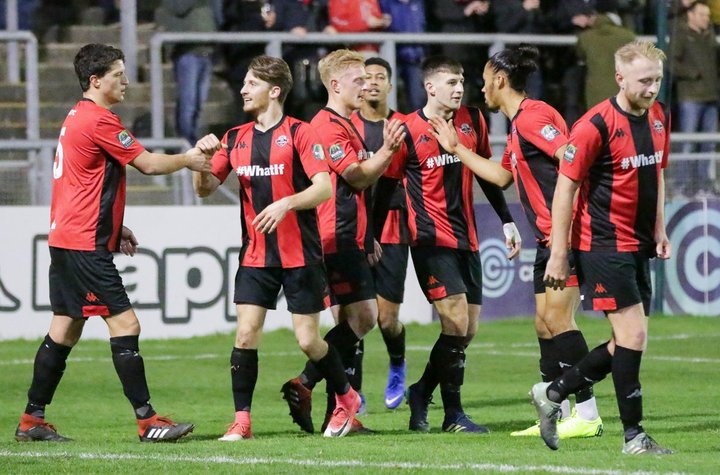 We had one game last night. And what a game it was for the hosts.

The last time Lewes were top of the Bostik League was more a decade ago- and this time the sustainably run, community owned club have made it there without needing to look over their shoulders at the taxman, to the delight of their owners all around the world! They needed a two goal victory over Brightlingsea Regent last night to hit the heights, and they did that and much more, finding the back of the Regent net five times in the first half.

You can see all of James Boyes marvellous images from the evening here, and one at the top of this article- but Regent fans might want to look away now, as there are many, many celebration photographs. The celebrations started as early as the fourteenth minute, when Luke Blewden headed home from four yards, and a minute later it was 2-0, Dayshonne Golding slotting the ball under James Bradbrook after a pass from Jonte Smith.

Blewden had his second- and the Rooks third- in the 23rd minute, finding the net with another header, and then the home side took a bit of a break for twenty minutes, when Stacey Freeman delivered a thing of beauty, side-footing a layoff from Frankie Chappell into the top corner from the edge of the box. When Jonte Smith headed home the fifth just before the break the crowd at the Dripping Pan knew that, barring a miracle, they'd be celebrating being top of the league by ten o'clock.

A much improved Regent made a match of it in the second half, but couldn't find the net. So the visitors end the night in 19th place, whilst the Rooks look down on the rest after recording their fourth consecutive victory.

You can read- and listen to- the programme from the match here.

Woods appoint new manager...  ...and he may be called Dash, but they weren't in a hurry!