Spotlight on league legend on night of celebrations 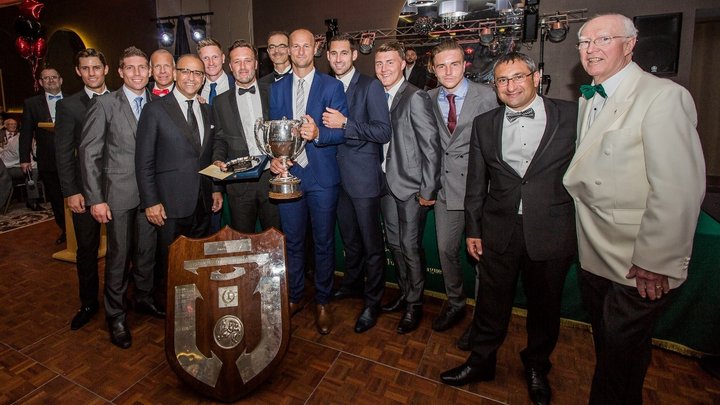 They might been gathering to honour their stars of the season, but guests at the Ryman League’s glittering annual banquet and ball saved their loudest cheers and more than one standing ovation for retiring chairman Alan Turvey.

On an emotional Saturday night at the plush London Wembley Hilton Hotel, the longest serving chairman in the league’s history after nearly 33 years at the helm was feted by more than 500 guests including retiring Football Conference chairman Brian Lee, Southern League chairman Ken Turner and Non-League Paper editor Stuart Hammonds.

Ahead of his election as their new chairman the following morning at the Ryman League’s AGM, former vice-chairman and company secretary Nick Robinson set the tone, hailing his predecessor as a Non-League “legend” to loud applause before presenting him with a special plaque inscribed with the names of every member club since his appointment back in 1982.

Fittingly, in his speech to diners before helping to hand out the night’s accolades alongside Turvey and Theo Paphitis, chairman of the title sponsors The Ryman Group, Robinson also announced that the Ryman League’s cup competition was also being renamed for future seasons as The Alan Turvey Trophy.

Robinson said: “In the future the league cup will bear his name as The Alan Turvey Trophy. I have always wanted to make sure we honour people while they are still with us and not as a memorial and this is a fitting tribute to Alan Turvey, a true Isthmian. ”

The outgoing chairman is continuing as the Ryman’s president and also as a director and Robinson added: “We have 72 clubs, a very fine competition and that is his legacy so I want to pay tribute to the tremendous work Alan has put in in behalf of everyone over many years. Alan has left the league in very fine form and we will continue to rely very much on his experience and his help.”

Before being entertained by comic Bobby Davro and dancing late into the night at the plush venue in the shadow the national stadium and its famous arch, the Ryman League’s clubs went on to celebrate another season of success with Maidstone United’s Ryman Premier champions leading the way as the accolades were handed out to nearly 40 clubs and their star players.

The Stones and their manager Jay Saunders don’t do things by half. Excluding those who’d already jetted off on holiday, the Kentish club’s boss brought along almost their promotion winning squad to parade on stage before collecting their trophy and after Turvey, receive the loudest cheers of night.

After winning promotion as Ryman South champions and their runs in both the FA Cup and FA Trophy, Burgess Hill Town were the undoubted stars of the division and were followed onto the stage by runners-up Folkestone Invicta and play-off winners Merstham.

Like his championship winning counterparts, Saunders at Maidstone and Mark Morsley at the Marketmen, Hillians boss Ian Chapman also returned to the stage to collect one of the Ryman’s three divisional Macronutrient manager of the year trophies.

Other individuals who also left with their own personal awards included the Ryman’s golden boots, East Thurrock United’s Sam Higgins in the top flight, Harlow Town’s Alexander Read in Ryman North and in Ryman South, South Park’s Chris Smith and Folkestone Invicta’s Ian Draycott who shared the accolade after finishing the campaign with exact records.