Turning down the BBC- and heading for the FA Cup First Round!

We catch up with Haringey Borough manager Tom Loizou to preview Saturday's big FA Cup tie against Heybridge Swifts- and to find out why Borough sent the national broadcaster packing.

On Saturday two of our Bostik North sides- Haringey Borough and Heybridge Swifts- face each other in the Fourth Qualifying Round of the FA Cup- meaning that one of them will definitely get to be in the First Round draw alongside the likes of recent winners Wigan Athletic and Portsmouth, Charlton Athletic, Blackburn Rovers, and Coventry City.

Both sides have been in magnificent form this season. Borough remain unbeaten in league and (obviously) FA Cup, and earlier this week were announced as winners of the Mitre Manager of the Month, the Sells Goalkeeping 'Safe Hands' Awards and the betting.net Performance of the Month Award. Who says that good things come in threes? Swifts- whose manager Jody Brown won the Manager of the Month award for August after ending the period with a one hundred per cent record (in September they slipped up and lost an entire match, although won all of the others!) will prove tough opponents, and will enter this match on a run of four straight victories. Mind you, Borough can better that, having won their last seven!

We caught up with Borough manager Tom Loizou to ask about his hopes for the season, and look forward to what could prove to be a classic cup tie this weekend. We started by pointing out that he was currently the manager of the most successful club on White Hart Lane.

"Actually, I'm always the manager of the most successful club on White Hart Lane. That other lot down the road might call their ground White Hart Lane, but they are actually on the High Road. I have a sign above the bar that says 'White Hart Lane,' and everyone who comes in comments on it and asks whether I'm a Tottenham supporter. They couldn't be more wrong, I support Arsenal, and it's important that those imposters realise that Haringey Borough is the only team to really play at White Hart Lane!"

Tom is currently presiding over the third of what have so far been the three most successful seasons in the club's history. Champions of the Essex Senior League, followed by a play-off place in Isthmian North last season, and this season both unbeaten in the League and in the Fourth Qualifying Round of the cup for the very first time. But when you ask him if he is content with this, the answer is an unequivocal no. 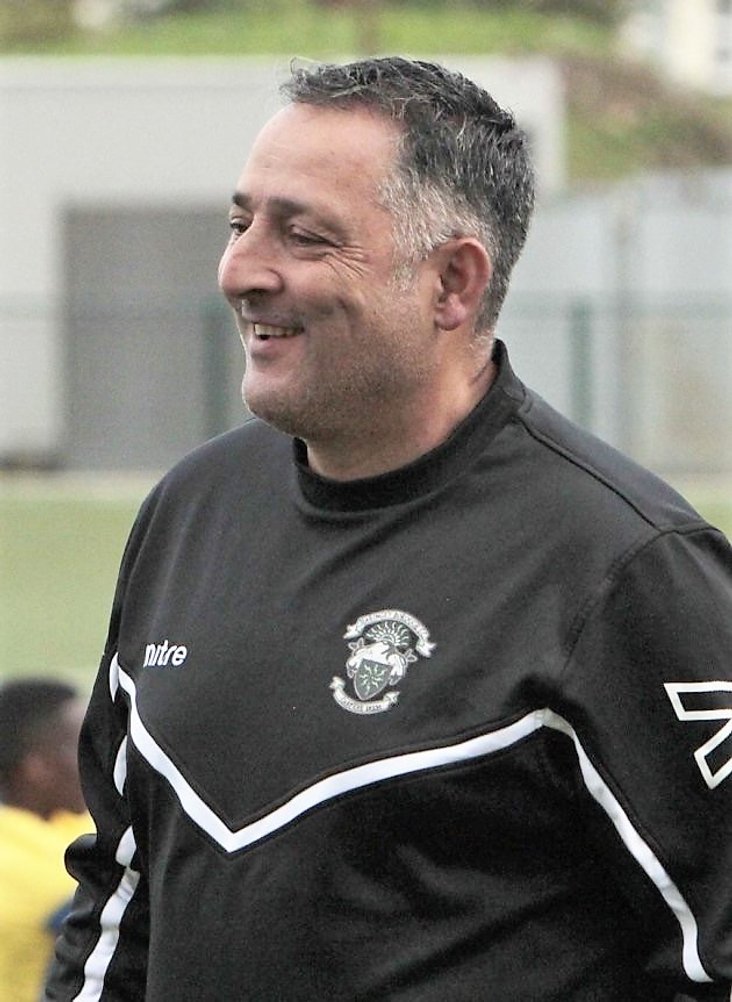 "We've got a really good squad, and it can get better. Some of the lads here are getting interest from Football League clubs, and our biggest challenge might be to keep hold of them all. They are still getting used to the league, and still learning just how good they are, but we haven't finished yet. I expect us to be at the right end of the division when the season ends."

But it is the cup that everyone is interested in at the moment.
What are his expectations for Saturday?

"Obviously we want to win, but there are no guarantees. Heybridge are a tough side to beat- we might have managed it twice last season but they were both difficult games, and they've come a long way since then. That said, we should play with confidence, and if we do that there are very few teams who can stop us. We showed that against Welling United a couple of weeks ago (a performance which won the club the betting.net Performance of the Month Award for September). Jody is a good manager with good players, and now he has that Spanish connection- it could go either way. But I think we're good enough, and I'd like a big away game in the First Round if we can get to it. It would be good for our players to play in front of a big crowd, and the money would be very important as we look to continue to regenerate this football club for the good of the community.

We're in the process of putting up extra changing rooms, because we've also got an Under 18's side, Under 23's, a Ladies side, and we'd like a Ladies Under 18's side too. That's just the start, but everything costs money. We're trying to build the youth side of the club- we've given free season tickets to the kids in the local area and our average crowd has grown dramatically as a result."

Money is obviously important at our level, but although it's important for Borough it certainly isn't the be-all and end-all. That might explain why they dampened our excitement in Bostik Towers earlier this week.

The BBC, in their wisdom, decided that they would like to make Borough versus Swifts their featured match, showing it live on the iPlayer and via the red button. Tom and the Borough board discussed it, and then said no. Why did they make that decision?

"Two reasons, really. Yes, the extra money would have been nice, but they gave us only a few days notice and wanted the match to kick off at 1230. Our players work, and lots of them work on Saturday mornings. Had we had more notice they could probably have managed to re-arrange their lives but with only a few days to plan that can't be done, and we're not going to go into the match fielding a weakened side and have players missing one of the biggest days in their career.

The other issue was that we have a car boot sale at the club every Saturday morning. This is important to the local community- this isn't a wealthy area and many people rely on this to buy clothes and even food. Again, had we had time, we could perhaps have moved the boot sale around to accommodate the football, but you can't simply cancel an event that's important to the community to suit the TV people. If anyone who can't get to the game would like to listen in, the Back of the Net people will be covering it (and there will be video highlights on the Bostik League show here on Sunday)."

There can't be many clubs who would say no to television exposure-Leeds United tried it last year but that didn't end well- but Haringey Borough aren't like many football clubs. Tom is effectively Mr Borough, the one and only full time employee at the club, and he is responsible for the hire of the facilities, managing the car parking, and organising the community events that the club host. If Borough do make it to the First Round and they end up playing Wigan Athletic at 3PM on a Saturday afternoon, he'll probably make more history as the only manager in the competition to spend the morning before a big cup tie managing a car boot sale!

We'd like to wish both Haringey Borough and Heybridge Swifts the best of luck for tomorrows match. Whichever side triumphs, both have been a credit to the League- and we're sure they'll continue to do us- and their supporters- credit against the big boys!

The Prince of Regent becomes the Premier of Parkside  We caught up with James Webster, new manager of Aveley, to find out what prompted his decision to leave Brightlingsea Regent after more than seven years in charge. It was rather emotional.