Ashford United have taken over at the top-but only just. Could this be the most keenly fought title race in years? 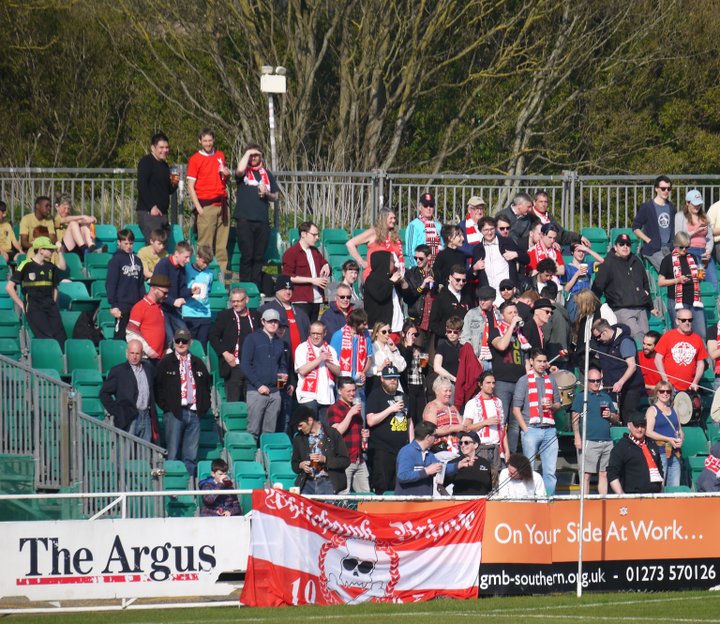 A few weeks ago it looked as if Hastings were home and dry. Now they’ve been overtaken- but there are only eleven points between first and sixth. Who will come out on top?

Only a few weeks ago Hastings United looked home and dry at the top of the South East Division, but a run of only one win in five matches has seen Ashford United take over at the summit, if only on goal difference. Can Hastings get back to winning ways this weekend? They host Sittingbourne at Pilot Field, the Brickies on a poor run of their own, with four consecutive defeats and no wins from their last six. It isn’t as if Hastings have suddenly disintegrated- they had an eight match unbeaten run in between two defeats to the Nuts and Bolts- but three draws and a defeat have made them look vulnerable where they had previously looked invincible. The Brickies will also feel that the form table doesn’t tell the whole story of their recent matches, as three of those defeats were by a single goal- just like the result the last time they played Chris Agutter’s side.

The Nuts and Bolts also look as if they have a tricky afternoon in prospect, as they will be leaving on a jet plane and arriving in Guernsey. Ashford have lost only one of their last ten but were held to a draw at home to Haywards Heath Town last Saturday and were defeated by fourth place Cray Valley PM a few weeks ago, so certainly aren’t infallible. The Green Lions have seen their good form escape them recently with only one point from their last nine, which has seen them drop to ninth place, so will be desperate to get back to winning ways. The match kicks off at 2PM.

Third place Whitehawk host bottom side East Grinstead Town. The Hawks have closed to within three points of top spot with a run that has seen them unbeaten during their last seven matches, but they have drawn four of those- three times giving up winning positions to end with only a point. They played the Wasps last month and left with only a point, and whilst the visitors are still marooned at the bottom, six points behind Ramsgate, they have shown improved form of late and do have two matches in hand over the side above them. East Grinstead have taken four points from their last six- all courtesy of Three Bridges- their best run of the season so far. Our image is of that seldom-seen sight recently- a sunny Whitehawk.

Cray Valley PM have swept back to their earlier form, winning five matches in a row and scoring eighteen goals in the process. The Millers are at home to Burgess Hill Town, who have won their last two matches- but the last time they did that they then went and lost the following two, so they’ll want to guard against that happening again.

Herne Bay, who start the day in fifth, have seen their impressive run halted by a draw and a defeat in their last two matches. They host Three Bridges, who have taken only one point from their last four matches- and only seven points out of the last thirty on offer- and who will be looking nervously over their shoulders as East Grinstead may have eight points fewer but they’ve played three games less.

Eighth hosts seventh as Chichester City welcome Hythe Town. City have won four of their last five and although they are nine points off the playoff places have five matches in hand over most of the sides occupying them; whilst Hythe have a point more but have played six additional games to get it. With only one defeat in ten the Cannons are one of our form sides- can they keep their run going?

VCD Athletic play host to Whitstable Town. After four consecutive defeats Vickers have turned around their form and are unbeaten in three, with two victories, whilst the Oysterboys have gone off the boil a little with only one point from their last two matches but were five unbeaten prior to that.

Haywards Heath Town travelled to Sevenoaks Town last week and picked up three points, but Oaks have a quick opportunity to get their revenge as they head to Hanbury Park this weekend. That victory was Heath’s first in seven matches, whilst the visitors have taken only five points from their last eighteen and have slipped down the table as a consequence.

Faversham Town host Phoenix Sports. Sports have slipped down the table after losing four of their last six, although their last two defeats came against sides in the top four. The Lilywhites have been in much worse form, however, and have gone eight matches without a victory.

 Olutade returns again to Fetcham Grove Striker left Leatherhead in the summer, but has since returned twice!