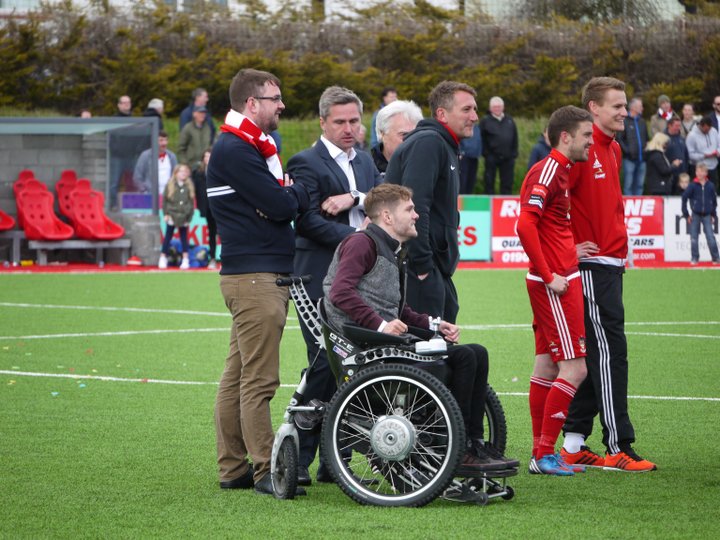 It's been a mixed decade for The Rebels, from nearly going out of existence, surviving week to week as attendances dwindled, then being saved by a majestic takeover from George Dowell, who prevented our extinction. On that basis the highlight of our past decade is, of course, George's takeover- but of course it's a match that the Bet Victor Isthmian boys are looking to hear about, and whilst there are many notable games, such as beating Whyteleafe with ten men- scoring twice in the last minute; beating Whitehawk on penalties in the Sussex Senior Cup semi-final, beating Croydon Athletic at home to put us firmly in the 09/10 title race, and many more, it has to be the play offs in 15/16 that are the high point of the decade. Ok, I'm cheating. I'm picking two games.

Play off phobia was a very real phenomenon with us Rebels, having had three previous semi- finals we massively under performed in. The 15/16 season was also my first living overseas, having moved to Hamburg. Trust my luck to improve when I've moved away! (Spoiler alert!)

The nerves for the Hythe match in the semi final were rife in the old Rebels haunt, The Downview Pub, before the match. Nerves were soon settled as we raced into a two goal lead in mere minutes, including a world class effort from current Leyton Orient star, Jordan Maguire-Drew. We couldn’t quite believe what was happening as we found ourselves two up and in full control at half time. Things went from good to great minutes after the break as it became three, four, five, six, seven. These things don’t happen to the Worthing of old. The terraces were bouncing, the East Stand roof was nearly blown off, but that was just a taste of things to come.

Then Saturday came around. If we were nervous before the Hythe game, Faversham in the final was a million times more nerve jangling. Another early Downview meet, accompanied by a group of ground hopping Norwegians who adopted us for the day. A huge crowd, the biggest in years had crammed into Woodside Road and nerves were through the roof. The boys in red had no such nerves though as an early Brannon O'Neill corner swung in, just inside the post and the linesman flagged- goal, pandemonium on the terraces, the perfect start for the Rebels! It got better as Faversham were reduced to 10 men on 20 minutes, and minutes later we had one foot in the Premier Division as Gary Elphick grabbed a second. A third was added in the second half- and Rikki Banks got in on the act, saving a late penalty to make our two play-off games a record of ten goals with none against. The George Dowell reign had truly begun and this was just the start of this glorious journey we are on.

The decade started with us losing all our players at the end of 09/10, with no money, about 200 fans and not knowing if we would have a club or not. It ends with us joint top in the Premier, attendances exploding and only getting higher- and without George Dowell none of this would have been possible.

So onto the next decade- and up the Rebels!

 Who will have a Happy New Year? We’ve a large number of New Year’s Day fixtures. Who will kick off 2020 with a win? Here’s our preview.