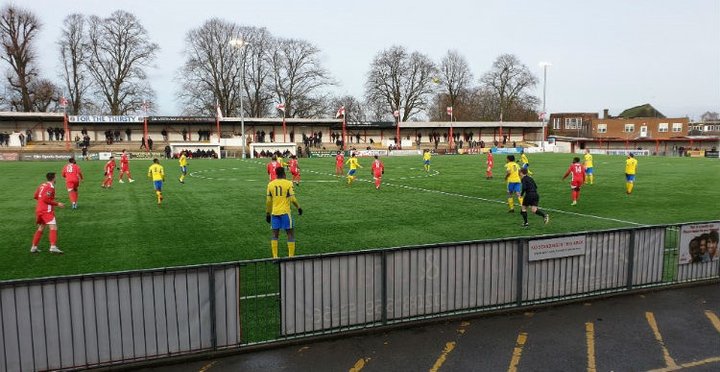 Blogger Louis Maughan headed to Colston Avenue to watch Haringey Borough try to return to the Bostik Premier summit. It didn't quite work out that way.

In late summer I made the trip into Essex to watch Haringey Borough play one of their first away games in the Bostik Premier Division against Brightlingsea Regent. This was in the days before their famous FA Cup run, before several appearances on BBC television, and before YouTube videos about the club went viral. A sprinkling of visiting fans arrived in Brightlingsea that day to see Boro win 2-0, proving they would be competitive in their new division.

Half a season later I’m travelling away with Haringey once more, but not quite so far this time. The difference is marked. A large band of supporters in yellow and blue scarves congregate in the large open terraces of Surrey to watch as their club, swelling with positivity, takes on Carshalton Athletic.

Haringey Borough might rapidly get a bit sick of teams from Surrey.

AFC Wimbledon ended their memorable FA Cup run in November. Boro then embarked on a nine-match league winning streak that was eventually ended by Merstham. They were sitting pretty at the top of the table at Christmas when their closest challengers would emerge, Dorking Wanderers. Dorking have since taken over at the top and Haringey’s latest attempt to return to the summit of the Bostik Premier Division came at Carshalton Athletic.
Carshalton, like Haringey, were also promoted to the Premier Division last season, but unlike Boro, they were promoted via the South East Division. Athletic’s season had not, so far, been as successful as Haringey’s. They’ve more than held their own, however, while embarking on an impressive FA Trophy run which included a 3-3 draw with Barnet five days after the Bees had drawn 3-3 with Championship side Brentford in the FA Cup.
Carshalton are no strangers to the Premier Division. The Robins spent the whole of the 1980s and 1990s there, only managing a couple of fourth place finishes before being one of the sides that went on to be founding members of the new Conference South in 2004. Their conference adventure lasted just two seasons before they returned to the Isthmian League.

Athletic’s league campaign had been mixed so far with 10 wins, 11 defeats and a zero goal difference to show from their 28 games. Their run in the FA Trophy had provided them with a couple of games in hand which, if won, would see them just three points off the playoff places. There was still very much still plenty to play for in the division.

The Robins previous two games were 3-3 draws against Barnet, in the FA Trophy, and Worthing in the League. Prior to that they’d also drawn with Whitehawk and lost to Merstham either side of a home win against AFC Hornchurch. Haringey had come back from being 1-0 down to win 2-1 in their last match against Brightlingsea. Prior to that, they’d also pulled back a 4-2 deficit to draw 4-4 against Burgess Hill following defeats against Harlow Town, and Tonbridge Angels, and a 1-0 victory over Margate.

Carshalton’s War Memorial Sports ground, a few minutes walk away from Carshalton Station, feels palatial as you enter. There are stands all the way around that include a large terraced section all the way down one side. The magnificence of the ground was more than matched by the home side’s performance. They started brightly and nearly caught the visitors off guard in the opening minutes. Valery Pajetat was called into action to save, at full stretch, to save from Harry Ottaway.

Man of the match Ottaway was a thorn in the side of the North Londoners for the whole game. He soon laid on the first goal, finding Korboa whose deflected shot looped around Pajetat into the far corner. The travelling Haringey fans weren’t too perturbed seeing as they’d been behind in their last two games, but the home fans were jubilant at the way their side had started the game. So much so that there was a brief lull in traffic to and from the bar, which seemed to do great trade throughout the game.

Haringey soon began to ease their way into the game. The best chances they could muster, however, were from set pieces as Carshalton continued to look solid in defence as well as lively up front. Just as it seemed that Haringey might equalise the Robins struck again. It was Ottaway once more that unlocked the Boro defence. He got on the end of a through ball and chipped a cross towards the far post. Korboa was again on hand to slide the ball home.

The visiting fans, many now on their way towards the bar, now looked a little more concerned. They were about, however, about to get a lifeline. A set-piece just before the break was headed down by Kirby. Carshalton tried to scramble it away but Coby Rowe reacted fastest to force the ball home. It was game on for the second half.

Or so it seemed. Carshalton appeared to up their level even further after the break. The Robins were on top for large parts of the opening exchanges of the second period. They soon restored their two-goal cushion with the best goal of the game. Ottaway picked up the ball in space outside the box, turned and fired home a fierce drive towards the top corner. Pajetat got a fingertip to it but there was too much power. It exploded into the back of the net and all but extinguished Haringey’s hopes of a comeback.

Boro rung the changes, but in truth, Carshalton were fairly comfortable for the majority of the second half. Ralston Gabriel, soon to return to the National League with Boreham Wood had a couple of opening but Carshalton defenders managed to shut down any hope of a second goal for the visitors. The final nail in the Surrey coffin for Haringey came in the shape of news that Dorking Wanderers had won 6-1, meaning they were now six points behind the leaders of the Bostik Premier.

For more from Louis, visit his blog, here.

 Get with the e-programme: 16 February 2019 Our electronic programmes from the weekend