Drama in the FA Trophy... 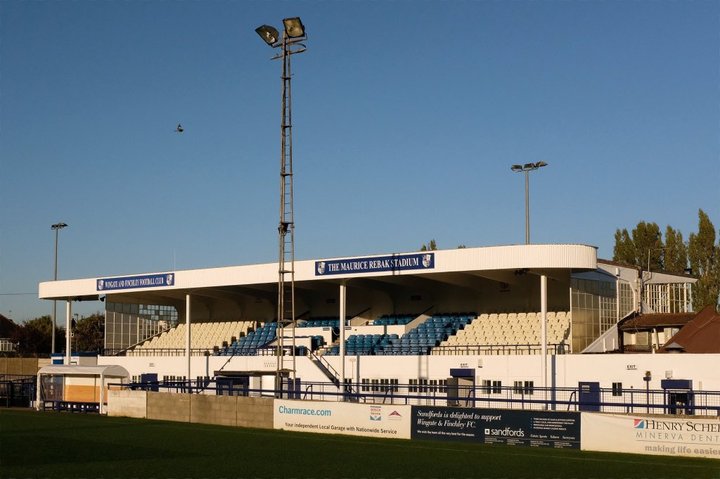 ...and in the league, more wins for Sports and Hornets. It's our round up of last night's action.

We had two Bostik giantkillers in the FA Trophy last night- a statement which is only marred by the fact that one of the giants slain was one of our own.

We'll start at the Maurice Rebak Stadium, and hail the efforts of Wingate & Finhley. On Saturday they came from behind to earn a draw at National League South Chippenham Town, and last night they had to come from behind once more- but went one better, dumping their higher placed apponents out of the competition to earn a home tie with either Dulwich Hamlet or Welling United.

The Blues started the match by turning orange, having to don their away shirts to avoid a clash with Chippenham, and they went behind in the twelfth minute as a deflected shot found its way into the net. They weren't downhearted, however, and Rob Laney headed home to level twelve minutes later, and soon it was 2-1 as Reece Beckles-Richards ghosted past two defenders to fire home. Thirteen minutes after the break Luke Ifil made it 3-1 with a beauty, and although the away side were able to narrow the gap with eleven minutes to go the home side held on to record a famous victory. You can see the goals by visiting their Twitter feed here- and you should, as they are all excellent.

On the Essex coast Hayes & Yeading United, going so well in the South Central Division, were visiting Brightlingsea Regent following a goalless draw in the original tie. The Premier Division side took the lead five minutes before half time, Jake Clowsley finding the net, but United weren't downhearted, and Hassan Jalloh got the equaliser from outside the area seven minutes after the break.

Eleven minutes from time the underdogs got the winner, Toby Little following an assist for the first goal by scoring the second himself, as he whipped a free kick into the Regent net. United's reward is a trip to face the holders, National League North side Brackley Town, who you might recall defeated Bromley at Wembley Stadium in May.

Lewes, like Wingate & Finchley, had to face National League South opposition in Hemel Hempstead Town. Unlike their rivals, however, the Rooks were unable to find a victory- although they weren't far away. Jack Snelus and Tom Knowls gave the Tudors a two goal cushion, only for Sam Karl to pull a goal back for the away side just before half time. Steve Cawley made it 3-1 with twenty five minutes to go, only for Harry Reed to almost immediately reduce the arrears once more, but although Lewes applied lots of pressure in an attempt to secure an equaliser they fell just short.

Into the League now, and in the Premier Division Whitehawk and Folkestone Invicta played out a 0-0 draw which leaves the home side bottom of the table, and the stripes in fifteenth. On to the South Central Division, and Bedfont Sports won their fourth game in a row, delivering a comprehensive victory over Northwood. Charlie Postance got a double, and David Pitt grabbed a late penalty to lift Sports to twelfth- and for those who like things in order, they have a record of 6 wins, 2 draws, 6 losses, twenty nine goals scored and twenty nine conceded.

In the South East Division, Hastings United were hoping to cut Cray Wanderers lead to seven points, but it remains at ten as Whyteleafe instead underlined their own promotion credentials by winning 2-0. A goal in both halves, Bradley Wilson and Bryan Akongo finding the net, earned Leafe the win which propelled them into fifth place. Horsham are sixth, second half goals from Lee Harding and Tyrell Richardson-Brown giving them victory over Greenwich Borough. The Hornets have now won six of their last eight league matches, with only one defeat.

In the Velocity Trophy, goals from George Purcell (2) and Leon McKenzie gave AFC Hornchurch, minus Jim McFarlane for the first time in more than a decade, a comfortable win over Chipstead, whilst the Urchins Premier Division rivals Burgess Hill Town also overcame a tough test, winning 2-0 away to Hythe Town with goals from Ben Pope and Brian Galach. Taofiq Olomowewe and Liam Hope gave Enfield Town an early lead at Maldon & Tiptree, and they held on to it despite De-Carrey Sheriff's late consolation for the Jammers.

The Quarter Final line up now looks like this:

Matches to be played by 18th January.