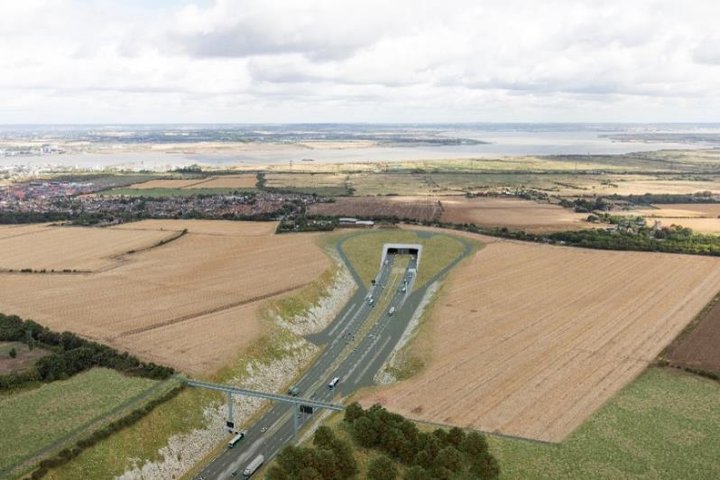 The Bostik League has been contacted by Highways England in relation to their proposed new Lower Thames Road Crossing. They’ve asked that, as part of the public consultation which has just begun, we bring the details of the scheme to our clubs and supporters so that they can have their say.

The 14.5 mile route connecting Gravesham, Kent and Thurrock, Essex would be a three lane motorway connecting the M2 near Rochester and the M25 in Essex between North and South Ockendon. It would include a 2.4 mile-long tunnel under the Thames between the east of Gravesend and Tilbury – the longest road tunnel in the UK – and, at over 50 feet wide, the third largest bored tunnel in the world. This crossing would apparently halve journey times for those crossing the river via the M25 and Dartford.

Tim Jones, Project Director for Lower Thames Crossing, said: “For too long the Dartford Crossing has been the only way to get across the Thames east of London. It is a vital gateway, but carries more traffic than it was ever designed for and drivers there suffer from regular delays, severing communities and holding back economic growth.

"The Lower Thames Crossing is the most ambitious project of its kind ever in the UK and the biggest single road upgrade since the M25 was completed more than 30 years ago. It would almost double road capacity across the Thames to cut congestion, end the daily delays at the Dartford Crossing and boost the resilience of the whole road network. This consultation is an important opportunity for people to share their views on our proposals and help shape the Lower Thames Crossing."

On the south side of the Thames, the new road will link the tunnel to the A2 and M2 in Kent. On the north side of the river, it will link to the A13 in Thurrock and then junction 29 of the M25 in the London Borough of Havering.

The Lower Thames Crossing will be made up of:
• A 2.4-mile (4km) tunnel
• Approximately 14.5 miles (23km) of new road connecting the tunnel to the existing road network
• 3 lanes in both directions with a maximum speed limit of 70mph
• New structures (including bridges, viaducts and an underpass) along the length of the new road
• Improvements to the M25, A2 and A13, where the Lower Thames Crossing connects to them

There are a number of public consultation events, as follows:

Visit the Highways England website for more information and to give your views.