Football Programmes of Yesteryear No. 2: The FA Amateur Cup Final, 1960 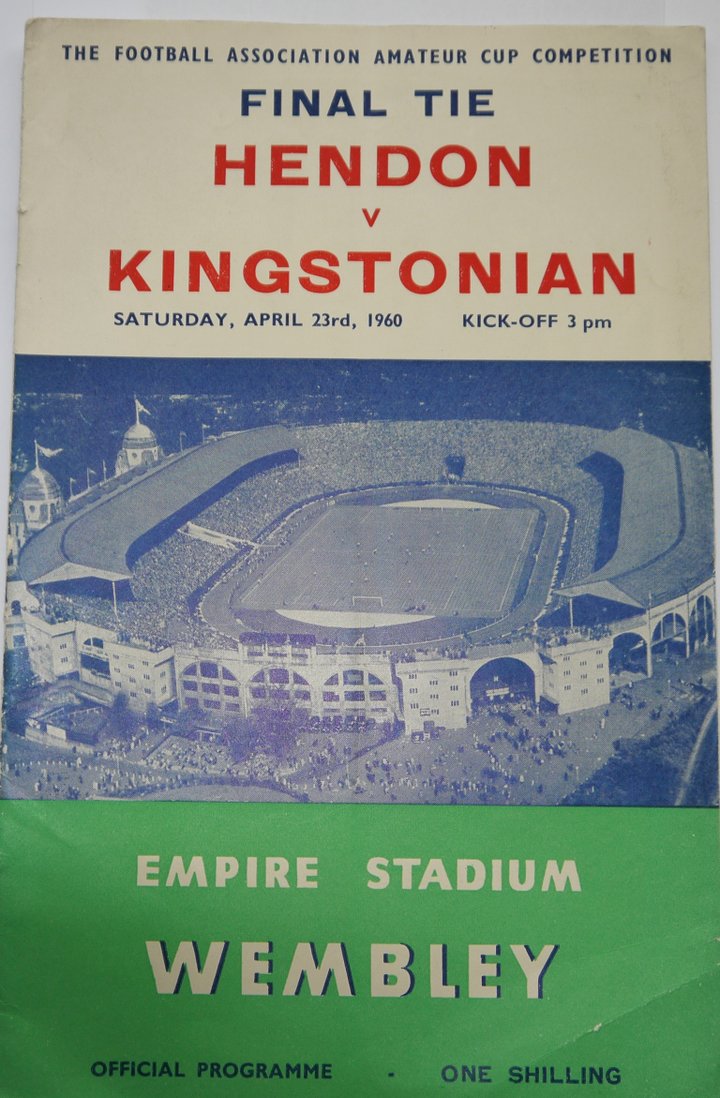 We’re heading back to the start of the swinging 60’s, a time of great change in society, and a time when the balance of power in the Non League game switched from North to South.

As 1959 ebbed to a close, the Big Book of Football Champions- surely a must for the Christmas stocking of any self-respecting football fan- was espousing the view that Crook Town, of the Northern League, were about to replace their rivals Bishop Auckland as the leading amateur club in the country.

It didn’t seem an unreasonable assumption. Crook had won the 1958-59 competition, defeating Barnet in the Final at Wembley in front of sixty thousand spectators, were coached by -it might be argued- the best Amateur footballer of all time, former Bishop captain Bobby Hardisty, whilst their attack was being led by another Bishop hero, Seamus O’Connell, a former League title winner with Chelsea.

As Crook went on to win the cup again in 1961 and 1964 the author of the article might claim he was right, but 1960 actually marked a turning point in the English Non-League game, in that it saw the Northern League dominance of the Amateur Cup come to an end. Consider this; in the 50’s the trophy had been won six times by clubs from the North-East- Willington, Bishop Auckland (3) and Crook Town (2). From 1960 until the competition came to an end in 1974, only three times more did the silverware head in that direction. The tide had turned. 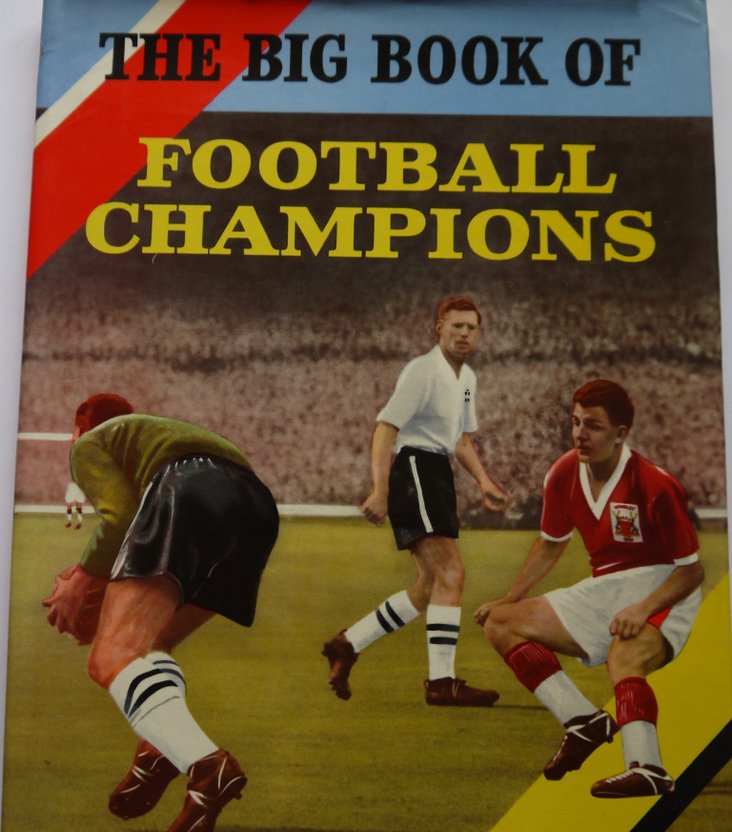 The Big Book of Football Champions- a must for Christmas 1959

Clubs from the Isthmian League were the main beneficiaries of the decline of the North-East superpowers. Hendon were twice winners once they joined the Isthmian League. Walthamstow Avenue, Wimbledon, Wealdstone, Enfield (twice), Leytonstone, Walton and Hersham and Bishop’s Stortford also emerged from our ranks to triumph. But we’re going to go back to 1960 now, when the two participants in the final, held at Wembley Stadium on Saturday April 23rd, were two teams familiar to all fans of the Isthmian League- Hendon and Kingstonian.

Hendon were not an Isthmian League club at this point. The Greens were in the old Athenian League, alongside familiar names such as Grays Athletic, Carshalton Athletic, Barnet, Enfield and Hornchurch, who at that point were named Hornchurch & Upminster. The 1959-60 league season had not been the particularly memorable for the club; they’d finished in mid table, eighth out of sixteen, and seventeen points behind league champions Hounslow Town. Remember, these were the days of two points for a win, so seventeen points was quite a distance!

To get to the Final, Hendon had defeated Vauxhall Motors in the First Round, Wimbledon in the Second, and Redhill (who ended the season only six points behind them in the league but were walloped six-nil on this occasion) in the Third. In the Fourth Round- effectively the Quarter Final- they travelled to the North East to take on West Auckland, the match ending in a 1-1 draw, and brought West back to Claremont Road for a replay. As you can see, we have the programme from that fixture, which was played on Saturday 27th February with a rather peculiar kick off time of 2.45PM. Printed on rather flimsy green paper, it is only eight pages long- and the previous owner has rather helpfully committed sacrilege and written the score on the front cover! It throws a ‘Personality Spotlight’ on Brian Figg, a painter by day, who scored the opening goal in that victory over Redhill and who was to score the second goal of the afternoon today. 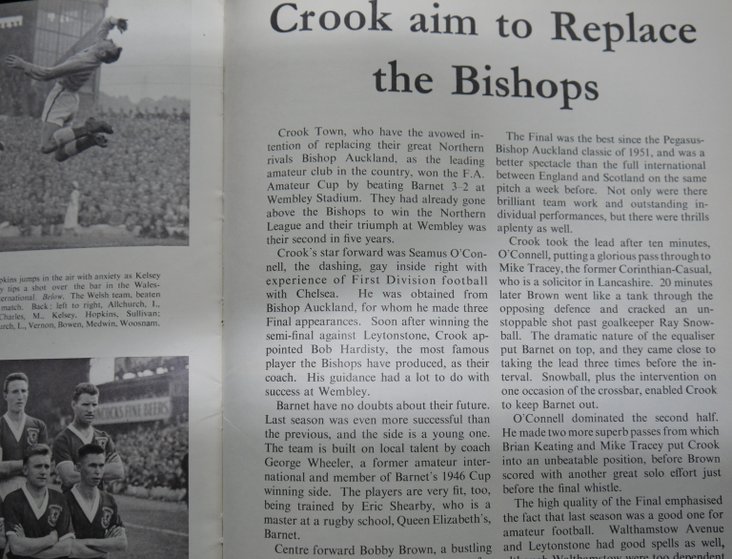 Crook tipped for the top

West Auckland, neighbours of Bishop Auckland (there are two miles between the towns, although West was perhaps more of a village at this point), were current leaders of the Northern League. The town was famous for two things- it was the final home of mass poisoner Mary-Ann Cotton, and the first home of the ‘*World Cup!’ The two were not connected.

The match ended two-nil to the home side, with the opening goal scored by centre-forward Miles Spector. Miles had previously played for Chelsea, and this was his sixth goal in the competition so far.

In the Semi-Final, Hendon defeated Enfield by two goals to nil, with the goals scored by Laurie Topp and Brian Figg. The match was played at a neutral venue, Brentford FC’s Griffin Park.

So, onto the Final at Wembley. This was the Greens fourth trip to play under the shadow of the twin towers, as they’d lost the Amateur Cup Final there to Bishop Auckland in 1955 and also played at the stadium in a wartime Middlesex Red Cross Cup Final, and in a test event when Wembley first installed their floodlights. 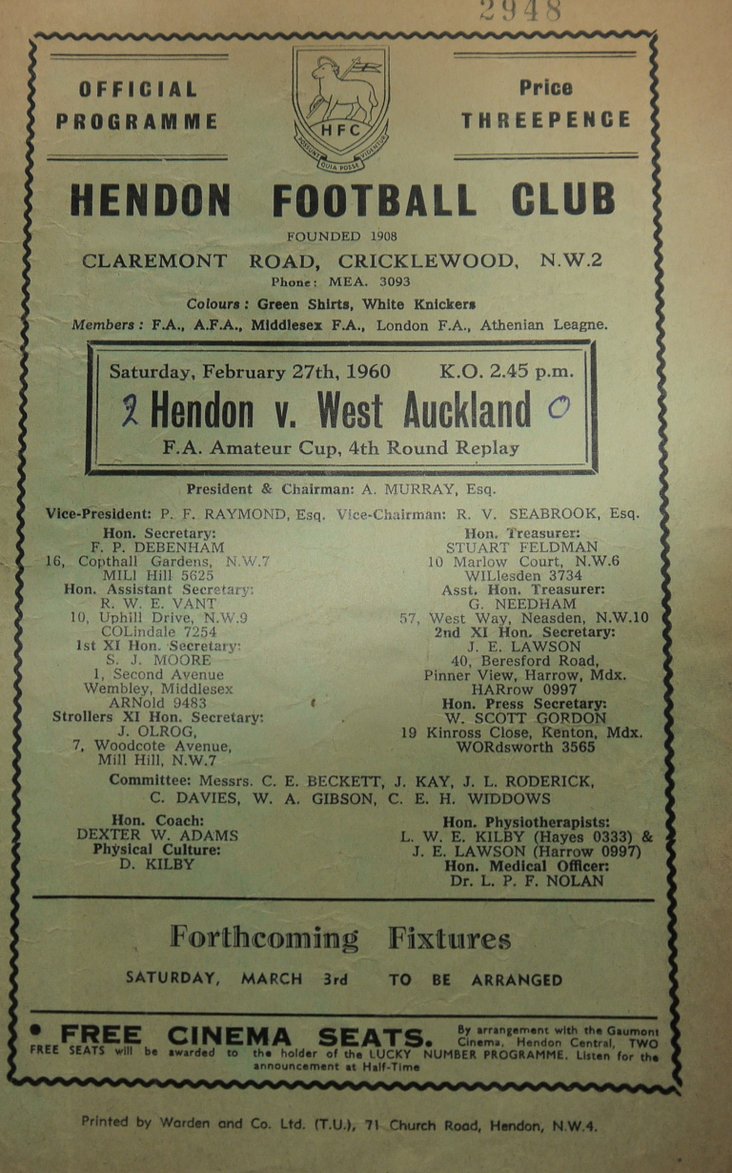 The Hendon line up for the Final looked like this:

Goalkeeper Peter Shearing was facing his former club, and went on to play for West Ham United, Portsmouth, Exeter City, Plymouth Argyle, Bristol Rovers and Gillingham, before retiring to Maidstone as a sub-postmaster.

Left back Laurie Topp spent his entire seventeen year career as an amateur, all with Hendon. He also played for the Great Britain side in two Olympic Games and made more than thirty appearances for the England Amateur side. 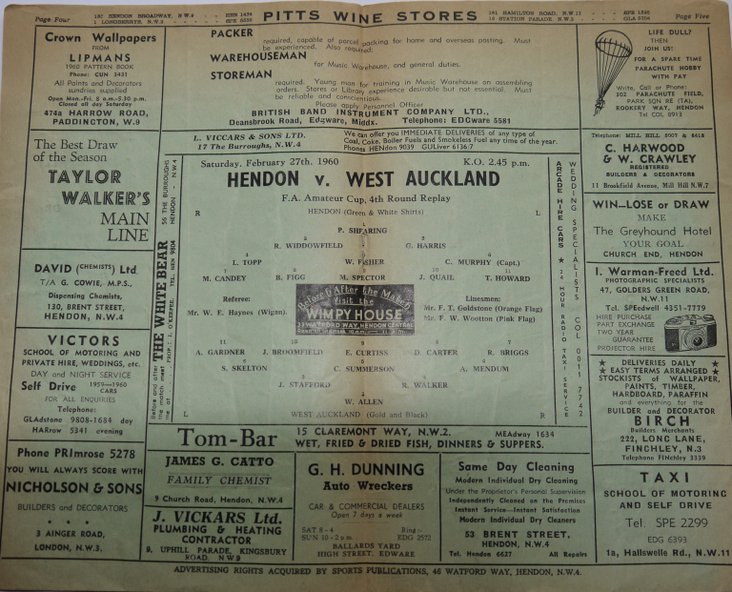 The Hendon and West Auckland teams from the Quarter Final replay

Centre-forward Miles Spector had previously played for Chelsea’s first team when still a schoolboy- indeed he had to get his headmaster’s permission to play and played truant for his initial trial with the Blues Reserve team!

Inside-left Jimmy Quail played his entire career for Hendon, and also played for Great Britain in the Olympics, as well as winning Northern Ireland Amateur caps.

Kingstonian were an Isthmian League club. They’d just completed the 1959-60 season in fourth place, three points behind the champions, Tooting & Mitcham United, level on points with Wimbledon and two points behind second place Wycombe Wanderers. This was their seventy-fifth anniversary year, and their first time at Wembley- although they had previously won the Amateur Cup, in 1933, when- after drawing the first match 1-1 at Dulwich Hamlet’s Champion Hill- they convincingly won the replay, held at Darlington’s Feethams, by defeating Stockton 4-1.

The programme contained a rather murderous tale of football being brought to Kingston in 784 AD. A West Saxon king named Cynewulf was apparently assassinated whilst visiting Merton (perhaps he admitted to being a Dulwich Hamlet supporter), and when the royal army caught his killer they swiftly cut off his head and had a kickabout with it on the streets of Kingston, using the doorway of Ye Olde Bentall Shopping Centre as a goal. The K’s of 1960 had moved on rather a long way from this period, and were a civilised bunch, who had despatched two of the North Eastern favourites on the way to the Final- Ferryhill Athletic in the Third Round and Crook Town in the Semi-Final. 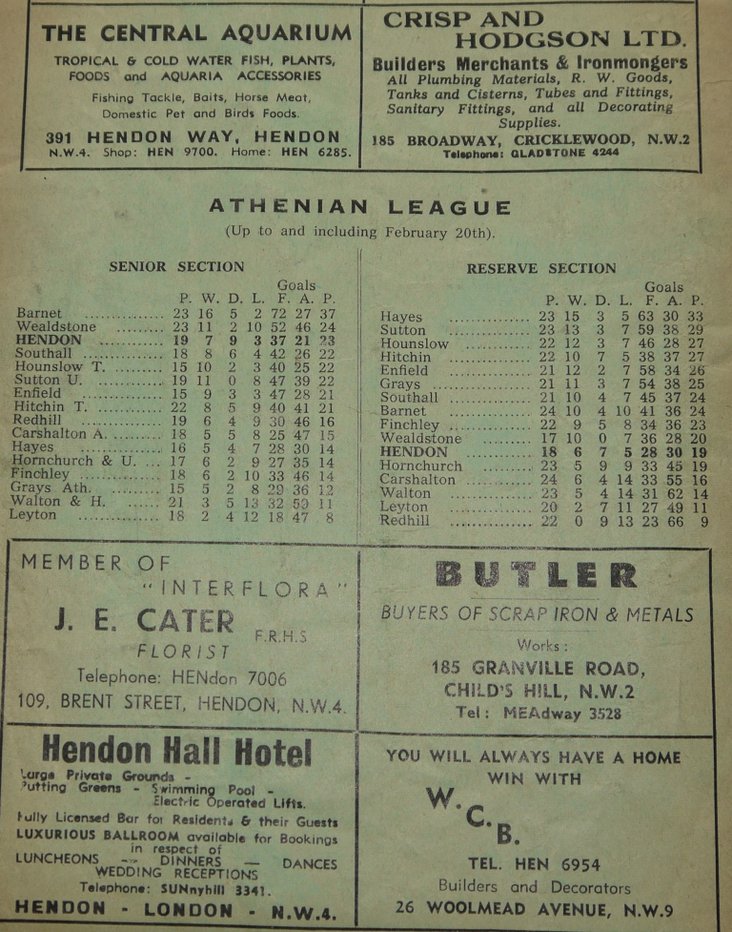 After a three-nil win at Histon in the First Round, Kingstonian put five past Letchworth Town in the Second- including a hat trick from centre forward John Whing. The Third Round saw them given a home tie against Ferryhill Athletic, and that ended three-three, before the long trip north for the replay was rewarded with a four-two victory, Whing again scoring three times. Carshalton Athletic were duly walloped four-nil in the Quarter Final, and the Semi Final had seen them drawn against favourites Crook Town. The match was played at Newcastle United’s St James’s Park, and goals from Reg Oakes and Jim Coates had silenced the Geordie masses and seen the K’s reach Wembley.

The Kingstonian line up for the Final looked like this:

Left half Les Gilson later played as an amateur for Notts County. He’d previously played for Hayes, and returned from Nottingham to play once more for the K’s, and for Leatherhead. 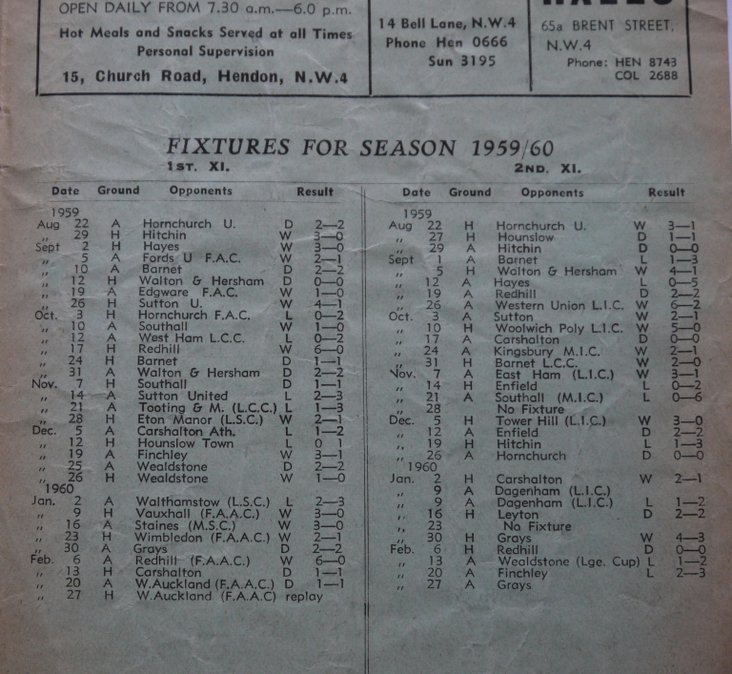 Hendon's results up until that Quarter Final Replay

Outside right Ken Harris had previously been on the books of Portsmouth and West Ham United.

Inside Right- and captain- Jimmy Coates played for the England Amateur side and represented Great Britain in the 1956 Olympics. He also played in Hong Kong and Singapore- and in Scotland for Queens Park and Dunfermline.

Centre forward John Whing is still the clubs record goalscorer, finding the back of the net two hundred and ninety five times for the K’s. In one match against Dutch side Delft he got eleven goals!

Inside left Hugh Lindsay went on to play as an amateur for Southampton, refusing manager Ted Bates pleas that he should turn professional. He also played for the Great Britain Olympic side, in 1960. 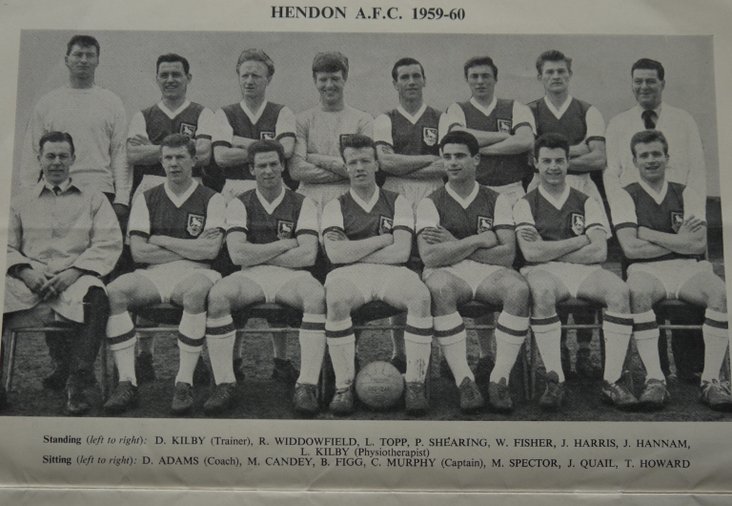 The Hendon Squad for the FA Amateur Cup Final, 1960

Kingstonian took a first half lead, Whing scoring his ninth goal of the tournament in the thirty eighth minute with a header from a Ken Harris cross. As the match ebbed away the K’s fans must have been ready to celebrate, but three minutes from time Hendon were level- Miles Spector setting up Laurie Topp to fire home from the edge of the area. Perhaps we were heading for a replay- but no! In dramatic fashion, with just one minute remaining, the Greens won the cup as Terry Howard put the ball in the net to make it two-one. There was still time for Kingstonian’s Reg Oakes to hit the post, but that was the last chance of the match and Hendon had a victory which only five minutes earlier had looked unlikely.

* West Auckland won the Sir Thomas Lipton Trophy in 1909 and 1911. The team, made up chiefly of coal miners, had to pawn their belongings to raise the cash they needed to take part in the tournaments, which were held in Turin, and won the trophy on both occasions- earning the right to keep it. They defeated Juventus 6-1 in the 1911 Final. 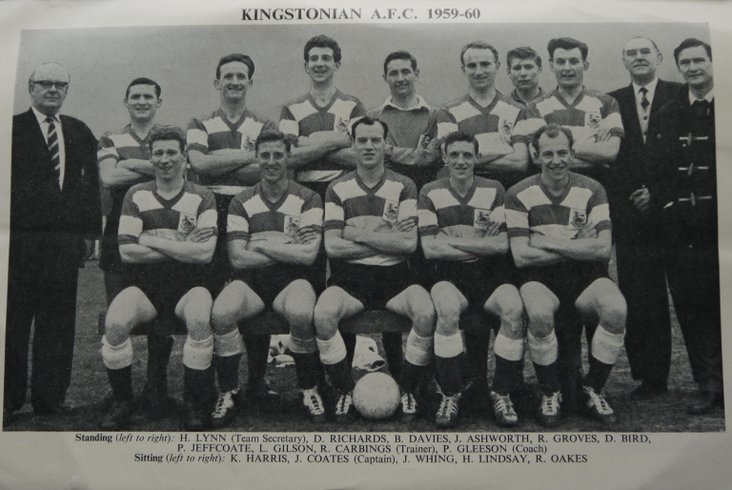 The Kingstonian squad for the FA Amateur Cup Final, 1960 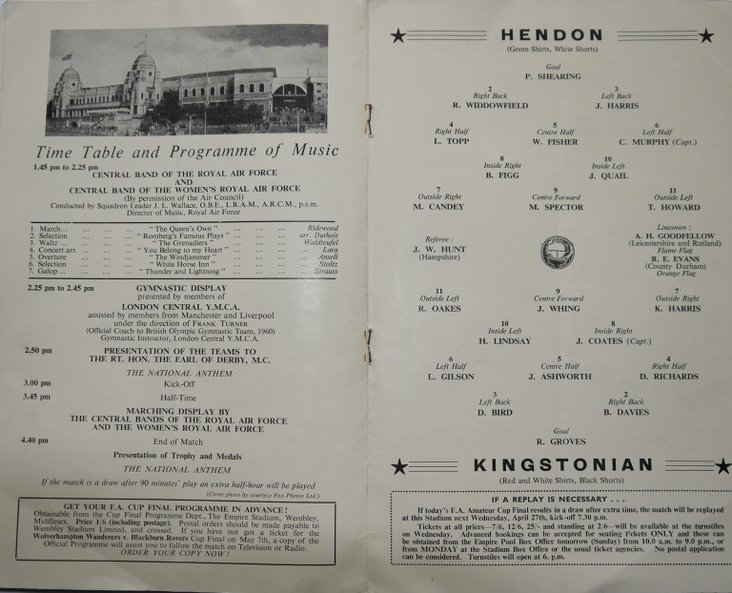 The line ups and the schedule for the afternoon 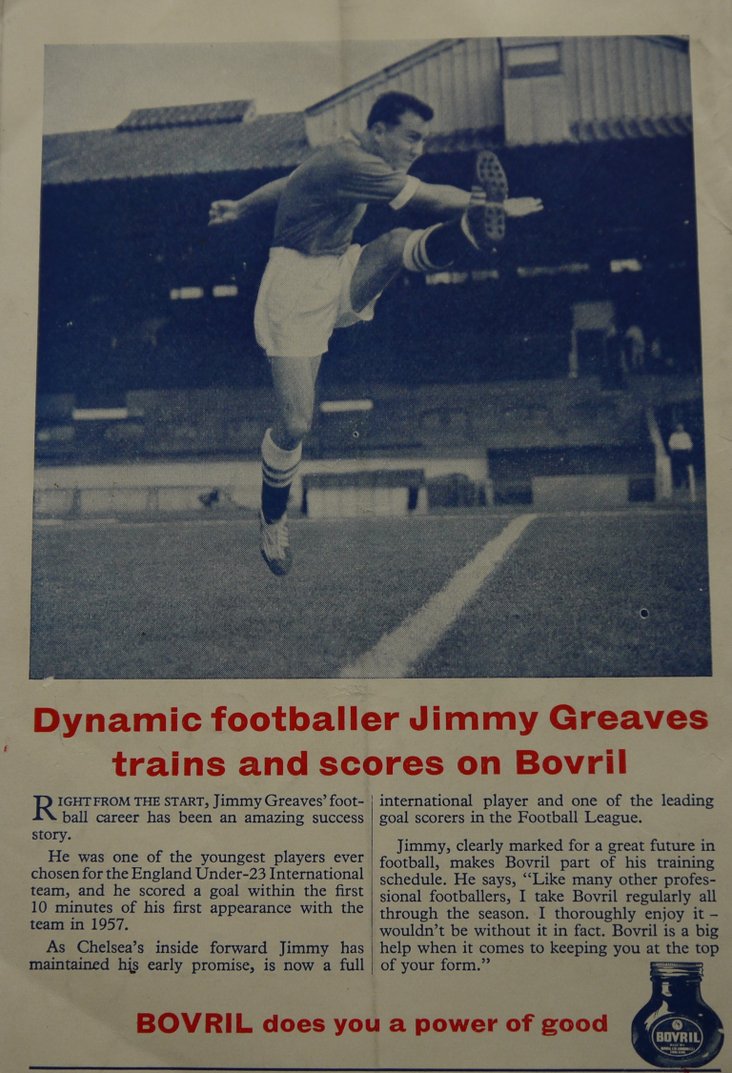 A tip for all top strikers- drink Bovril!

 A selection of Swans Staines Town bring in four