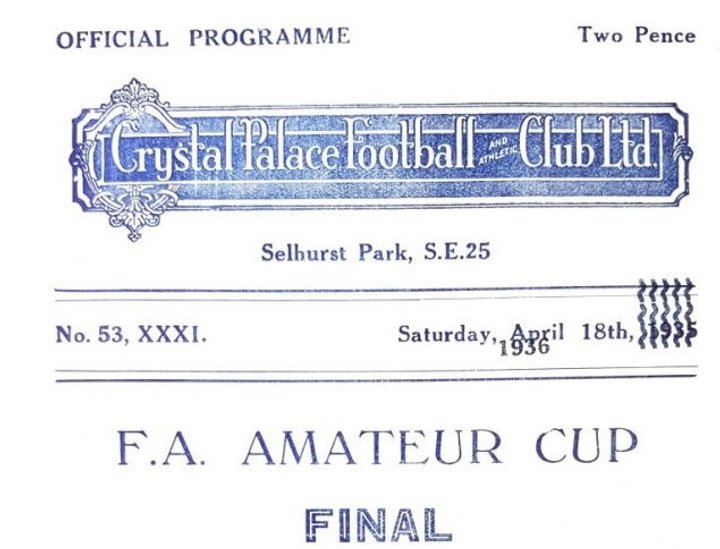 Guest contributor Stuart Tree takes us back to the mid 1930’s, to an FA Amateur Cup Final at Selhurst Park- and a replay at Upton Park

Before the amalgamation of the two famous amateur clubs, Corinthian F.C. and The Casuals, it was the former who usually captured all the headlines.

And justifiably so – they were the first global superstars of football, representing the entire England side, defeating Manchester United 10-3 an Bury – the record scorers in the FA Cup, by 6-0 in the forerunner to the Community Shield. 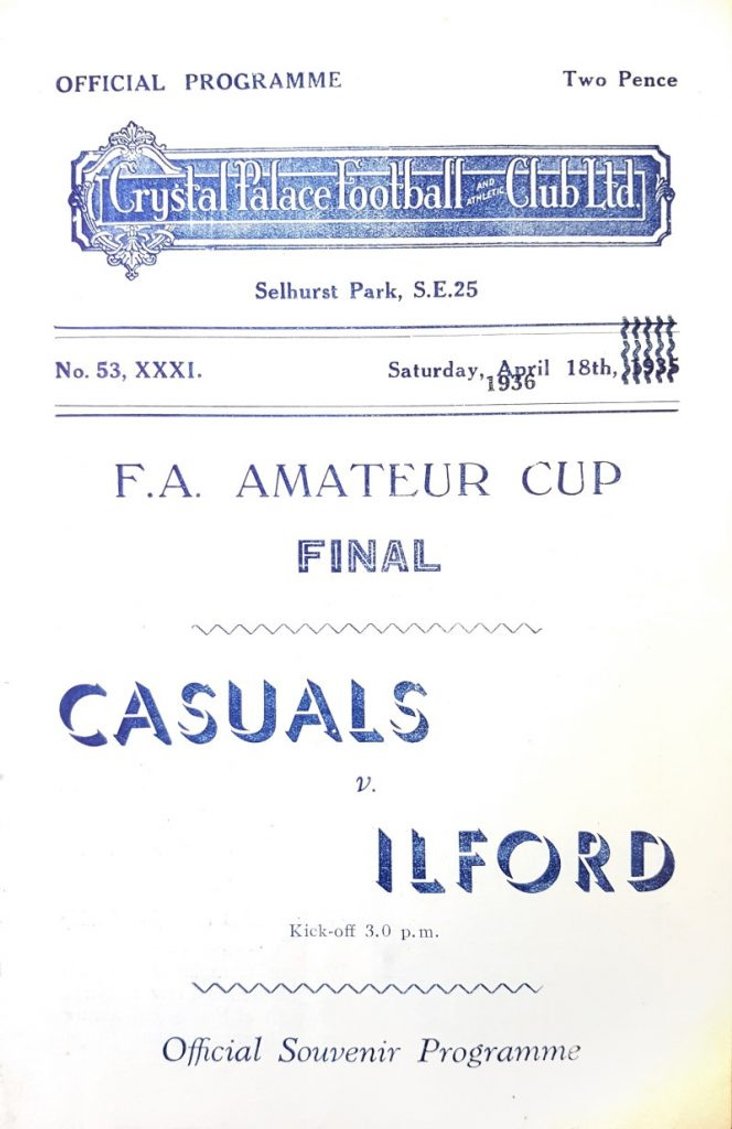 But The Casuals, who went about business in a modest style, achieved success of their own. The founder members of the Isthmian League also won the country’s finest Amateur competition – The FA Amateur Cup.

Casuals had competed in the very first tournament in 1893-94, defeated by Old Carthusians in the final at Richmond Athletic Ground. It was to be Casuals' last final appearance until 1936, where they’d meet Ilford in the final.

The Casuals had defeated Bishop Auckland 4-0 in the Third Round, ICI Alkali in the Quarter-Finals and Romford (3-2) in the Semis, in front of 18,000 at Dulwich Hamlet’s Champion Hill. A striker named Shearer scored the winner for Casuals four minutes from time. Ilford’s route to the final had seen them thump Enfield 5-0, defeat Cockfield 7-3 and best Maidenhead United 3-2 in front of 17,500 at West Ham.

Undoubtedly, there was real appetite for the competition which would peak in the post-war era with over 100,000 regularly attending finals at Wembley. 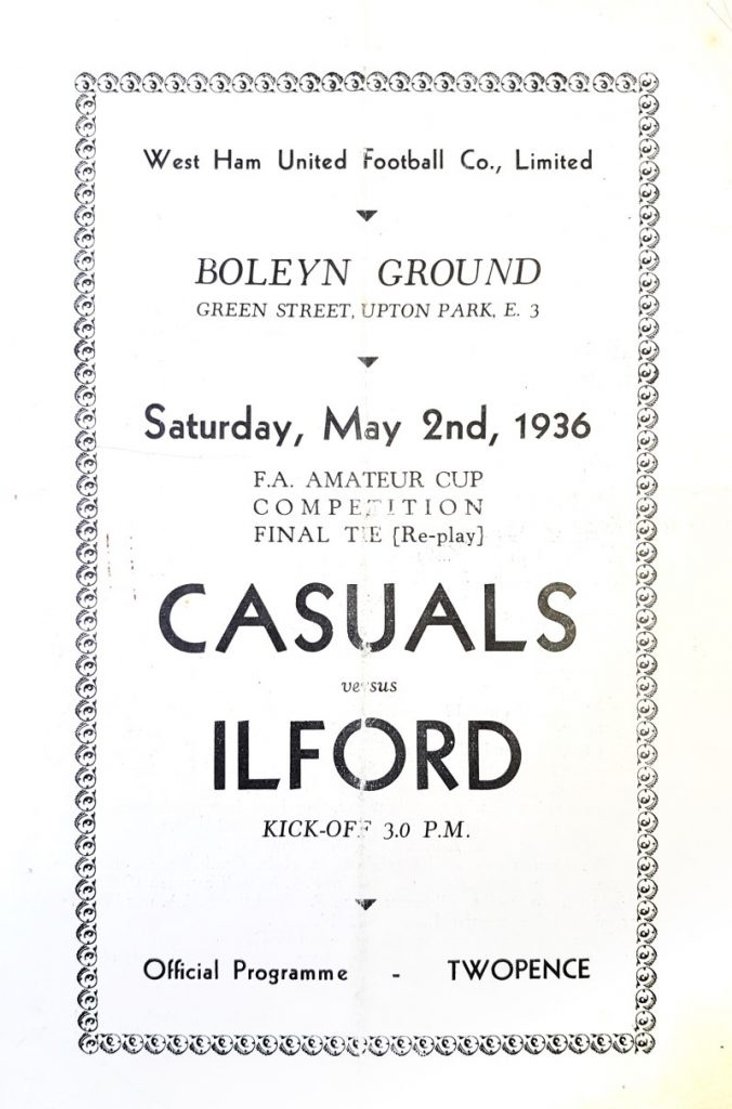 25,000 spectators packed into Selhurst Park for the final between Casuals and Ilford. The Casuals took the lead within the first ten minutes scoring with a cross-shot that left Tietjen helpless. But five minutes from half-time, Ilford equalised when Huddle was beaten by Braund’s header.

Despite reports of ‘exchanges of great vigour and scrupulous cleanliness’, no more goals were added in either the second half or extra time, so for the second year in succession, a replay would be required to crown the champions. West Ham’s Boleyn Ground would be the venue two weeks later.

Casuals were fancied for the replay; they had been below their best in the first game and Ilford had ‘several’ league games to complete during the fortnight between. Following such an arduous schedule, it was touted that the Old Boys would be easy victors. Though Saturday 2nd May heralded the start of the Cricket season, 27,000 (with gate receipts of £1,898) packed into Upton Park to see the two sides do battle once again. 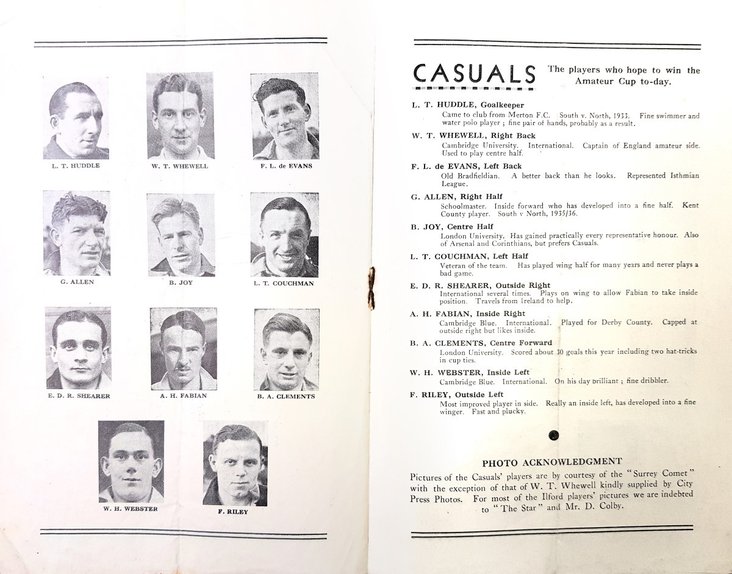 It wasn’t to be as straightforward as predicted for the Casuals. Ilford came out all guns blazing, and the first half of the replay produced a masterclass of goalkeeping by Casuals’ L.T. Huddle and resolute defending from Bernard Joy, described as ‘a Matterhorn of Defence’. The first half was all Ilford but were kept at bay by the last line of defence. The headlines were all about the ‘Class of Huddle’ indicating how vital was the custodian’s contribution.

The second half was a different matter, helped by the fact that Casuals scored shortly after the break. Shearer’s header was well placed past Tietjen in goal. Scorer turned provider with twelve minutes remaining as pass to Webster was delightfully weighted and the forward couldn’t help but score. It could’ve been more, but Casuals had been wasteful in front of goal and it was only due to fine wing play that they were victorious. Fatigue was possibly a factor in Ilford’s defeat. Casuals wouldn’t be bothered… Captain F. de L. Evans was handed the most famous trophy in amateur competition and crowned champions. It would turn out to be the only time that Casuals, and latterly, Corinthian-Casuals managed the feat.

Programmes were issued for both games and despite being modest eight page editions, they now sell for hundreds of pounds each, such is their rarity.

Capping off the season in style, it could’ve been more; Casuals almost captured the league and cup double, finishing second in the Isthmian League to Wimbledon, by seven points. The cup win was a magnificent milestone for the club but also marked the twilight for The Casuals – as just three years later, they’d merge with the Corinthians to form the club we all know today. 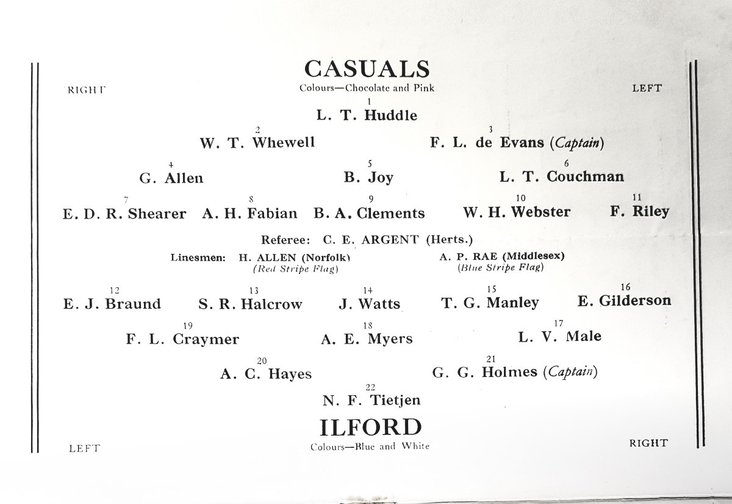 How the two teams lined up

In the 1960s, interest in the Amateur Cup declined and crowds for the final dropped to less than half the level of the early Wembley finals. The last Amateur Cup final was held on 20 April 1974, and Bishop’s Stortford became the last tournament winners, defeating Ilford 4–1. In the same year, the FA abandoned its policy of classifying all clubs as either fully professional or fully amateur, and accordingly the Amateur Cup was abolished, somewhat replaced by the Vase and Trophy that are still competed for today.

Thanks to Stuart for sending this in. If you've an article you'd like to see published here, then please get in touch. Contact Ian on townsendaround@gmail.com