Goals, drama, so many penalty kicks that the Saints and the Geordies didn’t get home until midnight- last night had it all! 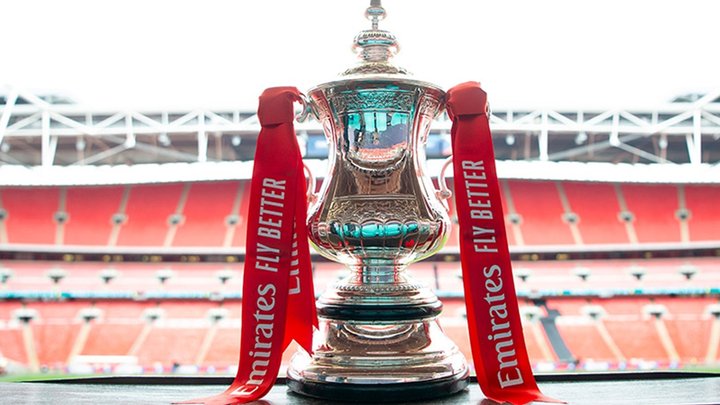 We had FA Cup replays and Velocity Trophy matches. Here is the detail you need.

Eight BetVictor Isthmian League sides stepped out to play FA Cup replays last night, and six of them emerged victorious- the only two departing the competition losing to Isthmian competition (not that they’ll feel any better because of that).

Herne Bay headed to AFC Croydon Athletic, and weren’t distracted by the view of Croydon Crematorium, Zak Ansah managing to get the only goal of the game two minutes after the break. Bay travel to Haringey Borough on Saturday. 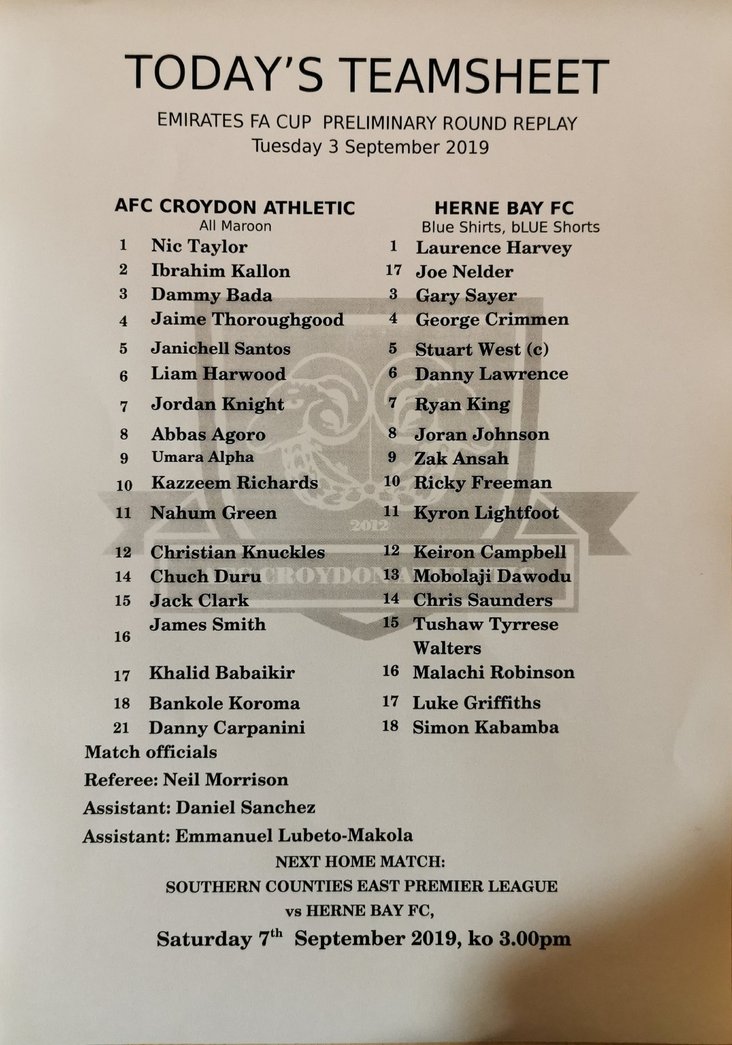 We had two sides taking on Southern Combination Football League opposition, as VCD Athletic and Chipstead travelled to Uckfield Town and Hassocks respectively. Vickers fell behind after six minutes, but Henry Ikeije drew them level four minutes after the break. That was the end of the scoring, and the match went to penalties, seeing VCD emerged victorious 5-4. The Chips went into the break of their match against the Robins a goal to the good, Tom Collins with it, but Hassocks drew level in the forty ninth minute, and the match remained finely balanced until Dan Moody put the visitors ahead eighteen minutes from time. Jensen Grant then gave them a two-goal cushion in the eighty second minute, but there was still time for some late jitters as Hassocks pulled another goal back four minutes later. VCD will host Moneyfields in the next round, whilst Chipstead travel to Westfield.

Witham Town took on FC Clacton for the second time, and for much of the match it looked as if they were on the way out. An early goal put Clacton ahead, and although Oliver Bell got an equaliser the Eastern Counties League side were ahead again by half time- and stayed in front until the very last minute of the match, when Kye Jude got an equaliser for Town. Three minutes into added time George Bugg put Witham ahead for the first time, and they held on for victory- and earned a trip to Stamford on Saturday.

Ware and FC Romania met for the third time this season, and finally we had a winner. Liam Hope and Patrick Adamson gave Ware a first half lead, and although Joshua Williams got one back for the visitors it wasn’t enough to force extra time. FC Romania managed to finish the match with ten men- something that’s becoming almost the norm, as Cristi Iacob’s departure for an early shower was their fourth in six matches. The same player has fifty percent of that total. Ware will welcome Leiston to Wodson Park in the next round.

Brentwood Town picked up their first victory of the season, and Harlow Town were on the receiving end of it. A red card for Oliver Gnandi after only five minutes meant that the Blues had a man advantage, and a minute later they had a goal advantage, too, as Jason Williams scored from the spot. Jacob Wiggins made it two after eighteen minutes, and although the Hawks got a consolation right at the end, Christian Adu Gyamfi with it, Brentwood went through to face Bowers and Pitsea in the next round. 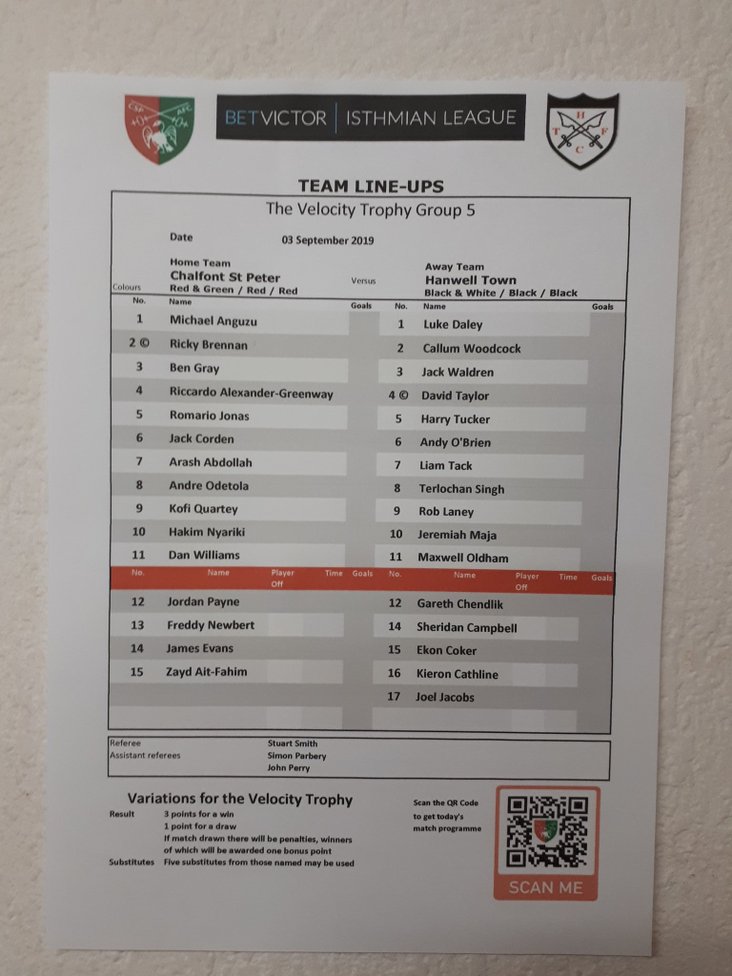 There were lots of goals in the Velocity Trophy, but we’re going to start our round up at Chalfont St Peter. The Saints were hosting the Geordies, Hanwell Town, and it was the visitors who went ahead after five minutes, Jeremiah Maja scoring from the spot. Riccardo Alexander-Greenaway put the hosts level after twenty four minutes, but parity lasted only six minutes more before Rob Laney scored for Town.

Kofi Quatrey equalised for the Saints four minutes from time, and in accordance with the new rules the match went to a penalty shootout at the final whistle, the winners earning a bonus point. Those winners were the Saints, but only after scoring their seventeenth penalty as the shootout ended seventeen-sixteen. Both sides took eighteen penalties each.

That was in Group Five, and we’re going to go through the rest of the groups in numerical order to save on confusion. 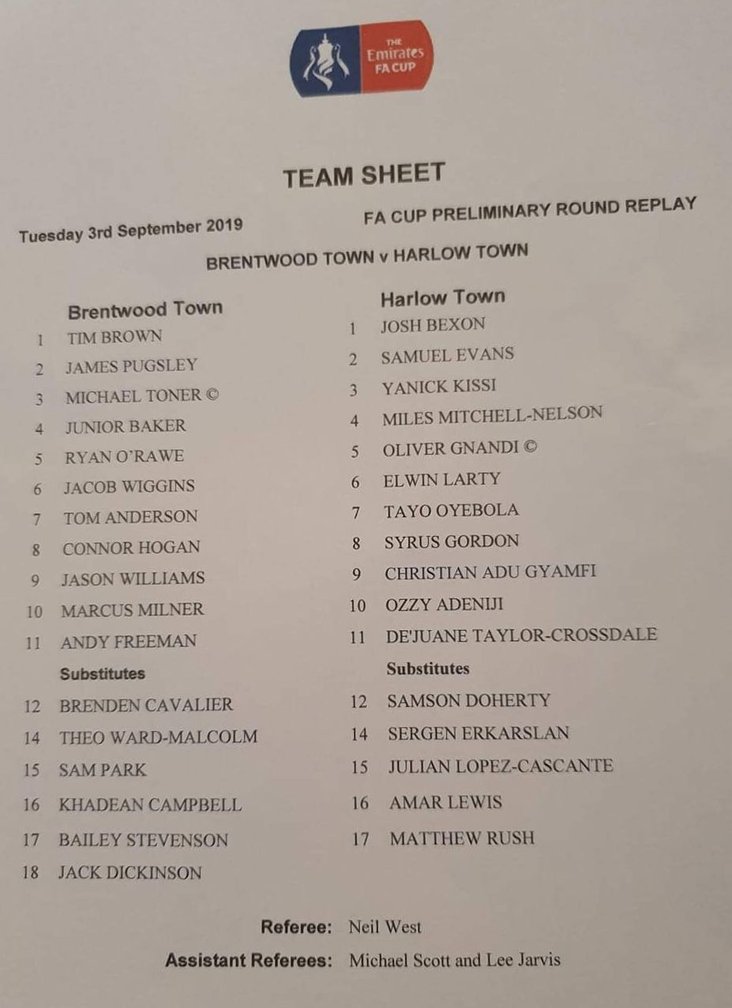 We had three matches in Group One, and Bury Town were the big winners, walloping Felixstowe and Walton United by five goals to one. Jarid Robson got the first two within eleven minutes of kick off, Ollie Hughes making it three-nil at half time. Tom Debenham got one back from the spot three minutes after the break, but if that gave the Seasiders hope it didn’t last for long, Emmanuel Machaya making it four and Ryan Jolland scoring number five.

Maldon & Tiptree also went big, defeating North Division promotion favourites Coggeshall Town by four goals to one, Jorome Slew (2), Stuart Collins and William Cracknell finding the back of the Seed Growers net. Chris Regis got one back for the visitors. Heybridge Swifts travelled to AFC Sudbury and left with the points, David Rodriguez-Lopez and JJ Da Cruz getting their goals as Sam Girling replied for the Yellows.

Group Two saw one match, and Barking won that convincingly, four-one winners over Grays Athletic. Kiernan Hughes-Mason gave the home side an early lead, but they held it for only three minutes before Kolawoje Oshun equalised for Athletic. Ryan Mallett restored the home advantage thirteen minutes from half time, but it took until the last ten minutes of the match for Barking to make sure, Johnny Ashman and Emmanuel Ighorae adding two more.

We headed to Sussex for Group Four, and each match saw a two-nil win. Burgess Hill Town got a modicum of revenge for their league defeat to Haywards Heath Town by defeating their closest rivals, Josh Short and Steven Sargent doing the damage, whilst Three Bridges won an A264 derby as Andrew Sesay and Andre McCollin scored against East Grinstead Town. Hastings United travelled along the A27 to Chichester City and the journey home would have been made easier after Kenny Pogue and Thomas Chalmers steered them to victory. 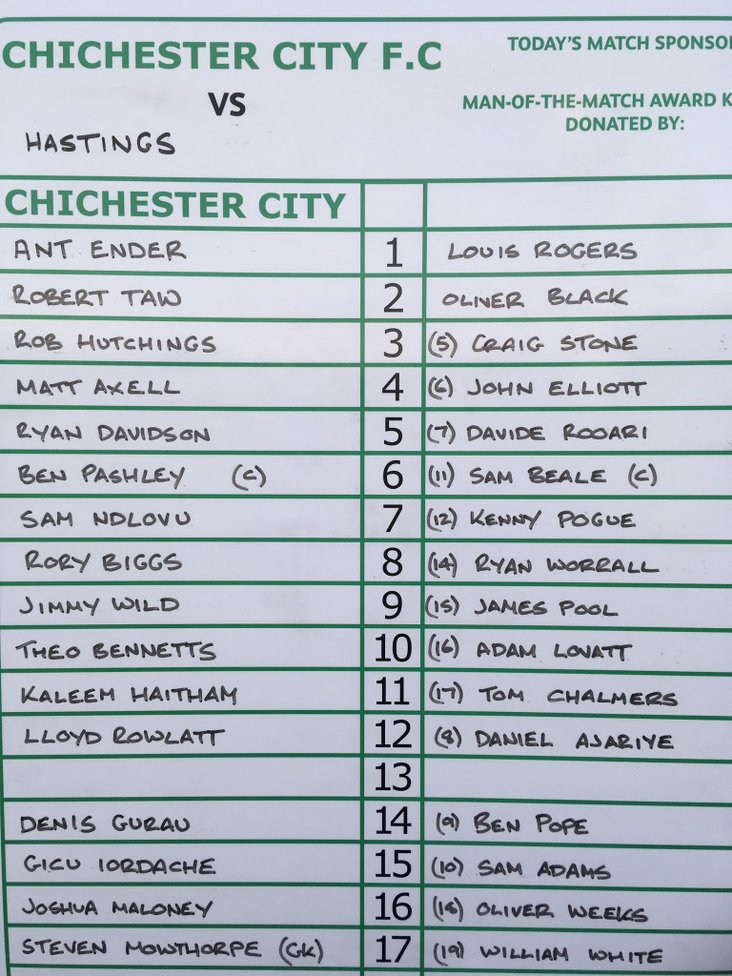 We were in Essex for Group Six, and Tilbury were the big winners, goals from Ola Ogunwamide, George Sykes and Toby Aromolaran easing them to victory at Basildon United. Canvey Island and Hullbridge Sports couldn’t manage a goal between them, but Sports managed five in the shootout to claim the extra point, Canvey getting only three.

Group Seven was a group of contrasts. Ashford United and Ramsgate only found the net after the match had ended, the Rams winning 3-2 on penalties, but down the road Faversham Town couldn’t stop scoring, becoming the second club this season to smash seven goals past Hythe Town. Jack Sellens got the first three before half time, and although an own goal gave Hythe some hope, Robert Lawrence, James Miles, Matthew Bourne (who scored at both ends) and Mitchell Chapman soon extinguished that.

In Group Eight Ashford Town’s search for victory continued as John Roberts and Jayden Clarke struck to earn victory for Bedfont Sports, whilst a five goal thriller at Northwood Park went the way of the visitors, Staines Town. Che Krabbendam put the Swans ahead just before the break only for Charlie Halford to equalise just after it- and Halford got a second equaliser after Jamie Philpot had restored Town’s lead. Krabbendam had the last word, however, five minutes from time.

Group Nine saw Phoenix Sports pick up their first win of the season, and they did it at Cray Valley PM. Jeff Duah-Kessie got both of Sports goals, after Dominic Ogun-Forster had earlier put Mills ahead. Finally, Sittingbourne were two goals up at Sevenoaks Town after only twenty three minutes, and own goal and Kane Phillip giving the Brickies the advantage. Goals from Adrian Stone and Ainsley Everett after the break saw Town draw level, and the home side won the penalty shootout by four goals to two.