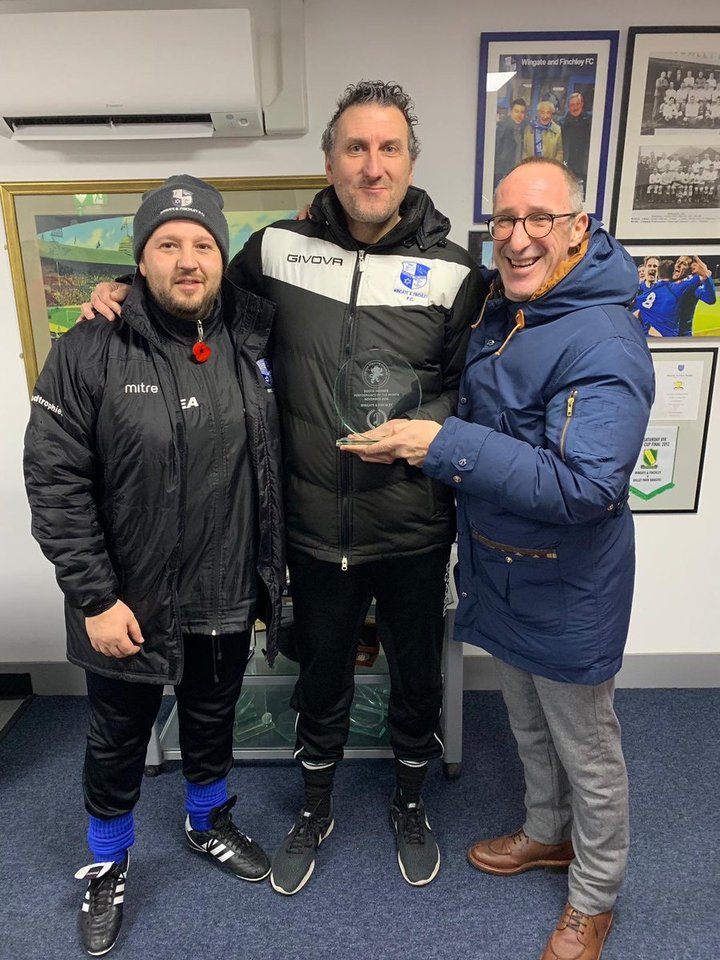 We had every number from one to eight- and enough rain to float an ark. Here’s our round up.

Wingate and Finchley might not be having the best of times in the league at the moment, but they’ve made the FA Trophy their own-and yesterday they killed another giant, following up their win over Chippenham Town with a comprehensive victory over Dulwich Hamlet. The biggest surprise was that it took them 27 minutes to take the lead, a number of chances coming and going before Rob Laney put them ahead. Laney made it two on the hour, and despite Hamlet pressure the Blues were worthy winners. The headline image shows the Summers Lane side celebrating their Performance of the Month Award for November, presented by Supreme Engraving for that victory over Chippenham- perhaps they’ve now put themselves in line for another!

Another of our sides through to the Second Round are Carshalton Athletic- although we always knew we’d have at least one representative, as they were taking on Dorking Wanderers. There was only one goal, and it went to Paris Hamilton-Downes, who managed to beat Slavomir Huk just after the hour. Sadly, we lost Hayes & Yeading United, who put up a valiant fight away to the holders, Brackley Town, retrieving a 1-0 and 2-1 deficit to equalise before falling to two late goals. Hassan Jalloh and Scott Donnelly scored the goals- and it wasn’t all bad news, as back in the League title rivals Marlow and Bracknell Town both lost!

The matches at leaders Lewes and bottom placed Whitehawk started but didn’t finish (although the latter was out Bostik Matchday Feature so you can read about it HERE), but the clash between Worthing and Haringey Borough managed to both start and finish, and allowed Tom Loizou’s side to move level on points with the Rooks and record a remarkable eighth successive victory. Joel Nouble and Rakim Richards found the net, one in each half, as Worthing continued to search for form- uncharacteristically they’ve now only picked up four points from their last twelve, and drop to seventh.

Kingstonian fell behind as early as the fourth minute, Dan Smith scoring for a Bognor Regis Town side giving a debut to Saturday morning signing Ed Sanders, the centre back coming in from Whitehawk as the Rocks continued to suffer a defensive injury crisis. But this goal had the effect of poking a wasps nest with a stick, as the K’s charged back and scored four in reply- James Daly, Shaun McAauley and Louie Theophanous making it 3-1 by the break, Elliott Buchanan with the fourth after the break. Leigh Dynan’s side go fourth, whilst the Rocks are twelfth.

Goals from Adam Yusuff and Alfie Paxman gave Folkestone Invicta a 2-0 win over Bishop’s Stortford and moved Neil Cugley’s side up to thirteenth, whilst the Taydal Stadium saw seven goals, as Brightlingsea Regent went three-nil and then 4-1 up against Corinthian-Casuals, only to have to hold on as Casuals closed the gap just before the end. Jordan Barnett, Billy Hunt and Aaron Condon but Regent into a commanding lead, and although Gabriel Odunaike made it 3-1 it was soon four, Condon again finding the net before the break. In the second half Max Oldham reduced the arrears, and then two minutes before the end Hakeem Adelakun brought it back to 4-3 and set up a tense finish, but the home side held on for the points and climb to seventeenth.

At the Harlow Arena Leatherhead managed to let a two goal lead slip, as the home side came from behind to take a point. Ibrahim Olutade and a spot kick from Shaun Okojie gave the Tanners the advantage, but Tom Hitchcock and Nathan Koranteng levelled matters; whilst finally Merstham defeated Potters Bar Town, Walter Figueira scoring the only goal of the game.

We had an eight, a six and a five in the North Division, and we’ll start with the eight!

AFC Sudbury were the biggest scorers in the Bostik League, finding the net an incredible eight times against bottom side Dereham Town. It was three-nil at the break, Paul Hayes (2) and Callum Harrison making things comfortable for the yellows, but they got more comfortable still when Reece Harris managed an eight minute hat trick soon after the break to make it six-nil.

Joe Gatting got one back for the Magpies, and then the match went quiet (by its earlier standards) until four minutes from time, when Thomas Monk made it seven. Gatting reduced the gap once more, but only for a moment, as Mekhi McKenzie made it 8-2 right at the end.

Brentwood Town were the next highest scorers, managing six at Mildenhall Town. A hat trick from Charlee Hughes, two from Tony Stokes and one from Rob Budd saw Town go tenth, with ten points from their last twelve.

Heybridge Swifts only got five at Romford, Matthew Price (2), Harrison Chatting, Jack Adlington-Pile and Elliott Ronto with the goals that see Julian Dicks side end the day in fifth place. Romford saw Reece Hewitt get a first half equaliser and Thomas Potter get a second half red card, as Swifts won 5-1.

Bowers & Pitsea are two points clear at the top of the table, but were made to work hard by Soham Town Rangers yesterday, the away side going ahead from the spot in the 25th minute, Sam Mulready finding the net. Bowers equalised just before the break through Lewis Manor, and the second half was the David Knight show, the substitute coming on for James Thomas with thirty five minutes remaining and scoring twice to keep his side at the summit.

Maldon & Tiptree are second, the Jammers coming from behind to defeat Felixstowe & Walton United 2-1. Miles Powell gave the Seasiders the lead with twenty nine minutes remaining, but that forced the home side into action, and goals from De-Carrey Sheriff and Eddie-Louis Dsane made put them ahead, and gave them their seventh win from their last eight- with only two points dropped during that period.

Coggeshall Town are third, goals from Sam Bantick, Conor Hubble and Ross Wall easing them to victory over Great Wakering Rovers, whilst Aveley slip to fourth, the Marc Harrison revolution continuing at Tilbury who saw goals from Oliver Spooner, Lewis Smith and George Sykes give them a 3-0 win at Chadfields. The Dockers have now won four of their last five.

Harrison’s former club, Basildon United, were twice ahead at Grays Athletic but left with only a point, Luke Stanley and Callum Taylor finding the net only to see an own goal and Aron Gordon earn the home side a point, whilst Witham Town continued their good form, a Johnny Ashman goal earning them the points at Canvey Island and setting them up for yet another clash with neighbours Coggeshall Town on Friday evening.

Bury Town are eighth, an Ollie Hughes double enough for the points at home to Barking, for whom Darelle Russell replied.

Marlow still lead the way, but the blues will be looking over their shoulder at their visitors after falling three-one at home to third place Waltham Abbey. Billy Holland and Ross Dedman gave the Abbotts a first half lead, only for James Clark to give Marlow hope fifteen minutes before the end. But any hope of a home comeback was crushed nine minutes from time, as Timothy Ogunrinde made it 3-1 and left the Abbotts only two points behind their hosts.

Hayes & Yeading United are second, only one point behind Marlow with three matches in hand, but the biggest surprise yesterday was that Bracknell Town, so often the big scorers themselves, conceded SEVEN at now eighth placed Ware. Liam Ferdinand managed to score two for the Robins, but he was eclipsed by Adams Brandon who got three of his own, whilst Leigh Rose, Fraser John, Jordon Watson and Dave Cowley scored the other four to send the Wodson Park faithful home damp but happy.

Bedfont Sports are the form side in the division, and they managed their fifth win from six- the other was drawn- Charlie Postance scoring all four goals as they walloped Egham Town 4-1. The Egham consolation was scored by Harry Tucker. Sports are up to ninth, whilst Cheshunt are fifth, goals from Oluwole Akinsanya and Jason Hallett- one in each half- giving the Ambers victory at Uxbridge.

Ashford Town continued their good form- only one defeat in their last seven games- with a 2-0 win over Chalfont St Peter, goals from James Cottee and Nebay Haile doing the damage. The Tangerines are in sixth, whilst Northwood are seventh, the Woods sharing four goals equally with twelfth place Hanwell Town, Imran Uche and Ben Pattie scoring for the home side at Northwood Park whilst Will Wambeek and Tom Collins replied.

The match between Molesey and Tooting & Mitcham United was abandoned due to a waterlogged pitch.

After fifteen games unbeaten, game sixteen was too much for Cray Wanderers, who finally fell to defeat- and we’re running out of superlatives to describe Horsham’s recent performances, a hat trick from Rob O’Toole and a late Charlie Harris goal giving them a 4-2 victory over the leaders and moving the Hornets up to third. Ben Mundele and Archie Johnson scored for the leaders, who are still eight points clear at the top of the table- but all credit to Horsham, who have but one defeat in their last ten league matches.

Hastings United got back to winning ways in second place, but had to come from behind at home to VCD Athletic, for whom Alastair Gordon got a first half goal. United equalised through Jamie Fielding in the 55th minute, and Tom Climpson earned them victory seventeen minutes later. Whyteleafe are fourth, and scored four in a seven goal thriller at home to seventh place Hythe Town, for whom goalkeeper Henry Newcome was making a debut after moving from Margate. Matthew O'Donoghue, Harvey Bland and Lauris Chin sent Leafe into a 3-0 lead, and although Chris Kinnear made it 3-1 just before the break O’Donaghue struck again fourteen minutes after the break. Junior Alkhionbare reduced the arrears, but although Zak Ansah made it 4-3 in the very last minute it was too late for Town.

Ashford United are sixth, and scored all four goals in their 3-1 win at Ramsgate, Sam Corne and a Danny Parish double at the right end giving them victory- and making it sixteen points from their last eighteen.

Just behind Hythe, in eighth place, are Phoenix Sports- and they had to come from two goals down at home to Faversham Town to grab a point. Harry Goodger and Luke Griffiths gave the visitors a commanding lead, but it turned out not to be all that commanding after all, as Alex Teniola and Lee Bird brought the home side level.

East Grinstead Town were the days biggest scorers, charging into a 4-0 lead inside twenty four minutes at Herne Bay. Gregory Cundle (2), Ryan Johnson and Leo Mazzone did the damage, and although a Jake Embery double gave the scoreline some respectability in the second half Jacob Hutchinson made it five for the Wasps, moving them up to eleventh.

Sittingbourne had taken only two points from their previous twenty seven, but got back to winning ways in impressive style at Woodstock Park. Tom Loynes and Ben Fitchett put them two up after seven minutes, David Smith made it three before the break, and although Thomas Ripley got one back for Sevenoaks Town just before the end there was still time for Gil Carvalho to make it 4-1.

Our two other matches ended all square. Greenwich Borough grabbed a 2-0 first half lead at home to Three Bridges, Reece Deakin and Ryan King-Elliott with the goals, only to see a second half double from substitute George Gaskin draw Bridges level after the break.

Finally, a late Matt Loaring goal saw Guernsey get a point at home to Whitstable Town, for whom Jordan Wright had scored the opener in the first half.