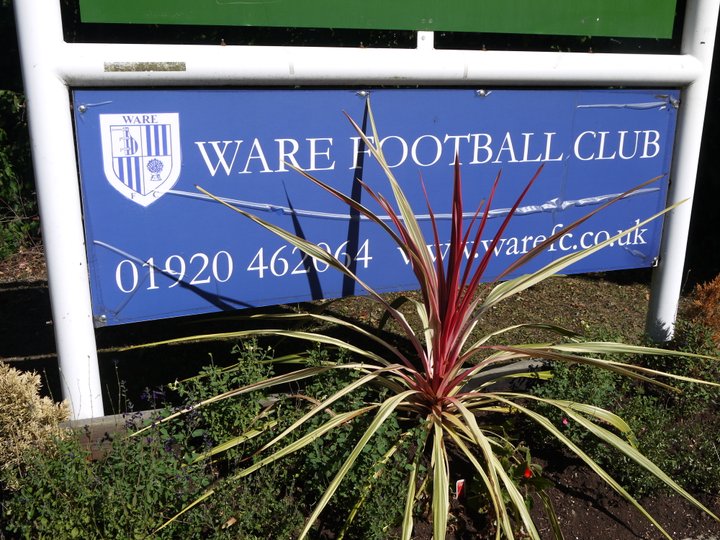 Hanwell Town and Ware have opened up a gap. Can they be caught? And with only eight points between third and tenth, who might force their way into the top five? It’s our preview of all the South Central action.

With five match unbeaten runs both Hanwell Town and Ware are setting the pace at the top of the South East Division. Both have thirteen points from fifteen, and both last lost against Westfield, but with the yellows having just recovered from a three match run of defeats both of our top two have been able to open up a gap on the side in third place.

The Geordies are collecting for a foodbank before their match with Bracknell Town tomorrow, but they can’t expect any charity from their visitors- on the pitch, at least. The Robins are nine matches unbeaten- and have won seven of them, charging up the table as a consequence to find themselves only a point off the top five with a game in hand.

Second place Ware also have a tough match in prospect, as they entertain an inconsistent Tooting and Mitcham United. The Terrors have slipped to eighth due to winning only two of their last six, and yet with three matches in hand over most of the sides above them could be right back in the promotion mix if they rediscover their form.

Westfield have put thise three defeats behind them and rediscovered their form, taking four points from their last two matches. They should surely be favourites to pick up three more as they host FC Romania, who have two wins and eight defeats from their last ten. Field start the day six points behind Ware and seven behind Hanwell, so will be hoping that the Robins and the Terrors can do them- and themselves- a big favour. MATCH POSTPONED.

Fourth place Uxbridge take on tenth place Barking. Uxbridge have won only one of their last five- but they’ve only lost one of them too, and their three draws were against the top two and Chipstead- our form side at present. The visiting Blues have become rather inconsistent, with a form record that reads lose-win-lose-win-lose, so they’d like that patter to continue for just one more match; particularly as the first defeat in that run came against Uxbridge. MATCH POSTPONED.

Chertsey Town have rediscovered their early season form of late, unbeaten in six matches during which they’ve taken sixteen points. They start the day in fifth, and entertain neighbours Staines Town in a local derby. The Swans seem to be making signing after signing at present, but they aren’t picking up many points- indeed with two draws and eight defeats from their last ten matches they’re in worse form than any other side in the Division.

Waltham Abbey have slipped to seventh, a point outside the top five, but could climb as high as fourth with victory over Chalfont St Peter. The Abbotts have followed some superb form with a spell of inconsistency, winning two and losing three of their last six, whilst the Saints would love a run like that having failed to pick up a win from their last nine matches.

Chipstead start the day in ninth, but are only three points off the top five- and deservedly so, as they are our form team at present, unbeaten since the last day of November. With twenty six points from their last thirty, if they can maintain this form they must have a chance of crashing the end of term party. They host Ashford Town, one of three clubs- Staines and Northwood the others- on thirteen points at the bottom of the Division. The Tangerines have eight defeats from their last ten- four points from thirty- and lost their last two matches, against the Curfews and Ware, by an aggregate of seven goals to nil.

The aforementioned Northwood travel to face Marlow. The Woods have lost their last nine matches, whilst Marlow are unbeaten in five and have only lost two of their last ten. With only twenty six goals conceded the Oak Tree Road side have the second best defensive record in the division, but only the bottom four have scored fewer goals, so it isn’t difficult to see what needs to improve if they are to force their way into the promotion shakeup.

Bedfont Sports host Hertford Town. Sports saw their good run halted by three consecutive defeats, but have bounced back to win their last two, defeating Tooting and Northwood. Town have only one win from their last eight matches but have shown improved form in drawing their last two, against Marlow and Chalfont St Peter.

It seems no time at all since Harlow Town were challenging at the top of the table, but a disastrous run of form has seen them fall to thirteenth. The Hawks have seven points from their last thirty, and travel to South Park desperate to get back to winning ways; whilst the Sparks, who strengthened by adding man mountain striker Melford Simpson on Thursday, come into the match on the back of four consecutive defeats. Match Postponed.

 Suddenly, Hastings look vulnerable. Can the Nuts and Bolts take advantage? Our leaders have lost twice to second place Ashford United- and seen their lead cut to one point. Who will triumph- and can Whitehawk, Cray Valley PM or Herne Bay yet crash the party? It's our South East preview.