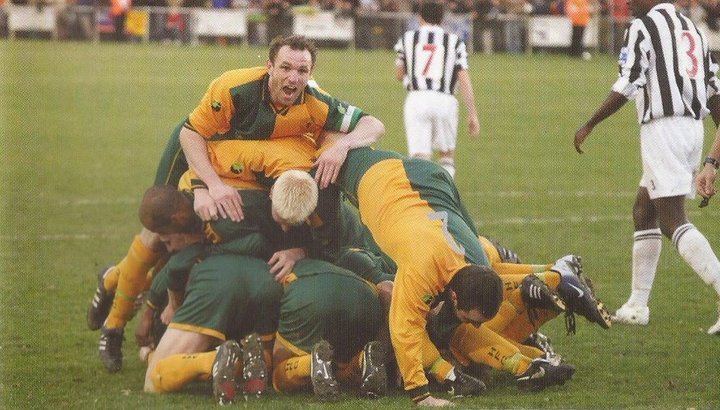 Mark takes us back to a Hornets famous 2007 FA Cup match- but not THAT one!

What would I consider to be the match of my lifetime? Having followed Horsham regularly since 1990, that’s an awful lot of matches to reflect upon, many eminently forgettable if truth be told, but many, many more that will have an everlasting place in my heart. 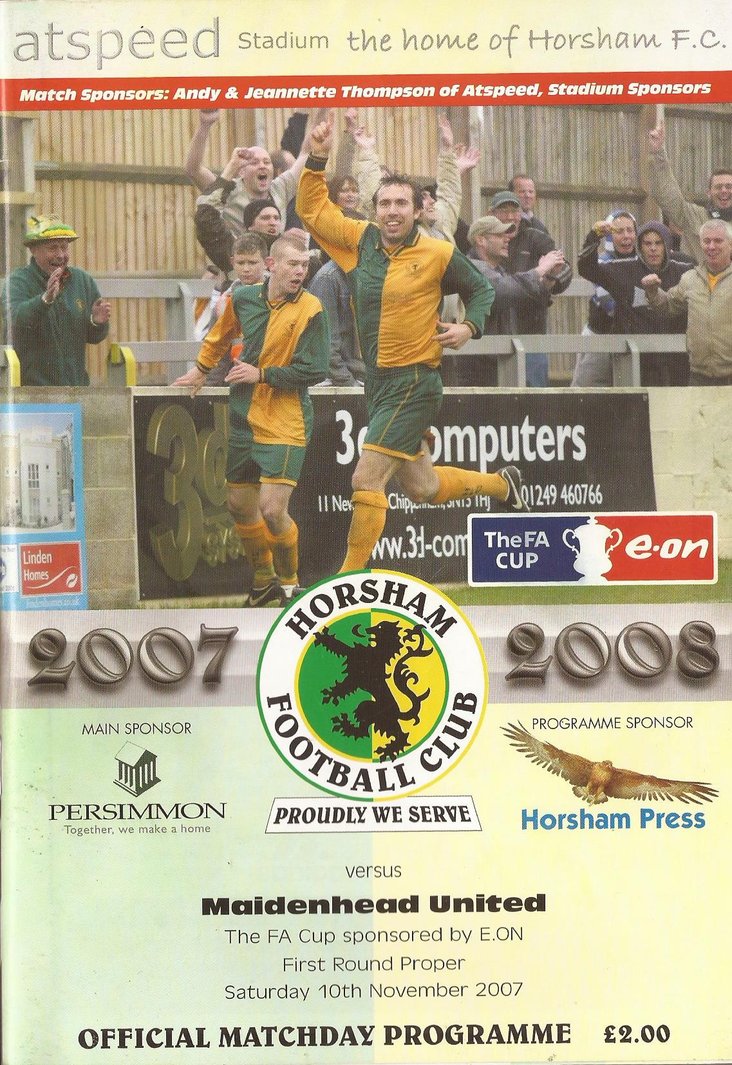 Now you might accuse me of being predictable if I were to tell you that my thoughts leap immediately to that epic FA Cup run of 2007, when the club made it through to the second round for the first and so far only time in our now 139 year history, and those two fantastic televised matches with Swansea City. All very conventional, you might think, but my all-time cherished memory relates to the previous round when our old Queen Street ground was packed to the rafters for the visit of Maidenhead United.

The town was in the grip of cup fever in what was, rather romantically – and heart-breakingly, the final season that football would be played at the Hornets’ home of more than a century. A big crowd was anticipated by most and my rather more modest prediction that ‘we would struggle to get a thousand’ soon proved wildly inaccurate as fans began queuing outside the gates more than three hours before kick-off! By the time proceedings got underway, almost 3,500 were crammed onto the terraces, behind the goal, down at the exposed Cow Shed End and inside the stand where some of the stars of past FA Cup ventures now sat. Owen Parker and Roy Spriggs, members of the 1947 side that shocked Notts County within seconds of the start, and Wilf Hugill and Mick Streeter who played in front of a ground-record 7,134 against Swindon Town in 1966, looked on in anticipation as the latest crop of players put forward their case to be labelled ‘club legends’.

It was all building up to be a wonderful occasion. Even the weather was shining on this early November day and four coachloads of ‘Magpies’ had journeyed down from Berkshire to help provide one of those classic cup tie atmospheres for which the competition had become synonymous, although so sadly less so these days.

Perhaps it was stage fright, maybe it was an inferiority complex in the company of their one-division-higher Conference South opponents, but Horsham struggled to get into their rhythm in the early stages and Maidenhead went close to taking the lead when Yashwa Romeo pounced on defensive uncertainty to fire a shot against goalkeeper Alan Mansfield’s chest and behind for a corner. But slowly the home team grew into the contest and Tom Graves was denied a cheeky goal when his backheel was hastily cleared off the line. But, in truth, the first half was a pretty cagey one in which goalscoring chances really were at a premium.

A half-time stalemate was in the offing as spectators began their move towards the bar or the tea hut. But then, quite literally on the stroke of half-time, the ground erupted. A poorly-taken Horsham corner was cleared up towards halfway and seemingly to safety. But in came Nigel Brake, the full-back taking the ball a few yards before letting fly with a venomous strike that fair flew into the roof of the net, Magpies goalkeeper Louis Wells deserving credit for having seen the ball let alone making a valiant effort to keep it out. “A blooter” drooled Mark Lawrenson on Match of the Day later that night. Yes, Horsham had even made it on to the Beeb’s showcase football show! It was all surreal stuff!

Brake and his fellow defenders stood firm in the face of the Magpies’ second half threat, enabling Horsham to extend their lead just beyond the hour mark with another high quality goal. With a defender hoping to shepherd the ball over the line for a goal-kick, down near the corner flag, striker Carl Rook got a toe in to knock the ball back to Lee Carney, whose square pass was neatly flicked on by Lewis Taylor to Gary Charman. The winger’s effort was blocked by the ‘keeper, sending it ballooning invitingly into the air for Carney to execute the perfect overhead kick for 2-0 and was immediately swamped by his ecstatic team-mates.

Horsham fans were in dreamland but they were quickly jolted out of their euphoria when a foul inside the area gave Dwayne Lee the opportunity to beat Mansfield from the spot and it was ‘game on’ once again. Suddenly, from cautious probing, the match became a real ‘blood and thunder’ affair as both sides went in search of the all-important next goal. Wells denied Charman from a trademark header and Emmanuel Williams dragged one wide for the Magpies before two former Lewes team-mates, Lees Newman and Farrell, were sent on for their respective sides for the final quarter of an hour.

The scene was set for Newman, so often Horsham’s nemesis in the past, to prove himself the party-pooper once again but within minutes of his introduction, the Hornets restored their two-goal advantage. “Horsham, Horsham” rang out around the ground when playmaker Carney played a neat one-two with Taylor and casually waltzed his way inside the Magpies’ penalty box, with shades of Ricky Villa ‘81, before planting the ball over Wells for a truly wonderful goal. Bedlam ensued in the Cow Shed as the shaven-headed wonder set off on his celebratory sprint. Meanwhile, Charman – who had been with his hometown club for more than a decade – threw himself into the arms of his many admirers behind the perimeter fencing and incurred the wrath of Mr Halliday, who promptly booked the talisman for the second time in the match and sent him off the pitch. Such was the level of delirium inside the stadium that it was a good minute or two before some Horsham fans realised their team was down to ten men.

Yet the hosts withstood anything their visitors could throw at them before applying the cherry to the most magnificent cake in stoppage time when Farrell, who had already stolen much of the pre-match headlines through being hearing-impaired, was sent through to unnervingly crash home a fourth goal.

A minute later and it was all over. The obligatory pitch invasion followed as players were embraced, fans danced in front of the stand, and through all the madness the inconspicuous figure of Lee Carney, scorer of two sublime goals, worked his way through the throng with his son perched proudly upon his shoulders. Untroubled by anyone, seemingly without a care in the world. He, and his team-mates, had just put Horsham into the second round of the FA Cup. They were history makers. They were and remain legends!

If you want to read more about the games against Swansea City, then you might be interested in this feature from our 'Football Programmes of Yesteryear' slot.

Tomorrow we'll be heading to Tooting and Mitcham United, courtesy of Roger Butcher. If you'd like to write about the match of your lifetime, please email Ian on townsendaround@gmail.com

 Match of my lifetime: Roger Butcher, Tooting and Mitcham United Roger tells a magnificent story. Only one goal, but along with it came a red card, a terrible injury and collection of tactical genius.