Non League Day- what have we got to offer? 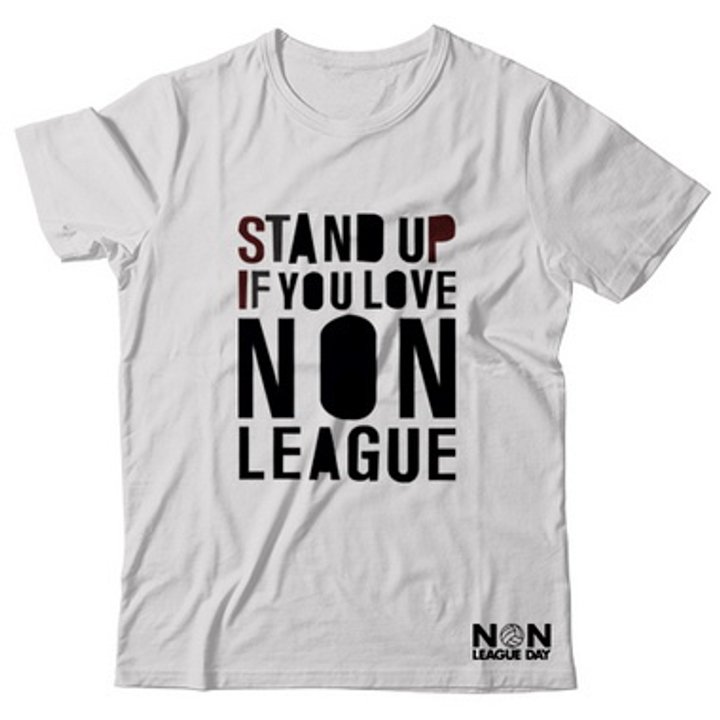 Saturday is perhaps our biggest day of the year- Non League Day. Let’s take a trip around our clubs and see what they have planned.

This weekend marks the tenth annual ‘Non League Day.’ Now for many of us every day is Non League Day, but this is our chance to attract people who perhaps wouldn’t normally watch football at our level; to show them that they don’t need to spend eighty quid on a ticket to have a fabulous Saturday. So get out and grab a Premier League or Championship watching friend, take them along to your club, and see if they might just want to come back of their own accord in the future. Here’s what we have to offer:

We’ve a full programme of Premier Division fixtures. Amongst the highlights we have the following offers:

Bishop’s Stortford v Horsham- holders of Premier Division and Championship season tickets can bring them along and get in FREE. 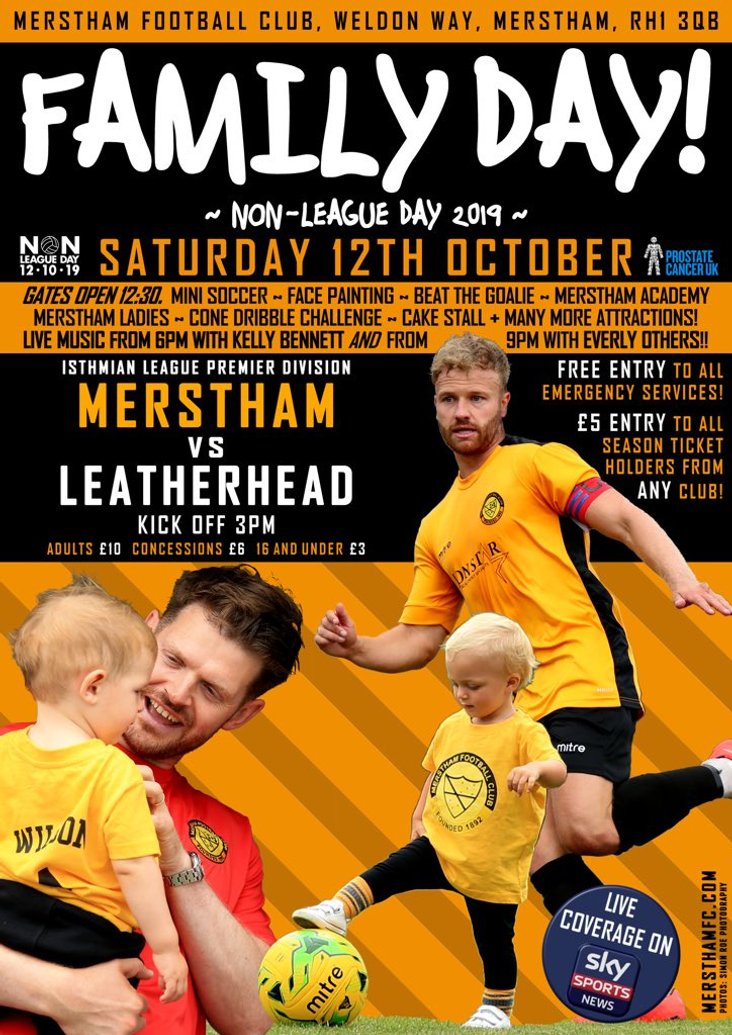 Bognor Regis Town v Potters Bar Town- entry £5 for 999 services and military personnel on production of their ID, all U16s FREE, and Carlsberg £2.50 a pint (as non-drinkers we’ve no idea whether that’s a positive!).

Brightlingsea Regent host Wingate and Finchley, and under 18’s can get in for no money whatsoever. Yes, FREE!

Carshalton Athletic are hosting Kingstonian, and they've given lots of free tickets to four local schools to celebrate, as well as offering half price entry to season ticket holders of any football club National League and above- on the proviso that they enter before 2.15PM.

Cheshunt are having a ‘Pay What You Want’ day- a minimum of £1- and a collection for Prostate Cancer UK as they entertain Worthing. 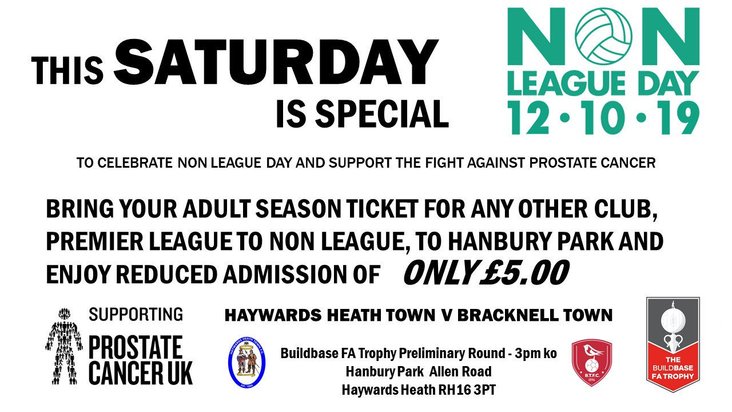 Corinthian-Casuals are hosting Folkestone Invicta, and we’re not sure if they have anything special planned but they are having a big charity auction on Friday night- details on their website- whilst Cray Wanderers will be having a youth day and celebrating all of their sides from Under 8’s to Under 18’s- and hosting a crossbar challenge to raise money for Prostate Cancer UK which will see anyone who manages to hit the bar get a free season ticket.

East Thurrock United host Lewes, and will be announcing a new ground sponsor. They’ve also issued an appeal to their supporters, which you can read on their website. Haringey Borough host Margate, and have reduced admission charges to £5 for adults, and will have a collection for Prostate Cancer UK.

Hornchurch welcome Bowers & Pitsea for an Essex derby, and if you head to their website you can print out a voucher which will give you a third off the normal admission price, so you can get in for a measly eight quid! Finally, Merstham are- as always- pulling out all the stops. They host Leatherhead, and as well as a five-pound entry charge for season ticket holders from ANY club and free entry for emergency services they’ve got so much happening that we’ve included their poster so we don’t have to write it all out!

We’ve one fixture in the South East Division as Three Bridges host Ramsgate- this will be the subject of our matchday feature, so check back here by half five on Saturday afternoon for words and pictures. Hopefully there will be lots of you there as it is a Pay What You Want day, with proceeds going to Prostate Cancer UK. 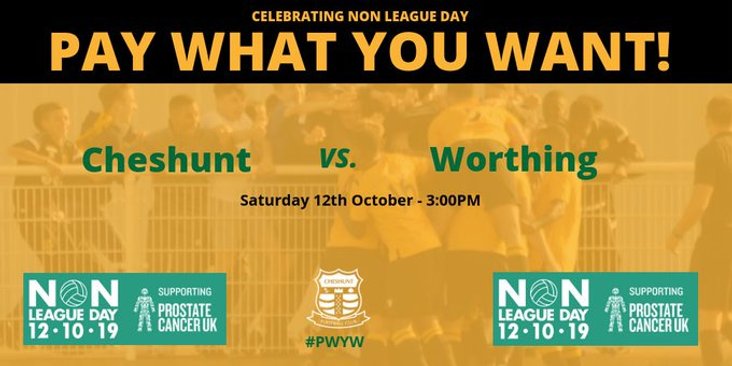 Now we’re off to the FA Trophy. Given this is an FA competition it rather inhibits the initiatives which can be offered, but the fixtures are listed below:

Burgess Hill Town are offering half price admission to their match with Phoenix Sports in aid of Prostate Cancer UK, whilst neighbours Haywards Heath Town will let you in for a fiver with a season ticket from any other football club. Whitehawk are hosting Romford, and celebrating Non League Day by launching ‘Whitehawk Legends’- an opportunity for people over 50 living in the Whitehawk & Bristol Estates to visit the club on match days and share stories – of the club and of the area – before Whitehawk FC home matches, with a tour of the ground, tea and biscuits, meet the players etc. Check the club website for more details.

Hythe Town have announced that they'll have the actual FA Trophy available for you to take a selfie with. It'll be there from 1PM on Saturday and at half time, and they are asking for a minimum donation of £1, money going to Prostate Cancer UK.

We also have a match in the Velocity Trophy. Felixstowe and Walton United are hosting Coggeshall Town (it should have been the other way around, but the game has been moved to the seaside) and offering ‘Pay What You Want’ admission as well as collecting for Prostate Cancer UK.

If your club is doing something that we haven’t mentioned, it’s because we don’t know about it! Get in touch by emailing townsendaround@gmail.com and we’ll add your event to this article.

And you can read all about Non League Day by heading to the official page of the event, which you can find here.