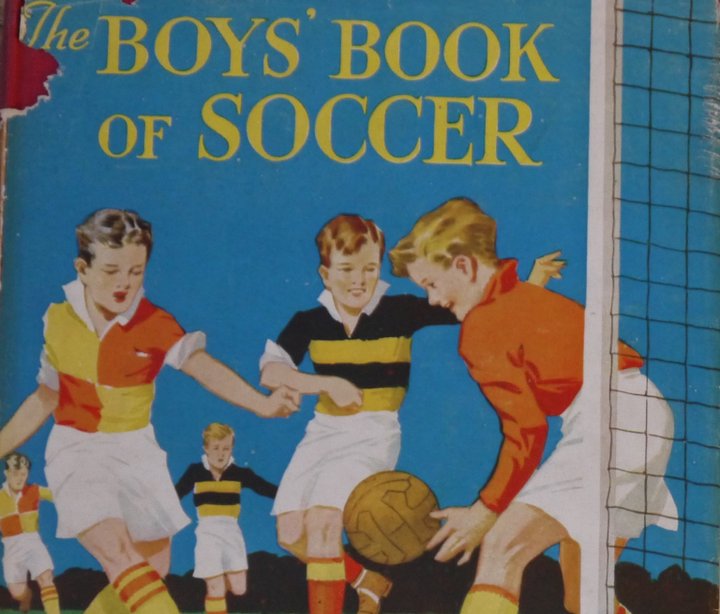 On 20th May this year, just over thirty one thousand people turned out to watch National League Bromley take on Brackley Town in the FA Trophy Final at Wembley. It was Bromley’s first visit to the National Stadium for sixty nine years, and on the previous occasion the attendance had been in excess of 95,000. So what had changed? It’s obvious, isn’t it- the missing sixty four thousand were all Romford supporters!

Coming from the town of Bishop Auckland, home of the side with the record number of FA Amateur Cup wins (ten times, including three in the 1950’s- take that Blyth Spartans!), I’ve always had a keen interest in the competition. That interest piqued, however, when I began writing about the Isthmian League, and found that many of our clubs also had a glorious Amateur Cup history, with a number of victors and finalists. Indeed, the last ever winners of the competition, back in 1974, were Bishop’s Stortford, who defeated Ilford- another Isthmian side- in the final.

Whilst browsing the book section of an antique shop in Lostwithiel, Cornwall, last year, I came across two books which attracted my attention. The first was the Football Year Book of 1949-50, which, alongside thrilling articles such as ‘The Referee and the Spectators by J.M. Wiltshire’ and ‘Centre-Halves I have met by Jackie Milburn’ (having seen much footage of Jackie in his pomp, ‘Centre-Halves I have left on their backsides’ might have been a better title), was a page entitled ‘How Bromley won the Amateur Cup.’ The second was The Boys Book of Soccer for 1950, the cover of which bore the image of five young scallywags in impeccably clean kit enjoying an undoubtedly sporting contest with ne’er a foul challenge nor foul word. 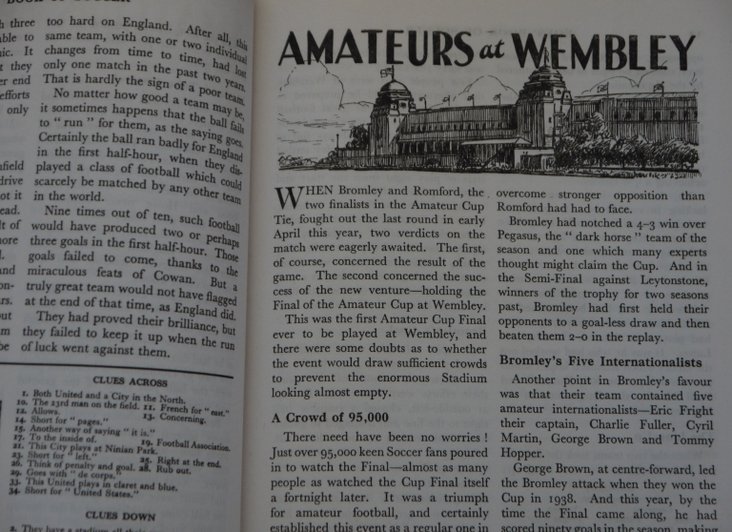 It was this second book which I was particularly taken with. Of course I purchased both, at a ridiculously inflated price (the shopkeeper must have seen me coming), but I’d quickly noticed that, headed by a line drawing of the old Wembley Stadium, towers and all, was an article entitled ‘Amateurs at Wembley.’ No writers credit is given, but the scribe concerned was rather excited by the whole event. He also seemed to have, at the beginning at least, a bit of Bromley bias.

‘This was the first Amateur Cup Final ever to be played at Wembley,’ he explains, ‘and there were some doubts as to whether the event would draw sufficient crowds to prevent the enormous Stadium looking almost empty. There need have been no worries! Just over 95,000 keen Soccer fans poured in to watch the Final- almost as many people as watched the Cup Final itself a fortnight later. It was a triumph for amateur football, and certainly established this event as a regular one in the Wembley programme in future years.’

Bromley, it was explained, had needed to face far tougher opponents than Romford to reach the final. They’d beaten ‘dark horse’ side Pegasus (not sure, given Pegasus was a winged- but white- horse whether this was meant to be amusing), as well as holders and two-time winners Leytonstone (another Isthmian side) in a two-legged Semi-Final. They also had the advantage of fielding five Amateur England Internationals- Eric Fright, Charlie Fuller, Cyril Martin, George Brown and Tommy Hopper. This meant they were ‘less likely to suffer from Wembley stage-fright than their opponents.’

Romford weren’t entirely written off, however. They’d defeated Crook Colliery Welfare- a side who were soon to adopt the name of former folded club Crook Town and go on to bigger and better things- in the Semi-Final, and ‘in goal had the staunch defence of Metropolitan Policeman Reg Ivey, six feet tall and weighing around twelve stone,’ whilst at centre-half ‘they had another six footer, Jack Barton, one of the most persistent pivots in amateur football.’ In these days when many of our footballers are both tall and well-built it may seem strange that height and weight was seen as such a talking point- but there was more. Romford were also ‘trained by Bill Seddon, who in his younger days had played for Arsenal, Grimsby and Luton,’ and were the younger side of the two, ‘in spite of the fact that their outside-left George Patterson, capped six times by Scotland, was forty years old!’

The match patently wasn’t a classic. These were the days before the introduction of substitutes, and Bromley, who went ahead in the nineteenth minute, then suffered two injuries. The players continued- they had little choice- but, to use more modern parlance, this persuaded the Hayes Lane side to ‘park the bus.’ They did this so well that Jose Mourinho would have been proud. Romford attacked, but never quite managed to get a clear sight of goal, wingers Patterson (very nimble for his age, apparently) and Brooks firing wide in the first half- the latter also having a shot cleared off the line- and the Bromley keeper making a number of decent saves in the second half. Bromley held on for the victory, and the author describes it thus:

“Few people who were at Wembley that afternoon would be prepared to say that they saw some great football played; but they did see a great battle and a game that was always full of incident and interest.” 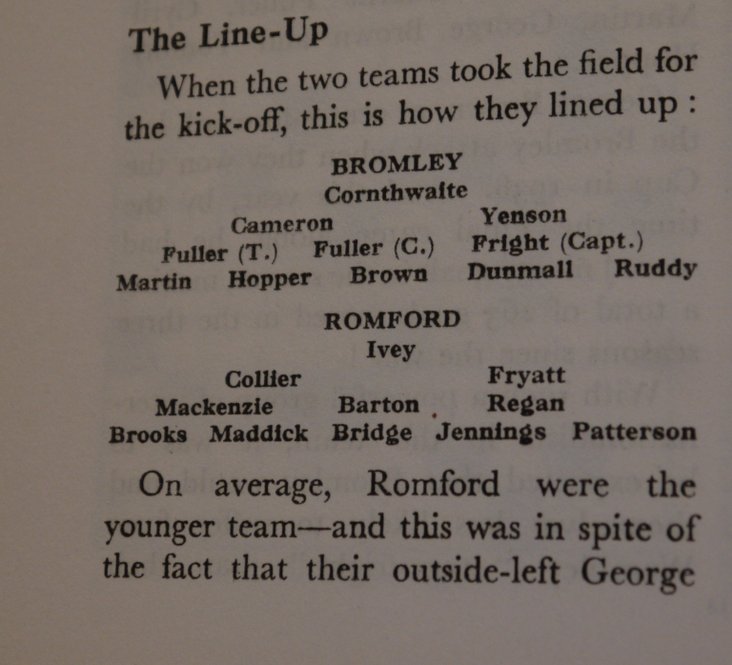 Another fine- albeit less venerable- book, the third volume of John Haley and Terry Felton’s marvellous history of Romford FC, describes the day from a Romford perspective. Hundreds of fans gathered outside Romford Town Hall on the evening after the match demanding to salute their heroes, who had to be persuaded to appear- indeed three of them, crestfallen, had already gone home. The plan had been for a public appearance had they been victorious, but the fans wanted to cheer them despite the result, and in the myopic tradition of football supporters everywhere it was clearly agreed that the best team had lost!

At the time of the match Bromley were members of the old Athenian League- indeed they won a League and Amateur Cup double- but within three seasons had joined Romford as an Isthmian League side. Since then the fortunes of the two have occasionally both been on a similarly upward trajectory, but in the main it has been the side in white who have gone on to bigger and better things.

Perhaps the main reason for that has been stability. Bromley, who finished in ninth place in the National League last season as well as contesting the Wembley final, moved into Hayes Lane in 1938, and are, of course, still there- as well as acting as Cray Wanderers landlords whilst Wands try and try again to get a place of their own. During the same period Romford have had to sell their ground, folded, been resurrected, and have since played at Hornchurch, Rush Green, Colliers Row, Aveley, Thurrock and now East Thurrock United. Whilst Bromley were competing at Wembley at the end of their season, Romford required a last day victory to salvage their Bostik League future- and the folding of Thurrock meant they had to find a new home once more.

This season has been more positive for The Boro. In sixth place in the North Division, with only one defeat so far, and with a cup tie against highly-fancied Kettering Town to come on Sunday, Romford look stronger than at any time this decade. That said, if they are to match Bromley’s recent revisit to the national theatre of dreams, you have to think that the first thing they need is not success on the field, but a home of their own. 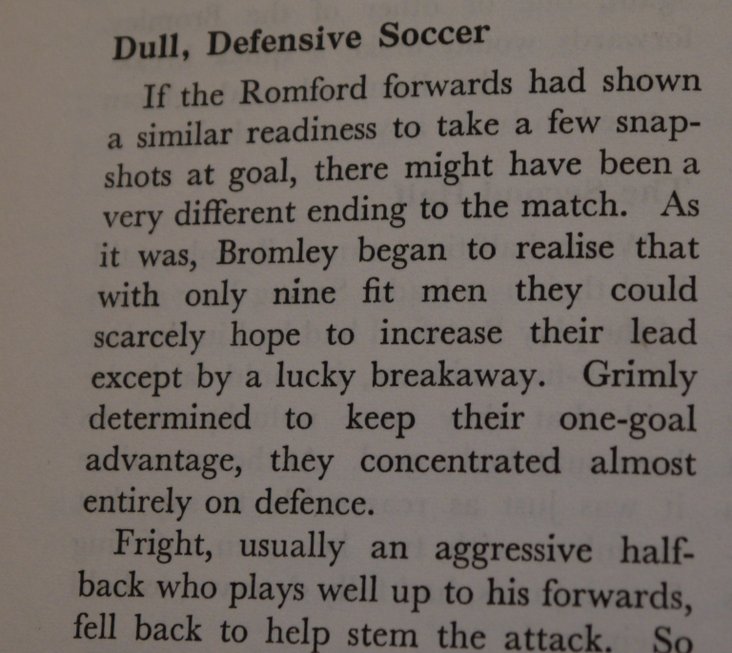 Hopefully the tireless work of their board and volunteers may mean that they have their own theatre of dreams before too long. 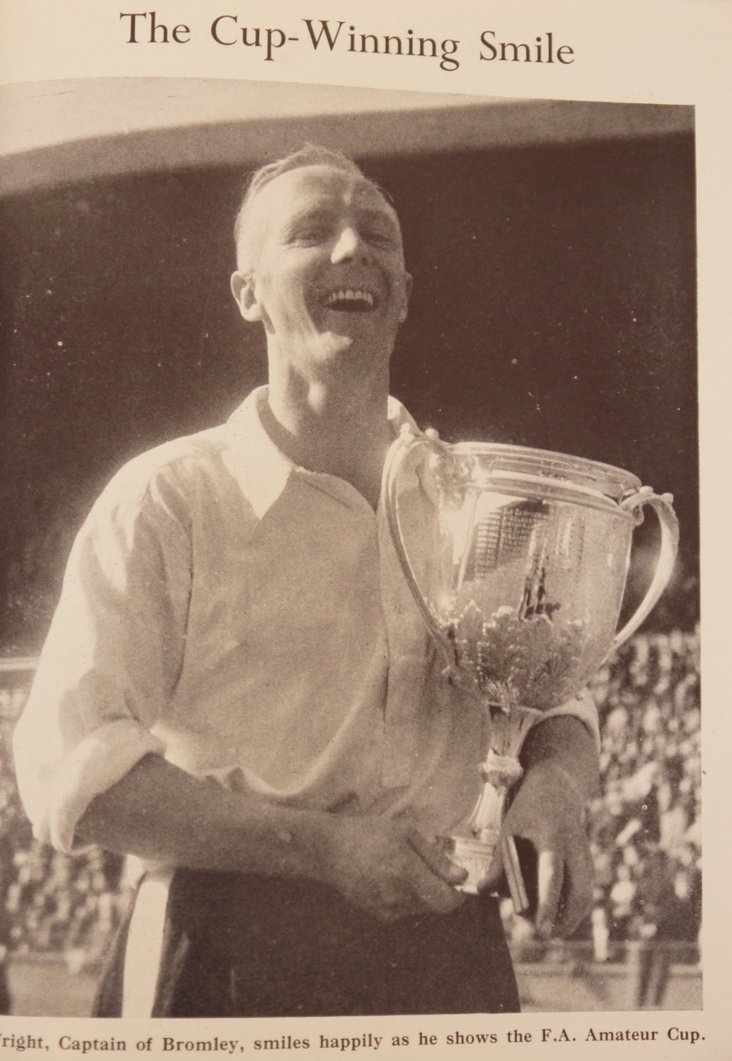 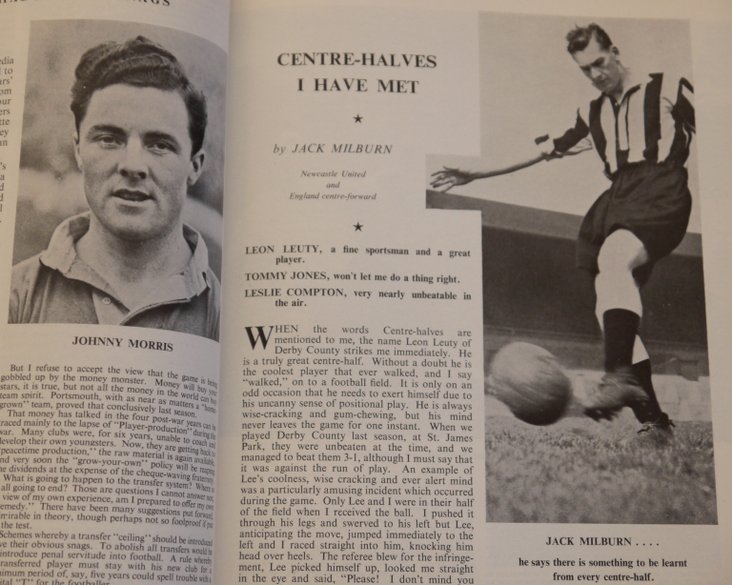 'Centre-halves I have met.'

 Rocks make the Belmont a hard place for Whitstable, whilst Hanwell, Egham and Hastings kill giants! Our round up of the FA Cup First Qualifying Round

Zaki is...backi!  Tanners announce three new arrivals, two of whom will be rather familiar