Tanners hit back to stun Stones 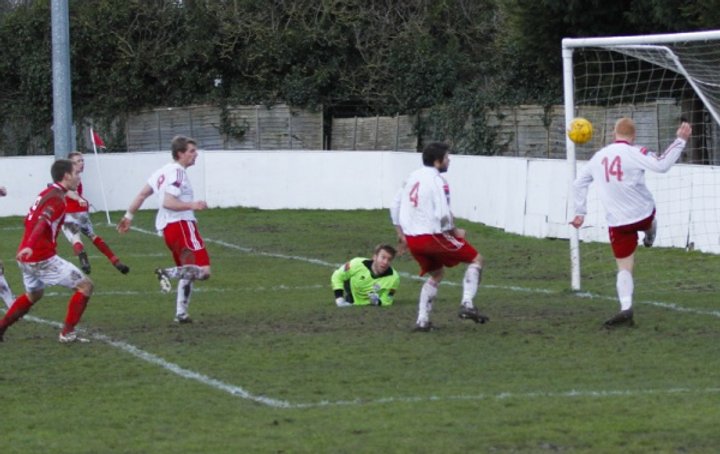 ANOTHER excellent crowd of 1,801 watched the big game in Ryman South yesterday (Saturday) and most of them left disappointed as third-placed Leatherhead came from behind to win 3-2, becoming the first side in the league to chalk up ten away victories.

Alex Brown’s 34th-minute strike for Stones was wiped out by Matt Smart moments before the interval. Stuart King restored the home lead with his 19th league goal of the season on the hour but to no avail.

Tom Bradbrook made it 2-2 in the 79th minute and Neil Jenkins claimed Tanners’ winner with five minutes left as they moved to within five points of the leaders with a game in hand.

Dulwich are three points behind Stones with two matches in hand after their game at Horsham was called off, the division’s only weather casualty.

Faversham strengthened their grip on fourth place, a point behind Leatherhead, with a hard-fought 2-1 success at Walton Casuals.

Jamie Maxted’s header gave the visitors a 21st-minute lead but recent signing Mu Maan equalised four minutes before the break, his third goal in as many games.

Casuals made a brave effort to pull off their first home win of the season but it was not to be and Luke Harvey’s tap-in five minutes from time provided the Kent’s side’s ninth away victory.

Sittingbourne held on to fifth place despite going down 2-1 at Worthing in a strange affair. It was goalless after 26 minutes yet the final score was on the board before the half-hour.

Billy Medlock converted a penalty for Rebels and crossed for Scott Kirkwood to make it 2-0 before Joe Taylor rifled home a 25-yard reply.

Crawley Down missed the chance to overtake the Brickies when they were held to a 0-0 draw at Whitstable. The visitors had Jack Page sent off with 20 minutes to go but held out thanks to Tom Graves, who cleared a Scott Heard effort off the line.

Ramsgate are also a point behind Sittingbourne after maintaining their good recent form with a 1-0 home win over Chipstead. In a game of few chances, Tom Chapman hit the decider after 73 minutes.

Folkestone are a point further back after netting five unanswered goals at Tooting, whose keeper Darren Behcet was sent off in the 21st minute for bringing down Richard Atkins.

Phil Stevenson converted the resulting penalty and Frankie Chappell’s header doubled the lead just after half-time. Dane Luchford and a Ryan Adams own goal doubled it again before the excellent Atkins deservedly completed the scoring with a couple of minutes to go.

Hythe’s promotion hopes faded further as a Ross Treleaven hat-trick sent them spinning to a 4-2 home defeat by Eastbourne. He opened the scoring midway through the first half and set up a goal for Matt Aldred shortly afterwards.

Dave Cook pulled one back five minutes before the break, his 19th league goal, but Hythe could not avert a fourth successive defeat. Treleaven struck again four minutes after the interval and completed his treble midway through the half, soon after Ronnie Dolan had again reduced the arrears.

Herne Bay continued their revival after a bad patch with a 4-2 victory at Merstham, who took a ninth-minute lead through Joe Holland only for Tunji Agbajae to replay within a minute.

Dean Grant and Tommy Bryant made it 3-1 by the 32nd minute and, although Fabio Saraiva hit back with a volley early in the second half, Billy Bennett clinched the points in the 73rd minute.

Bottom club Three Bridges held out for a 0-0 home draw with Burgess Hill despite playing with ten men for more than an hour after Dean Carden's dismissal.

A poor game at Corinthian-Casuals produced a 1-0 victory for Walton & Hersham thanks to a Graeme Purdy goal just before half-time. The Swans held their lead despite having Adriano Moraes dismissed.

That made it six away wins in the division while only two home clubs took maximum points, with the overall season’s tally now 95-120 in favour of visiting clubs.