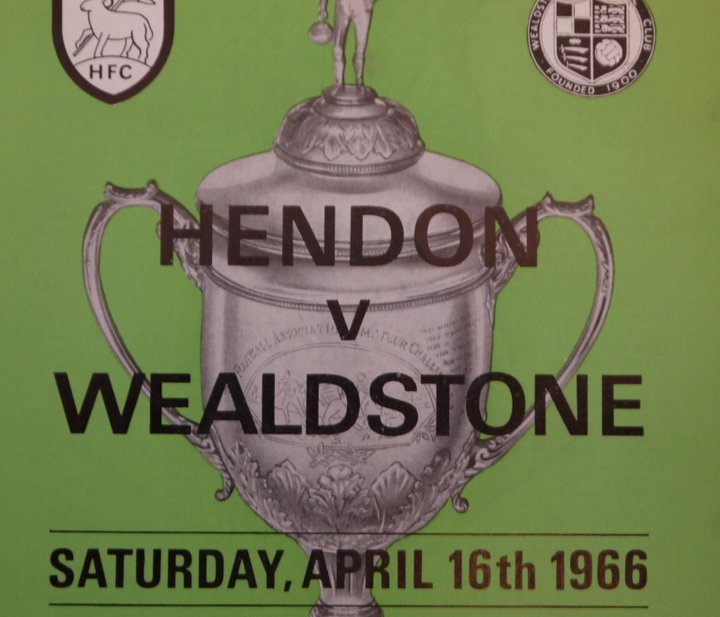 In the second of a series looking at the history of the Isthmian League, we head back to 1965-66, when Hendon were trying to win a League and Amateur Cup double for the second season in a row.

The 1965-66 season had something special at the end of it- the very first World Cup to be held in England, due to kick off at Wembley Stadium on 11th July 1966 as the hosts entertained Uruguay. You can see a full page fixture list for the tournament, taken from the FA Amateur Cup Final programme, below. But in August 1965 that seemed an awful long way away, and for our clubs there were a number of far more important things to worry about. Could Hendon, who had taken the 64-65 title in a Champion Hill Playoff against Enfield after both teams had tied on sixty three points, hold onto their crown? Or would Enfield, or one of the other sides in the top four, Leytonstone or Kingstonian, take their title?

Away from the Isthmian League, Manchester United started the new season as League Champions, whilst Liverpool had won the FA Cup. The FA Amateur Cup had seen Hendon do the double, defeating Whitby Town in the Final in front of forty five thousand people. 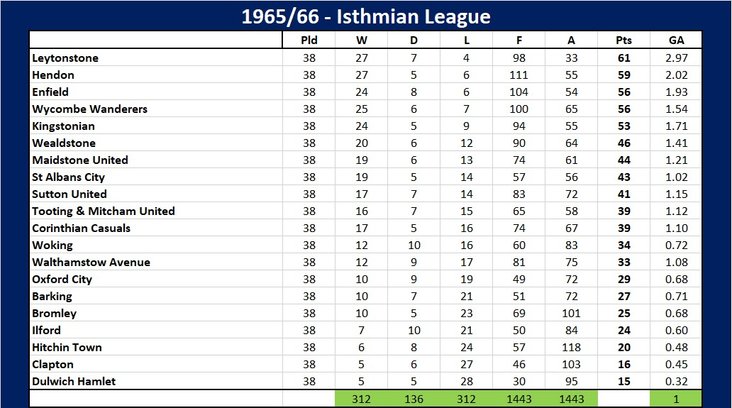 The opening day was August 21st, and the results were as follows:

Hendon, as you can see, started the season in similar fashion to the way they'd finished the previous one. Their eight-three win at Clapton was to prove their biggest of the campaign. They ended the season with fifty nine points, four fewer than in the previous year, and were the biggest scorers in the League with one hundred and eleven goals from their thirty eight games- but it wasn’t to be enough. Leytonstone won the same number of matches as the Greens, but they lost two fewer, and took the title by two points- the eighth time they were to lift the trophy, but sadly the last time, too.

Perhaps the key match of the season came on November 2nd, when Leytonstone welcomed Hendon and defeated them by three goals to one. The return fixture, on May 3rd, was a nil-nil draw- the only goalless draw that the Greens participated in all season. 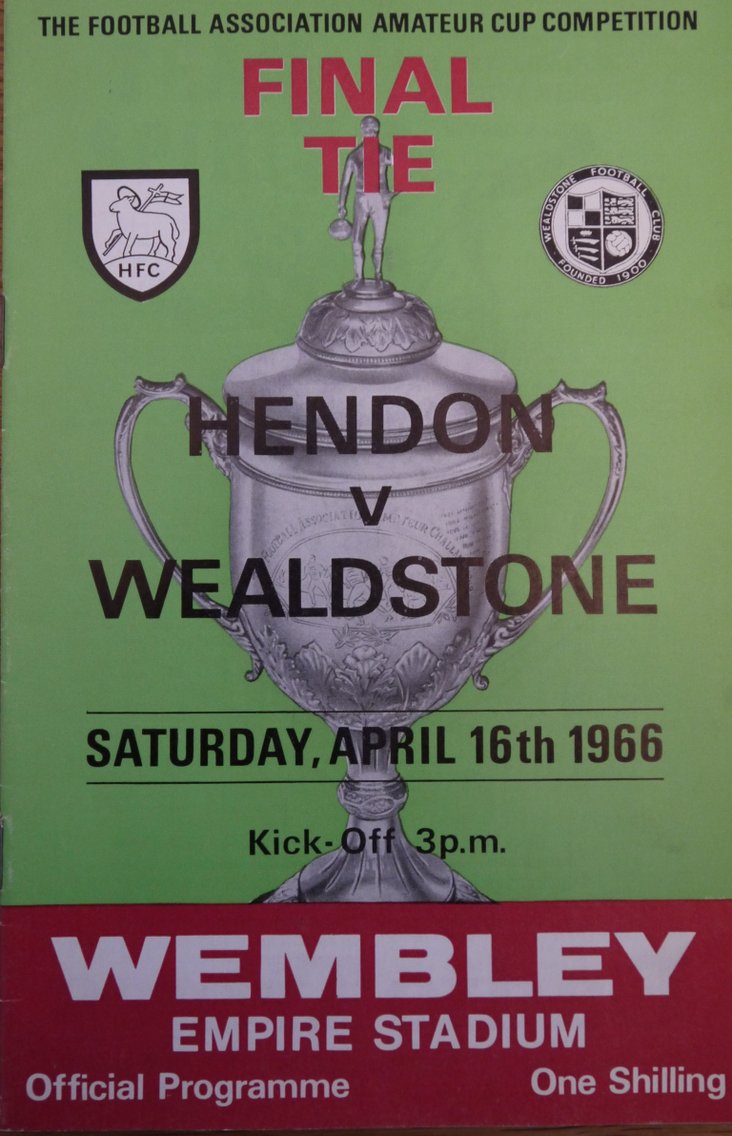 Most goals in a match: 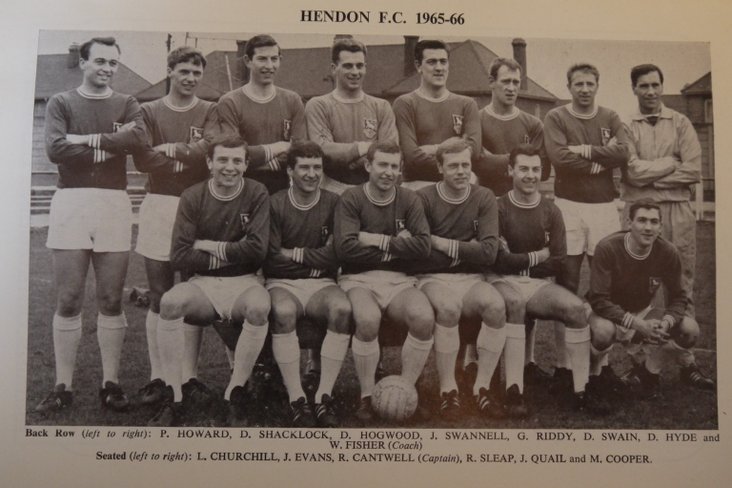 We don’t have attendance figures for most of the matches, sadly- but the highest we have is the five thousand eight hundred who watched Wycombe Wanderers take on Leytonstone. That match, on April 8th, finished honours even as a one-one draw.

It wasn’t the best of years for our clubs in the FA Cup. Hendon got to the First Round, played on 13th November, but departed on the wrong end of a four-one thumping at Grantham; whilst Leytonstone were losing one-nil at home to Hereford United. Wealdstone went down three-one at Millwall, whilst Wycombe Wanderers drew two-two at Guildford City before losing the replay 1-0 four days later.

Corinthian-Casuals were hammered five-one at home by Watford. 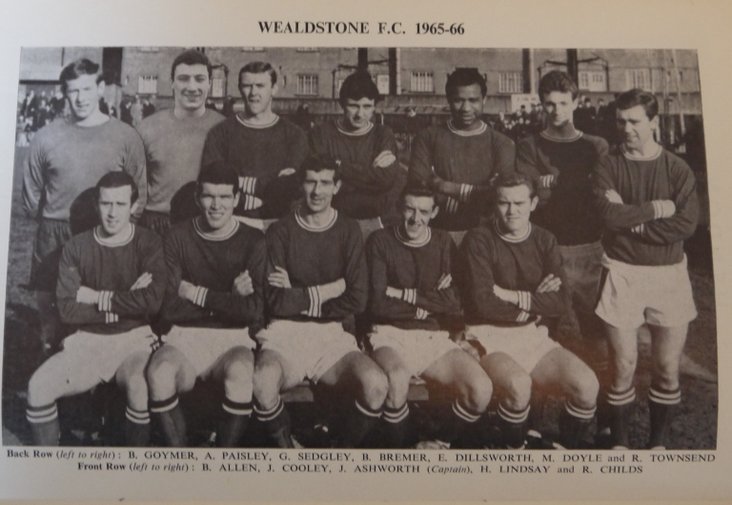 The FA Amateur Cup was once again a happy hunting ground for Isthmian League sides, with four of them making it through to the last eight of the competition.

Two of them were drawn together. Hendon and Wycombe Wanderers, both still firmly in the fight for the league title, slogged it out for a Semi-Final place at Claremont Road, and the holders came out on top, two-one winners. Wealdstone hosted Leatherhead and also came away with a two-one win, whilst Sutton United had the long trip to Whitley Bay on the North East coast. Whether United’s players visited the Spanish City funfair before the match is not recorded, but they departed the competition, Bay winning two-nil.

The Semi-Finals saw Wealdstone drawn against Alvechurch, and Hendon becoming the next side to take a long trip on the London and North East Railway (or up the A1, if you prefer), as they travelled to take on Whitley Bay. The Wealdstone match was played at Chelsea’s Stamford Bridge, and Alvechurch perhaps had only themselves to blame for their subsequent defeat, missing a penalty and then seeing their goalkeeper punch the ball into his own net for the only goal of the game. Hendon had to brave the cold North Sea winds of Sunderland’s Roker Park, and after a fabulous performance from their keeper John Swannell reached the Final for the second year in succession due to goals from Geoff Riddy and Roy Sleap. Bay got one back from the spot, but it wasn’t to be enough for the North-East side. 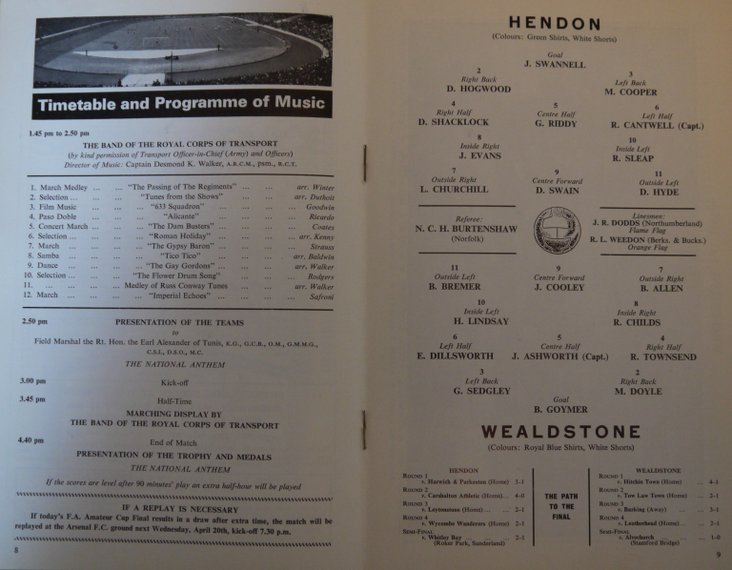 The Cup Final line up

The Final took place on April 16th 1966, in front of forty five thousand spectators at Wembley Stadium. A local derby at a local stadium, perhaps! Hendon were in the Final for the fourth time, having won two and lost one of the previous three, whilst this was Wealdstone’s second trip to play beneath the twin towers- although the previous one had been in the Middlesex Red Cross Cup!

Hendon lined up as follows:

John Swannell- goalkeeper- a transport manager and also England’s Number One.
David Hogwood- right back- a telephone engineer who had previously played for Wembley,
Mickey Cooper- left back- a contracts engineer, only nineteen years old.
David Shacklock- right half- a book salesman who previously played for Cheshunt and Enfield.
Geoff Riddy- centre-half- a foreman printer facing his former club. and a Water Board Inspector, who had played for the FA XI and had previously played for Wokingham and Maidenhead United.
Bobby Cantwell- left half- played Amateur football for Arsenal, QPR and Leyton Orient, making his fourth appearance in the Final, his second for Hendon.
Laurie Churchill- outside right-an apprentice printer who had already scored thirty six goals this season.
John Evans- inside right-a PE Master at Dulwich School and a Welsh International.
David Swain- centre forward previously with Tooting and Mitcham United.
Roy Sleap- inside left- starting his third final, previously played for Barnet and Enfield.
David Hyde- outside left- a former West Ham United Youth who had played for Woodford, Tooting & Mitcham United and Enfield.

Wealdstone lined up as follows: 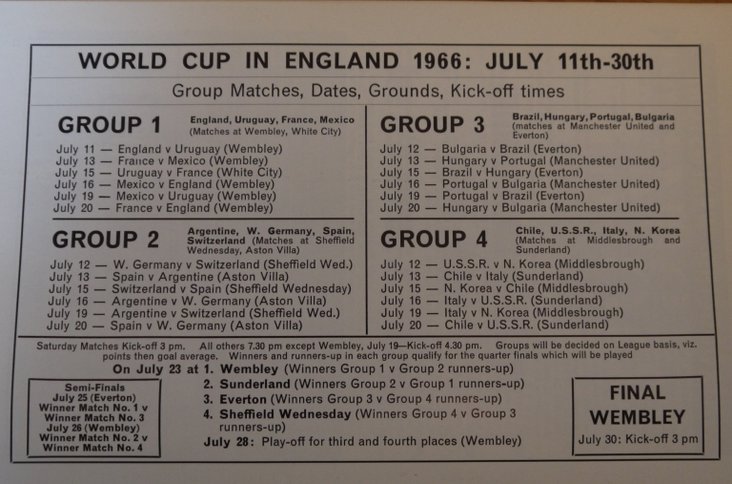 Brian Goymer- goalkeeper- a Merchant Banker previously with Barnet and Enfield.
Micky Doyle- right back- an electrical draughtsman who previously played for Fulham.
Gordon Sedgley- left back- a transport service manager in his first season with the club after moving from Enfield. .
Charlie Townsend-right half- a carpenter who came in from Watford Juniors ten years previously and had also played for England.
John Ashworth- centre half and captain. A Sales Administrator who had previously played for Kingstonian, and also had England caps.
Eddie Dillsworth- left half- celebrating his twentieth birthday, a despatch manager who joined the club from Fulham.
Brian Allen- outside right- A toolmaker who joined the club from Cheshunt and previously played for St Albans City, Barnet and Dartford.
Bobby Childs- inside right- Another toolmaker and a former Brentford and Enfield man.
Jim Cooley- centre forward- Moved over to Wealdstone from Finchley, previously played for Harrow Town.
Hugh Lindsay- inside left- An England and Great Britain Olympic forward, who once played for Kingstonian. A Schoolmaster.
Bernie Bremer- outside left- a market researcher who had struggled with injury.

The sides had met in the League on Christmas Day, when Hendon had swept their opponents aside by five goals to two, and on January 29th, when Hendon, this time in the role of visitors, had again triumphed by three goals to two. It was obvious, then, who the favourites were- and they took the lead after only four minutes, Geoff Riddy with the goal. Wealdstone weren’t downhearted, however, and equalised just before the break through Bobby Childs, and the two sides couldn’t be separated until there were only three minutes left on the clock, Bremer sending the Wealdstone fans into paroxysms of delight. Childs then got his second just before full time to wrap up a three-one win for the Stones.

Check out our Isthmian Archive site, here- that's where we got the table and much of the other information from.

 Flashback! Whyteleafe v Erith Town, FA Cup, August 2017 Given we have no football to watch at present, we're revisiting features from previous seasons. This one takes us back to August 2017, and was originally entitled 'Stuck in the middle with Amoo.'