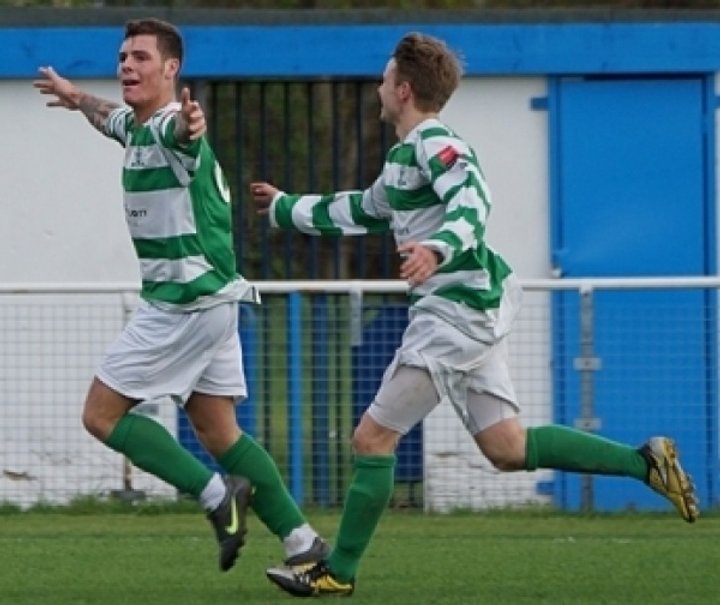 Thanks to a fixture backlog, the Abbots had already played on Monday, Wednesday and Thursday, winning twice, and they took the lead at Grays on the half-hour when James Peagram notched his 20th league goal.

Dean Green made it 2-0 before half-time and struck again 12 minutes after the interval. Then, it seemed, the visitors finally ran out of steam. Joao Carlos opened Grays’ account in the 72nd minute and within eight minutes it was 3-3 as Danny Bunce and Junior Baker found the net.

It looked as if Grays would go on to complete the comeback and chalk up their 19th win, but the Abbotts dug deep and Green completed his hat-trick in the 85th minute before Joe Pearman rounded it off. (Abbey celebration pictured by Mikey Cartwright).

Grays had to be content with 102 points, 13 more than anyone else in the league, and a 13-point winning margin after they had been 16 points behind Maldon in December.

Runners-up Maldon finished with a 2-2 draw at Wroxham. They trailed to goals by Ross Durrant and Ben Thompson at half-time but gave themselves a chance with a header by Ollie Berquez ten minutes after the break, their 100th league goal.

It was Berquez who made the most of a defensive error to equalise in the 85th minute and at that stage Maldon were the league’s top scorers.

Third-placed Thamesmead go into the play-offs in good form after a 4-0 victory at Harlow. Richard Stevens netted a hat-trick with goals in the 27th, 44th and 66th minutes, and an own goal completed the scoring before Harlow had Kevin Toonga sent off and then missed a penalty.

Witham will visit Thamesmead in Tuesday’s semi-final after holding on to fourth place with a 2-2 draw at Potters Bar.

The Scholars took the lead in each half through Chris Doyle and James Gershfield, but Witham replied through Brad Stopher and, with 13 minutes left, James Stevens.

It was almost Aveley who had a short trip across the river to Thamesmead. They led 3-2 at Soham going into added time and that would have given them fourth place. But Buster Harradine converted his second penalty of the afternoon in the 91st minute and Millers finish fifth, thus going to Maldon on Tuesday.

Alex Read put Millers ahead after 14 minutes but Robbie Mason’s header, his 27th league goal, squared it on the half-hour and Harradine’s first penalty gave Soham the lead just before the break.

Read replied in the 57th minute, taking his league tally to 25, and Sheldon Sellears put Aveley in front with 20 minutes to go, only for Harradine to foil them with his 20th of the season.

The other issue to be decided was at the bottom, where Ilford needed to win at Tilbury and overcome a nine-goal deficit to avoid relegation and send Redbridge down.

Redbridge have suffered some heavy home defeats this season but their recent form has been much improved and they ensured survival by seeing off visiting Sudbury with a lone goal by Nana Asamoah midway through the second half. They climbed above Harlow to finish 20th.

Ilford took the lead eight minutes before half-time through Chinedu McKenzie. Tilbury drew level with a penalty by Aaron Waters after a foul on Rimmel Daniel in the 71st minute but McKenzie immediately restored Ilford’s lead.

Aaron Matthews made it 2-2 with eight minutes left and Ilford’s stay in the league ended on a suitably low note when Waters scored direct from a last-minute corner to give Dockers a 3-2 victory.

Heybridge have had a bitterly disappointing end to the season after looking certain play-off qualifiers for most of it. And it looked as if it would finish badly as second-half goals from Spencer Knight and Jordan Gill left them trailing 2-0 at home to Ware.

They had even lost their position as the league’s top scorers to local rivals Maldon. But they salvaged that consolation honour, and a 2-2 draw, with goals in the last three minutes from Reece Morgan and Ben Newson which took their tally to 102.

Swifts also have the division’s golden boot winner, and the league’s overall top scorer, in 33-goal Luke Callander. Newson’s goal was his 20th in the league and, with Michael Cheek on 21, they are the only club boasting three 20-goal men - none of which will be much compensation for finishing sixth, five points away from a play-off spot.

Romford did well to claim eighth place on a limited budget, making sure with a 3-1 victory at Brentwood. Nick Reynolds put them ahead in the 58th minute and Kurt Smith made it 2-0 with seven minutes of normal time left. Connor Hogan pulled one back in the 90th minute but Ben Jones secured the points well into added time.

Needham Market finished the season with only four home wins, which came in successive home games during February and March, after a 2-2 draw with Cheshunt. Victor Igo and Corey Whitely put the visitors 2-0 up before Kieron Leabon pulled one back just before half-time. Sam Newson equalised in the 72nd minute.

There were no goals at Waltham Forest, where Chatham’s Austin Gacheru came closest to breaking the deadlock with an early effort that hit the bar.

 Dulwich have that X-factor IT WAS a nailbiting afternoon yesterday (Saturday) at Champion Hill – but Dulwich had the X-factor in Xavier Vidal, whose goal earned them the point they needed to clinch the Ryman South title.