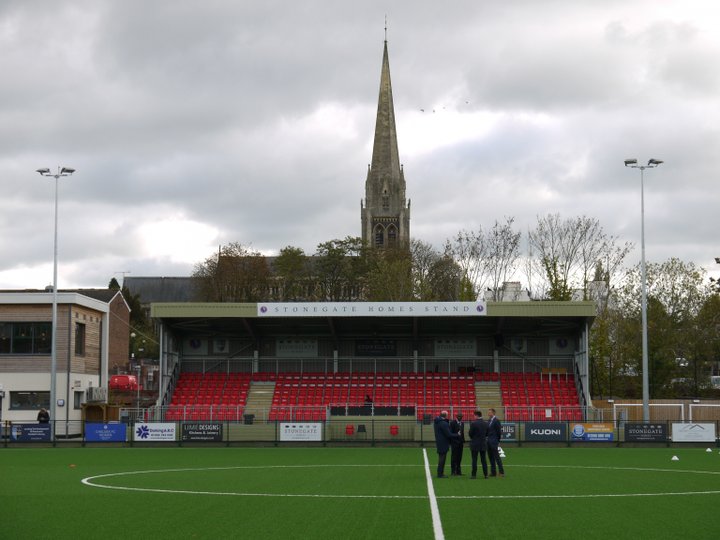 It’s our round up of FA Trophy and League action

Winter is coming! Well it certainly felt like it yesterday, but some of our clubs were red hot both in the League and FA Trophy. We’ll start our round up with the knock out competition.

AFC Hornchurch had been suffering from a bit of a blip recently, with three straight league defeats, but they put this right in the cup in some style yesterday. South East Division Ramsgate were the visitors, and although the Rams were in good form, unbeaten in three and having lost only one of their last five, the Urchins put them to the sword, running up six goals without reply. Five of them came in the first half- indeed, the four came in the first nineteen minutes. Nana Boakye-Yiadom and Sean Marks each got two, with Jordan Clark and George Purcell also finding the net.

Folkestone Invicta have been in terrible form of late, with only one win and six defeats from their last seven. Yesterday, however, it all went right, two from Johan Ter Horst and another two from Adam Yusuff sandwiching a Kane Rowland effort to make it five-nil. Leatherhead eventually got a goal back through Sean Okojie, but that was their only consolation.

Leatherhead’s FA Cup conquerors Hitchin Town were hosting Hayes & Yeading United, but after their midweek joy had nothing to sing about yesterday as a goal from Lee Barney saw United dump them out of the competition at Top Field. Horsham also slayed a giant, in this case Corinthian-Casuals, and they did it in some style, Joe Shelley, Rob O’Toole and Jack Brivio finding the net in a 3-0 victory. That’s the third successive match in which the Hornets have scored three.

Lewes continued their good form and even travelled to the correct Ashford, club secretary Barry Collins setting up roadblocks to ensure that nobody inadvertently went to United instead of Town (actually, given the railways in Sussex have constant engineering work these days, it’s a wonder that anyone gets anywhere). The Tangerines took the lead in the first half through Adam Baigent, but the Rooks hit back in the second half, Omarr Lawson and Declan Appau finding the net- so for once Lewes won’t have a midweek cup replay to look forward to.

Tom Richardson scored for the tenth time this season as Aveley defeated Dunstable Town 1-0 at Parkside, whilst we saw our first draw at Larges Lane- but it was so nearly a giant killing! Bracknell Town were two-one up- Liam Ferdinand and James McClurg/ Jimmy Muitt- as their match against Premier Division Bognor Regis Town entered the dying embers, but up popped Bradley Lethbridge to send it back to West Sussex for another go in midweek.

At the Brentwood Arena Town were losing to Whitstable Town as the match entered the final eight minutes, Ricky Freeman having given the away side an early lead from the spot. But then the blues produced three goals in five crazy minutes, Kojo Apenteng, Charlee Hughes and Mitchel Hunter finding the net to seal an impressive victory.

Chipstead continued their good form with a 2-1 win over Berkhampsted Town, Sam Clayton and Oliver Thornton with their goals, whilst in our #bostikmatchday feature Dorking Wanderers were made to work hard by Sevenoaks Town- and you can read about that in detail HERE.

Haringey Borough took an early lead against Chesham United, Lionel Stone with the goal in the fifth minute, but a second half equaliser means they have yet another cup tie to schedule, whilst on the Kent coast Herne Bay won the South East/North battle, defeating Witham Town 2-1. Bradley Schafer and Connor Wilkins struck for Bay, Alejandro Seonne-Barber for Town.

Just down the road in Hythe, Town were entertaining Bishop’s Stortford. Jamie Cureton got his tenth of the campaign to give the away side the lead, Alfie Mason added another, and although Town were able to reply through Nigel Neita it wasn’t enough. Kingstonian got a 1-1 draw with Bedford Town, both goals coming in added time with Elliott Buchanan giving K’s the lead, whilst Enfield Town continued their impressive form with a 1-0 win at Lowestoft Town, Liam Hope finding the net in the 89th minute.

Maldon and Tiptree sadly lost 3-0 at home to Royston Town, but there was better news for Potters Bar Town- although sadly they were knocking out Premier Division rivals Margate at Hartsdown Park. All of the goals came in the first half, a Bradley Sach double for the Scholars and a Joe Taylor goal for Gate, the match finishing 1-2.

Merstham left it late to defeat South East Grinstead Town, Jake Hutchings and Kershaney Samuels scoring in the last quarter of an hour, whilst Carshalton Athletic came back from two down to draw at Met Police, Jordan Cheadle and Omar Koroma with their goals. Greenwich Borough went to Mildenhall Town, and this match went to extra time before Borough triumphed 4-2. A Solomon Taiwo double gave the away side a first half lead, but James Seymour and Tom Boxer levelled things in the second half. Laurent Mendy and Ryan King-Elliot sent Borough on the long trek back to South East London with a smile on their faces with goals in the first period of extra time.

Molesey fell 1-0 at home to Walton Casuals, whilst a double for Reece Beckles-Richards gave Wingate & Finchley a 2-1 win at South East Division Sittingbourne, for whom Dan Parkinson had earlier got an equaliser.

Tonbridge Angels had to produce a late, late show to defeat Whyteleafe at Longmead- and they had to do it with ten men, after Sonny Miles was sent off early on. Leafe initially took advantage, Dan Hector giving them a half time lead, and they held it until nine minutes from time when Alex Read equalised after Matthew O’Donoghue had evened up the personnel by getting his marching orders, too. Joe Turner than scored a last-gasp spot kick before Harrison Carnegie joined O’Donoghue in the dressing room shortly before the rest of his team mates.

VCD Athletic fell 3-1 at home to Leiston, Ali Fuseini with their goal, whilst in the battle of the poorly performing Hawks at the Enclosed Ground- both sides have been making their fans miserable of late- it was the Hawks of Harlow who emerged triumphant, second half goals from Tom Hitchcock, Nathan Koranteng and Emile Aqcuah turning round a first half deficit (Anesu Sismayi) and holding off a late Whitehawk comeback (Ed Sanders) to give Town a 3-2 victory.

Five matches in the North Division produced eighteen goals yesterday. The lowest scorers of all of our victors were Bowers and Pitsea, but they will care not one jot as they moved up to second place with a 2-0 defeat of Romford. Quentin Monville- just before half time- and Lewis Manor- just after it- did the damage. Romford are now eleventh.

Heybridge Swifts continued their magnificent form under Julian Dicks, making it four wins in four matches with a 4-2 win over Felixstowe and Walton United. A double from Harrison Chatting, sandwiching efforts from Dan Walker and Matt Price- put them four-nil up, with Jack Ainsley and Miles Powell in the last ten minutes making it more respectable for the Seasiders. Swifts are fourth, their opponents thirteenth.

Bury Town have climbed the table rather rapidly of late and now sit fifth, after three second half goals from Jake Chambers-Shaw, Ryan Jolland and Ollie Hughes gave them victory over Tilbury (18th), whilst Coggeshall Town are sixth- Sam Bantick, Ross Wall, Jamie Shaw and Connor Hubble all finding the net as they defeated Grays Athletic 4-0. Grays are down to seventh.

Barking are up to ninth, and they defeated twelfth place Great Wakering Rovers 3-0 away from home yesterday. Ben O’Brien, Daniel Cheema and Eusebio De Silva got the goals.

Waltham Abbey went back to the top of the table with a hard-fought 1-0 win at Egham Town, Ibrahim Kehinde with the goal. Yet to draw a match, that’s the Abbotts eighth win from ten games.

Marlow climbed to fifth, Devontae Romeo scoring the only goal of the game early on at Bedfont Sports, whilst Tooting & Mitcham United continued their recent good run with their third straight victory, an own goal and a Danny Bassett effort- his fifth in those three matches- moving the Terrors up to seventh. Gareth Chendlik had equalised for Hanwell Town, but it wasn’t enough to get them a point.

There was only one match in the South East Division, and Guernsey found that Haywards Heath Town had suffered from jet lag, going three goals up in the first half. Carlos Canha, Matt Loaring and Charlton Gauvain got the goals, with Andrew Dalhouse getting one back four minutes after the break- but it wasn’t enough for Heath and the match ended 3-1. Six hundred and twenty eight turned out to watch it.