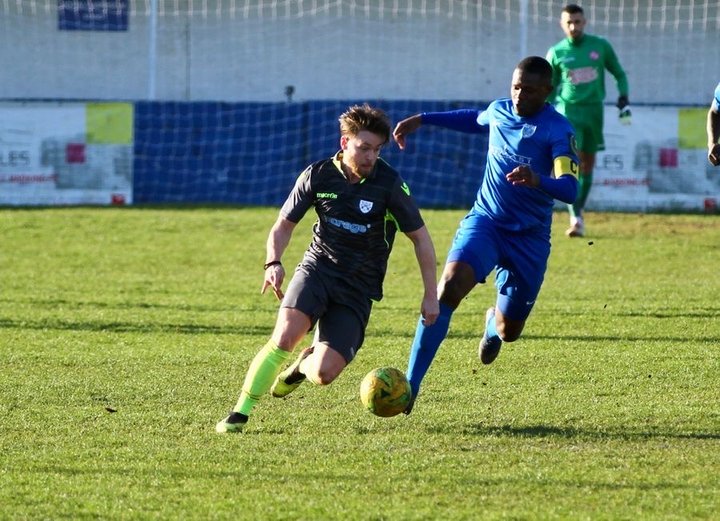 Elsa Jones, a young volunteer at Hanwell Town and member of the Middlesex FA Youth Council, introduces you to Jack- a player who won't be kept down.

At the beginning of the season I joined the Middlesex FA Youth Council. This season it is one of our aims to help promote mental health awareness and the impact mental health has on the players in our county, so I decided to speak to one of the players at Hanwell Town - the club I volunteer at- to discuss how he has remained positive throughout some tough times in his non-league career. Jack Hutchinson has suffered a number of significant setbacks, including four major injuries- two of which required surgery. He has also had to cope with the passing of his father, a man who was instrumental in his success. I’m going to introduce you to Jack, and to the trials and tribulations of his footballing life.

Jack began his career at Northwood, aged 16. He soon impressed watching professional scouts, and was picked up by Barnet just a few weeks later.

Jack remained at Barnet for the remainder of the 2011-12 season before being released. He knew he had to remain positive and not let that set him back, and he showed that positivity the following season (2012-13) by returning to Northwood and scoring eight goals in fourteen appearances, before stepping up a level to Isthmian Premier Division side Wingate and Finchley, who avoided relegation with just a game to spare. Jack was the recipient of the Young Player of the Year Award at the Maurice Rebak Stadium, and had gone a long way towards demonstrating that he had picked himself up from his Barnet disappointment. 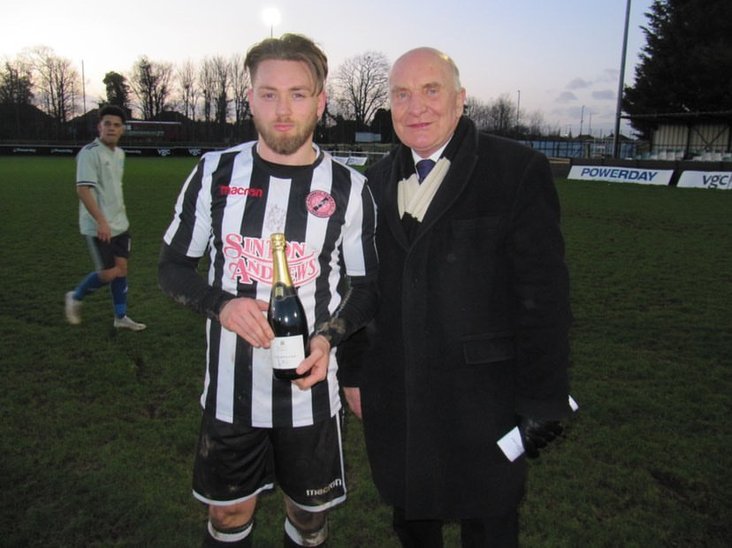 Jack with his Man of the Match Award

Aside from being signed by Barnet, another huge achievement for Jack from the 2011-12 season was his being chosen to represent Middlesex at County level as an Under 16. He played for the Under 16 side throughout the season and also became its captain; a proud moment for the family as Jack’s dad had also captained the side almost exactly thirty years previously. Jack went on to captain the Under 18 side too.

Jack began the 2013-14 season at Beaconsfield SYCOB, for whom he made twenty seven appearances. He played a vital part in their promotion push, scoring fourteen goals, before signing for Wealdstone midway through the season. At was whilst at Grosvenor Vale that he suffered the first major injury of his career, and it came at entirely the wrong time. He was a regular in the first team when damage to his shoulder left him requiring surgery; the treatment and recuperation needed meant that he would be out of action for a minimum of three months. Despite that setback he still managed to make 20 appearances for the Stones, ultimately winning the league with them and gaining promotion into the National League South where they currently playing today.

The following two seasons saw Jack turn out for six teams, North Greenford, Hanwell Town, Burnham, Chalfont St Peter, Ware and Staines Town. He scored thirty two goals during that period, an excellent record for someone who is usually in midfield, and also played for the Swans against Leyton Orient at Brisbane Road in the First Round of the FA Cup. The match against their League Two opponents didn’t end well for Town, as they went down six-one, but was an experience that none of those present will ever forget.

Jack then joined Dunstable Town for the 2016-17 season. He was a regular for the Blues, who were playing in the Southern Premier Division, but he soon had to face the biggest shock of his life- the loss of his father and mentor in November 2016. Jack’s father had been a huge figure in his career, attending all of his games along with his mum, Karen, and offering advice and guidance to his son. After the passing of his dad, Jack made the decision to move to Australia with club captain David Taylor, leaving his job, family and friends behind. A new start, and new possibilities; but disaster soon struck once more.

Jack played two games for Altona City before an awful injury. A nasty tackle left him with a torn meniscus and anterior cruciate ligament. He was still grieving from the loss of his dad, was many thousands of miles away from home, and now couldn’t play football either. He was determined to not let injury stop him from experiencing what Australia had to offer, however, so he stayed for two months while he was on the waiting list to have surgery back in the UK. Financially Jack needed to support himself, and he did so by getting a job as a carpenter, before returning home to undergo surgical reconstruction and rehabilitation. His recovery suffered a major setback when he again tore his meniscus in rehab, requiring another operation. It took him more than two years to return to the game.

At the beginning of the 2019-20 season Jack returned to Hanwell Town, and featured in all the Geordies pre-season matches. And then, further disaster. After a horrendous tackle in a match against Colliers Wood, Jack was left with a broken leg. Thankfully it was a hairline fracture, but nonetheless Jack was sidelined for 3 months. This impacted his work life too; he works as a personal trainer and was unable to work for a month- which meant he wasn’t earning, leaving him under financial pressure.

Hanwell Town have tried to support Jack as much as possible. The club has two physios, Stuart Everley and his son Scott – who graduated in the summer from the University of Portsmouth after completing four years studying sports therapy. Scott has been vital in Jack’s recovery, working with him on specific exercises to get him back up to full fitness.

Jack’s first appearance of the season came in our cup game against Harefield, and he soon became a fan favourite with an audacious strike from forty yards which flew past the keeper. Since then Jack has become a regular in the Hanwell side, starting out as a substitute but recently making the starting eleven. Against one of his former clubs, Staines Town, he finished with the man of the match award and a cracking goal to his name. In the following game against FC Romania he starred once more, a brilliant goal levelling the scores- and we went onto win the game 2-1.

As a fan, writing about Jack’s story has made me realise the impact injuries can have on the players at our level. Most players will never have to go through what he has been through and I wish him all the best at Hanwell Town and throughout the rest of his career. I hope that one day Jack can go back to Australia and finish what he aspired to do back in 2017.

Throughout Jack’s injuries he has had to remain positive, and he admits that this was tough, especially in the beginning. After his broken leg in pre-season we could see that he was cautious going into some tackles, rightly so after all he’d been through. That perhaps demonstrates the psychological effect the injuries have had on him. A key part of his positivity, he explained, was his memories of the passion his dad had for football. More than any other factor it was the example he had been set by his father which kept him pushing on through all of the setbacks, determined to achieve his goal.

Things are finally starting to look up for Jack. Everyone at Hanwell Town wishes him the best for the remainder of the season, and hope that he remains injury free and keeps those goals coming!

Are you a young and aspiring writer who would like to write about the goings-on at your Isthmian League club? Then feel free to get in touch, as we might be able to help. Email Ian Townsend.

All images from Elsa Jones.

 It’s the big one! We’ve a titanic top two clash as Worthing host Folkestone Invicta. Can the visitors cut the Mackerel Men’s lead to two points- or will Worthing be eight points clear at full time? Here’s our Premier preview.