Flashback! Swans, Cockerels and a collection of fouls… 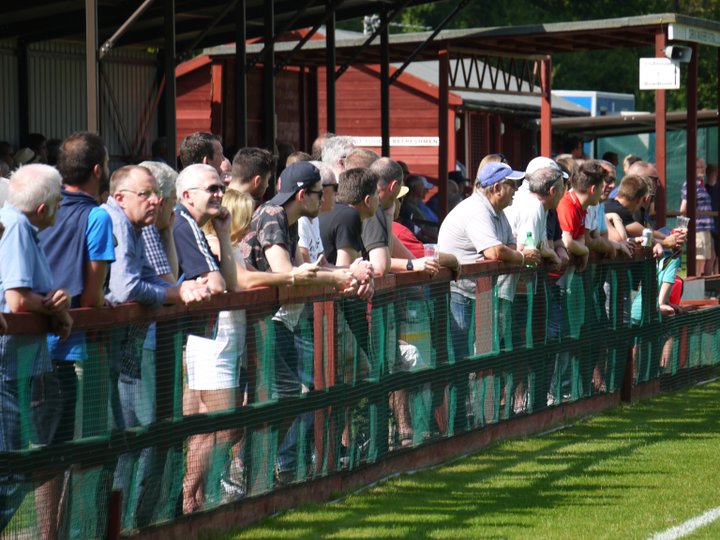 We head back to August 2017 and visit Dorking Wanderers former ground at Westhumble. They were starting their very first Step Three season, whilst opponents Staines Town were both established at that level and focused on going higher.

If you happen to be flicking through the latest edition of the Non League Club Directory- available from all good booksellers (and a few dreadful ones who do all they can to avoid paying U.K. Tax)- and reach the section on Dorking Wanderers, you might think it a little short on information. The ten year record, for example, leaves the first three years blank. The club records section is entirely devoid of information. What on earth were the authors thinking?

In truth, it would be unfair to blame Mike and Tony Williams (said authors, not as you were perhaps thinking a pair of unfunny 1970s comedians with a slobbering St Bernard). You’d perhaps be better off blaming Wanderers, because the club is, in effect, the equivalent of a footballing toddler; albeit a toddler who has already passed the Oxbridge exam, plays the violin like Yehudi Menuhin and advises Professor Stephen Hawking on algebra. Formed as recently as 1999, when they played in the now-defunct Crawley and District Football League, the club were then promoted through four divisions of the West Sussex League, Three Divisions of the then Sussex County League (now Southern Combination), and then last season- as you may have noticed- from Isthmian South at the second attempt, after qualifying for the playoffs on the first occasion. That’s almost a promotion every two years, so on that basis look out National League South 2019-20; although you might think that the next step might just be a little more difficult than the previous ones. 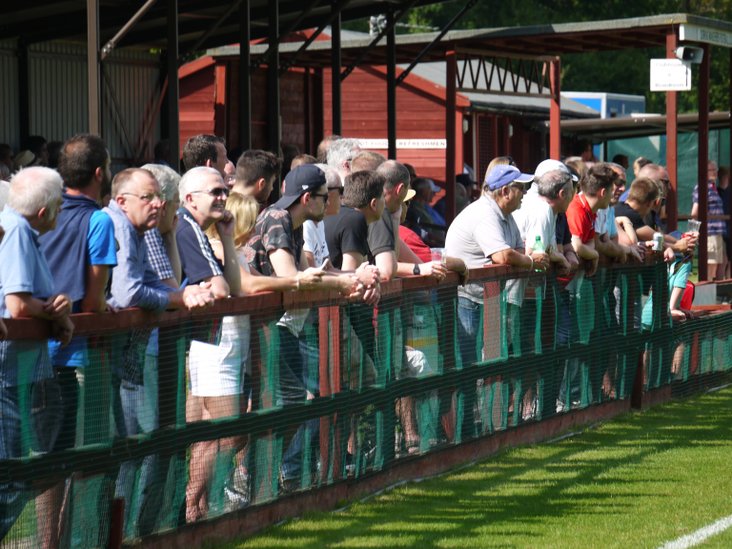 Supporters in the sunshine

Wanderers came into today having had a mixed start to their first campaign in our Premier Division, and they’ve had a little bad luck, losing keeper- and last year’s player of the season- Slavomir Huk to a hand fracture, as well as midfielder Sam Beard to a leg fracture. Two broken bones, two defeats and one victory inside the first fortnight- and speaking to Huk before the game he could be out for up to six months if the doctors at St Helier Hospital are to be believed. Mind you, he did offer to wear a lightweight cast and play at centre-half if required!

Despite the adversity, however, there is still a great deal of optimism around Westhumble, and understandably so- although that optimism will move a mile and a half at the beginning of November, when Wanderers move to their new Meadowbank Stadium near to the town centre. That move should have come at the start of the season, and had everything kept to schedule the first competitive match would have been against Metropolitan Police, but construction delays got in the way. Their first visitors after the delayed opening? Billericay Town. You’d almost think it had been engineered that way, wouldn’t you?

Speaking to a number of home supporters before and during the game demonstrated an excitement about the new stadium- coupled with an obvious reluctance to move. To understand why they don’t have the removals man on speed dial all you need to do is visit their current home, sit in the front row of the main stand, and look up. The vast green bulk of the North Downs, specifically Box Hill, rears up ahead of you. On a sunny day like today the vista is absolutely stunning and worth the admission price even without the football. And, as one supporter explained before the match, it gives you something to look at on the odd occasion when the team is awful!

Not that the team is awful too often, it seems. Speaking to Club Shop Manager Paul Manuel- and son Hugo- the on the pitch attractions of Wanderers were enough to not only first tempt him away from the professional game, but to get him hooked and then involved in the club. Paul and Hugo were season ticket holders at Crawley Town until a few years ago, and whilst still having an affection for the nearby Red Devils their allegiances are now clearly fixed to the side with the cockerel- a symbol of the town- on their chest. “I used to spend five hundred quid a year on season tickets to watch a team full of people who didn’t care. Now, whatever the match, I watch two teams that work hard for each other and hate to lose. There’s a passion at this level that the professional game has lost.” The shop sells the usual range of club souvenirs but is also a programme collectors Aladdin’s cave, with wall to wall matchday magazines from all over the UK and occasionally beyond. It also has a Crawley Town connection, as on the far wall is a photograph of late Crawley Town one-time club shop manager- and programme dealer extraordinaire- Ian Hands, a familiar face around Sussex, Surrey and further afield who passed away unexpectedly last summer. Paul counted him both as a friend and as a programme-collecting inspiration. 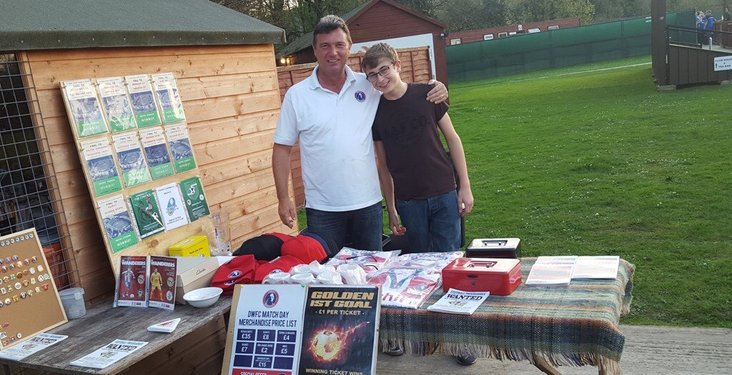 And so say all of us.

Wanderers opponents today, Staines Town, started their campaign with a score draw at Champion Hill against highly fancied Dulwich Hamlet. And then they went a little goal crazy, walloping six goals without reply past the only side to finish above Wanderers in last year’s South Division, Tooting & Mitcham United, before thrashing home five more against Kingstonian. In two seasons since relegation from National League South they’ve managed to finish only sixteenth and twelfth, however the squad for this season looks the strongest seen at Wheatsheaf Park for a number of years and manager Johnson ‘Drax’ Hippolyte has good reason to be confident although, as he freely admits, he didn’t expect things to come together quite so quickly.

Speaking before the game, Swans fans Trevor and John found the right mix of early season realism and optimism. “So far, so good,” explained Trevor. “It’s early days though,” added John. “We’ve a bigger squad than last season, more depth, and the team seem to be playing for each other.” Trevor continued. “Best thing is, there are goals across the side. Twelve goals so far and seven different goalscorers tells its own story. It wasn’t so long ago when our only goalscorer was Louie Theophanous (now at Billericay Town), and while he was good in front of goal you had no chance of ever getting him to pass the bloody ball. These lads have far more of a team ethic.”

Asked about their hopes for the season, there was a gentle disagreement. “Playoff’s,” stated John. “I’d be happy with the top ten,” exclaimed his companion. “Things can change so quickly. Injuries and suspensions can so easily turn a positive season into a disappointing one. I’d be content with seventh, eighth- although the playoff’s would obviously be nice.” 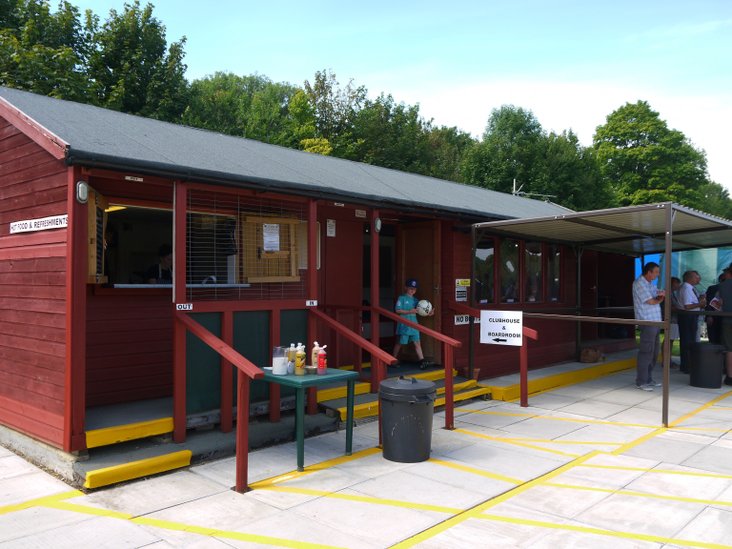 John had been an Arsenal season ticket holder from 1978 to 1996. Asked what had driven him away from the professional game, he was quite clear. “The cost. And Sky Sports.

I gave my season ticket to a friend for one year, then decided not to go back. When you have work and family responsibilities, and everything is so expensive, and then you’re trying to plan your life and games are being rescheduled for TV left, right and centre- it just became unmanageable. So I’ll stick with Non League, it’s a far better experience, good value for money and you don’t get mucked about.”

It soon became apparent that another person who wasn’t going to be mucked about was the match referee, Mr Hughes. Shortly after the match kicked off he began to produce yellow cards with a regularity that suggested he’d picked them up on a buy-one-get-one-free deal. By half time he’d waved the red one twice, too, and we found both teams playing with ten men. Both might have had reason to feel a little aggrieved.

The away team had controlled much of the play, and were deservedly a goal up, having taken the lead with a Mohammed Bettamer free kick in the fourteenth minute. Wanderers attempted to get back into the match but were not being allowed time to play, the Swans closing down quickly and focing the home side into committing fouls. Two of these fouls came from Dorking number seven Jerome Beckles, neither particularly malicious but both dealt with by the waving of a card, which left the home side with a mountain to climb. Luckily for them the referee then reduced that mountain to something the size of a small hill, removing Town’s number eight, Wadah Ahmidi, for a second yellow after he mistimed a 50/50 challenge with Dorking midfielder James McShane. 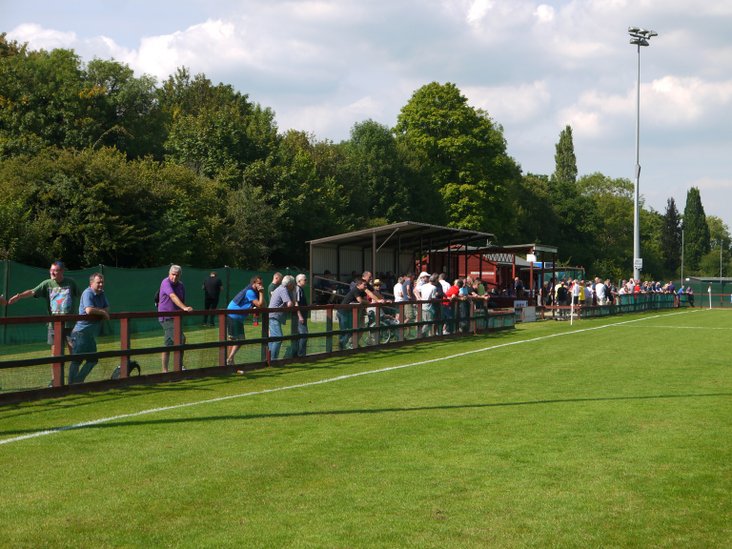 The second half was dominated by one man. It seemed we had been invited to the Matt Briggs show.

Briggs is indeed a prodigy. An aerospace engineering student who is combining playing with study- and former captain of the prestigious Wallsend Boys Club which produced the likes of Alan Shearer, Michael Carrick and Peter Beardsley- this young man has a balance and turn of pace seldom seen at this level. Last season he was linked with (deep breath) Stoke City, Crystal Palace, Portsmouth, Charlton Athletic, Ipswich Town and Huddersfield Town, and the biggest surprise is perhaps that he continues to put his studies first- but then again, perhaps that’s just a demonstration of quite how level headed he is. The home supporters sung his praises, not only because of his obvious talent but because “he’s a genuinely lovely bloke.” One person at Westhumble who perhaps wouldn’t have given such a positive review would have been Staines full back Josh Webb, as he was forced to pull, trip and foul on a number of occasions as Briggs ran the away side ragged during the second period. On 54 minutes a superb run down the right almost led to the equaliser, but substitute Dan Pearse just couldn’t manage to get over the ball. Eight minutes later the full back and centre back were again left for dead as another cross led to a corner. Webb was then booked for stopping the forward the only way he could, with a cynical tackle, before another weaving run ended up with two more defenders beaten and a short being deflected over the bar. Another foul on Briggs, another yellow card, and then the moment which deservedly brought Wanderers level. Briggs was fouled yet again, the free kick was launched towards the near post, and Dean Hamlin left his marker for dead to crash a header home.

As we headed towards the exit it was clear that the home supporters were the happier of the two. The home manager was also the happier of the two; the air echoed with the sound of Drax berating his team for their lack of concentration. Listening to the chatter of the Wanderers fans as they crossed the car park there was one main theme; the season would be difficult but their side had enough about it for them to “be ok.” They were right; although Staines had closed them down in the first half the second had been rather different, and they’d passed, passed and passed some more- there was no abandonment of footballing principles as they chased the game.

One other thing was clear, too. The longer they manage to hold on to Briggs, the higher their final position is likely to be. 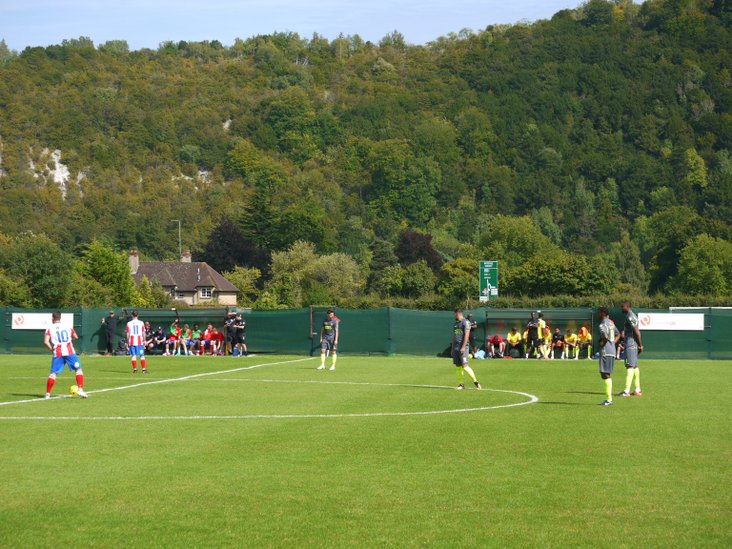 Kick off in the shadow of Box Hill 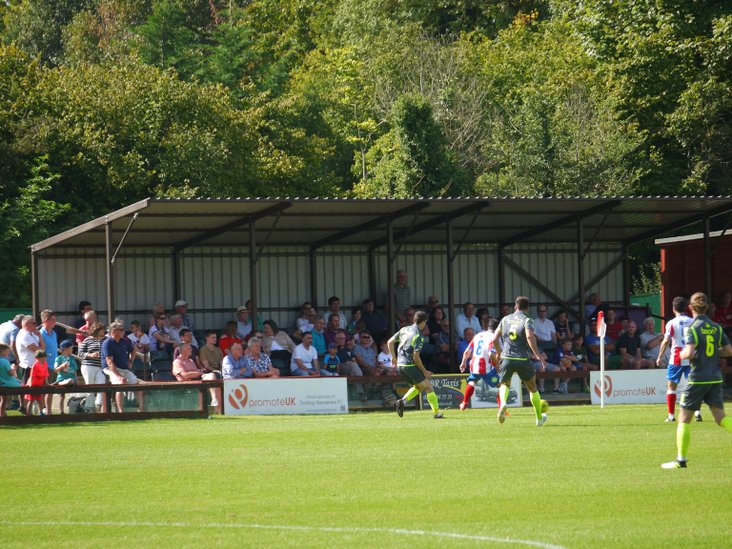 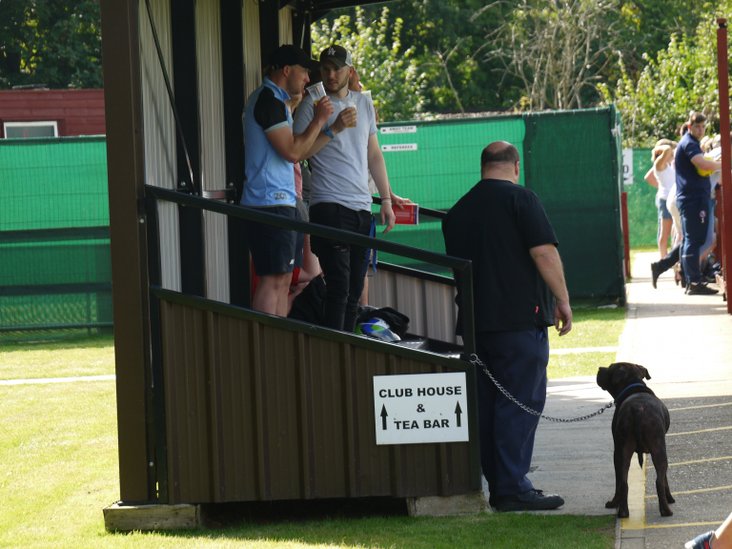 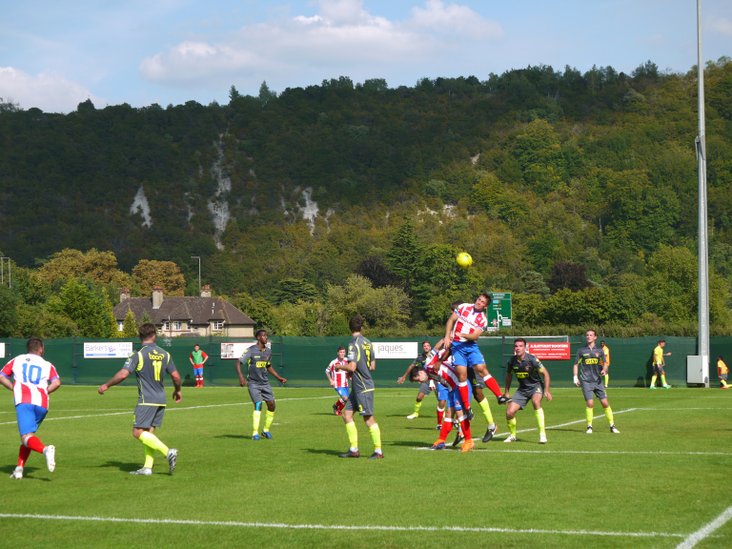 A corner- towards Box Hill 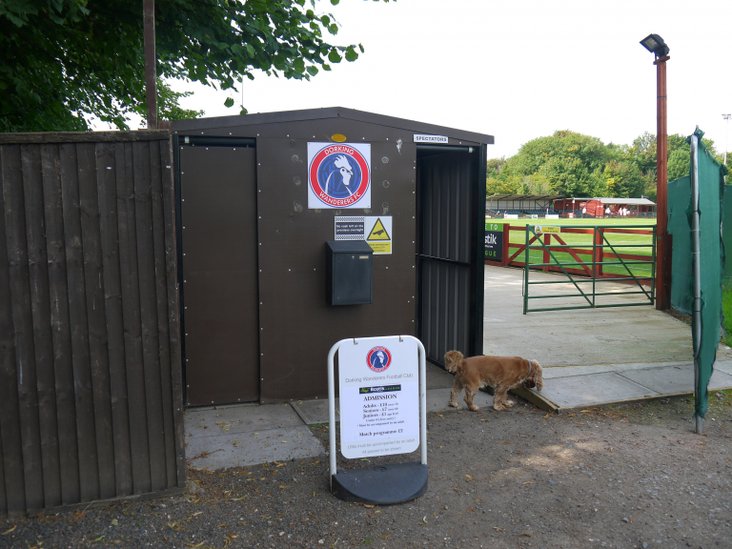  Football and Me: The Ogo Obi Story Manchester United, Watford, Cardiff City, and Hanwell Town. Elsa Jones tells the story of a player who is focused on hitting the heights once more.