Football and Me: The Ogo Obi Story 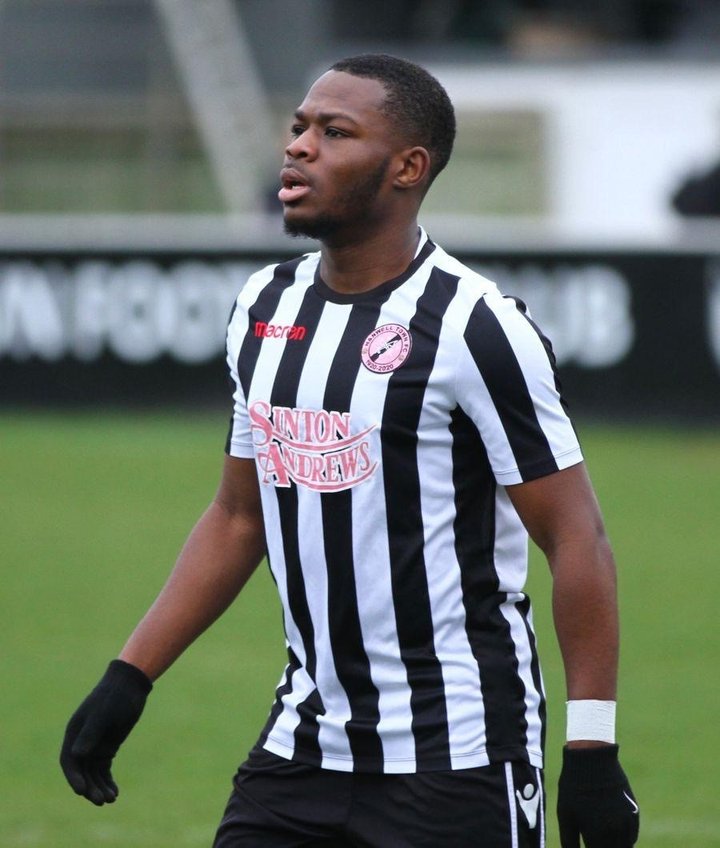 Manchester United, Watford, Cardiff City, and Hanwell Town. Elsa Jones tells the story of a player who is focused on hitting the heights once more.

After writing about Jack Hutchinson and how he remained positive through struggles in his career, I decided that I should next write about Ogo Obi, a player who recently joined Hanwell and up until a couple of years ago was close to Premier League football. I spoke to Ogo about what happened, the turning points in his career and how he is going to get back up the footballing pyramid.

Aged ten, Ogo Obi turned out for his small local Sunday side Pinnacle FC. Little did he know the next ninety minutes would change his life. After a stand out performance topped off by two goals, a watching scout approached Ogo offering him a place at Watford. This was just the beginning of a long journey as a Hornet; he stayed with Watford for another 5 years before then signing a scholar’s contract, which kept him with the club for another year. Throughout that period he continued to shine, scoring a number of goals to help Watford win the Premier League Development League Division 2; a great achievement for Ogo and his team mates. A wonderful season was topped off by a similarly successful Milk Cup - a youth competition in Northern Ireland for Premier League teams- where he went onto win the golden boot after scoring ten goals in five games, including a hat trick against Liverpool! Ogo featured at the Milk Cup again the following season, this time with Manchester United after they took an interest in him. He was offered a trial with them, and won the cup, but decided to return to Watford where he was later rewarded with a 1 year scholarship and 2 year professional contract, the seventeen year old sticking with the Hornets despite interest from other sides such as Tottenham Hotspur, feeling that their youth system at the time was much better than the other offers he had. He began his professional contract and immediately made a name for himself; Ogo was soon labelled by the press as the ‘Nigerian Messi’ and the ‘Watford Wonder Kid.’

His time at Vicarage Road came to an end in the summer of 2017, as he was released by the club following their promotion to the Premier League. He was devastated but wasn’t going to give up, and travelled north to trial with Bolton Wanderers. A few months of hard work later, his perseverance paid off, in January 2018 he joined Cardiff City- another side recently been promoted into the Premier League- after a successful trial game against his old side Watford. Despite starting on the bench in the match, he came on to score the equaliser only minutes later, making an instant impact against his former club He was almost immediately offered a short term contract which kept him at the Bluebirds for 6 months. A huge boost of confidence for the 19 year old, he was back where he wanted to be! 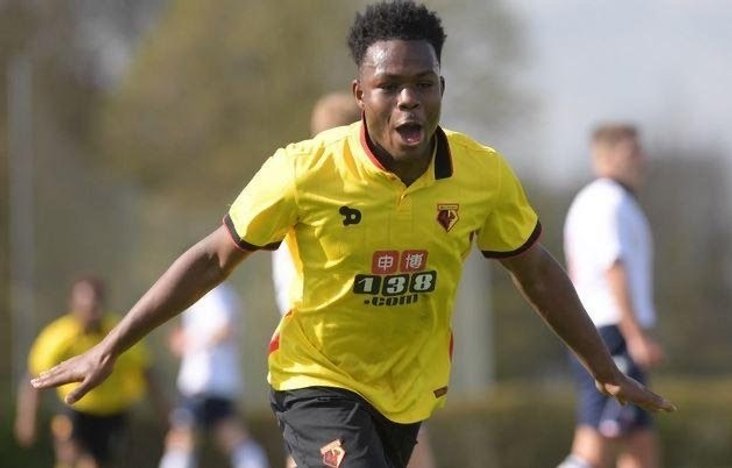 Ogo as a young Hornet

But the move meant a huge change for Ogo, Now living over two hundred miles away from home, he had step up not only on the pitch but off it too. He quickly moved into a luxury apartment provided by the club and was living on his own for the first time, a tough thing to do for someone still so young. He found it difficult to be so far away from his family and friends, but his teammates and the staff at Cardiff made it easier for him to adjust by giving him constant support. During his short time at Cardiff Ogo featured in all of the Under 23 games and found the target regularly, but then came a discussion with Neil Warnock which was to change his career yet again. Warnock was characteristically blunt, explaining, “if you want to waste your time playing reserve football then stay, if you want to progress, leave and get into men’s football. “

That advice must understandably have been hard to hear, but Ogo knew he wasn’t quite ready for Premier League action just yet. As Warnock suggested, he left Cardiff, moving back down to London. He was determined to throw himself back into football so rejoined Hampton & Richmond Borough in September 2018; he’d previously been on loan at the Beveree during his time at Watford. But things weren’t going to be easy for him; he now had to fend for himself, and there were marked differences between life in the Premier League and life in the National League. He found it difficult to adjust. As he explained; “when a player is at a pro club they are looked after, all of their kit is washed and set out for each training session, their boots are cleaned for them. No non-league club would wash your training kit/boots for you, you’d be lucky if your bib had been washed!”

Ogo had to wait for over a month and a half for his international clearance to come through before he was finally able to play for the Beavers, but even then, he had no luck. An injury to his hamstring left him sidelined for the next two months and out of the first team picture. He decided to join Wealdstone where he stayed for a month before finishing the season off at Hendon. Ogo describes this as his toughest season in football; his release from Cardiff and then an injury made it hard for him to settle into a team, due to that he struggled with his fitness too. Once the season was over he plunged himself into fitness and conditioning training so he was prepared for this season.

Ogo began the season at Hayes and Yeading United, where he played the full 90 minutes in that huge FA Cup game against Oxford City which was watched by millions on BT Sport. He featured in all of Hayes’ matches and is still currently their top scorer with 13 goals. In January, however, Ogo made the decision to join Hanwell Town, who at the time were sitting top of the league. In his first game for the Geordies, he showed confidence and stepped up to take a penalty, thumping it into the back of the net to level it up. In total Ogo has played only seven games for Hanwell, but he has made a huge impact by scoring eight goals- including a hat trick against promotion rivals Waltham Abbey. The club was delighted to offer him a contract but unfortunately for both the club and Ogo the season was cut short. 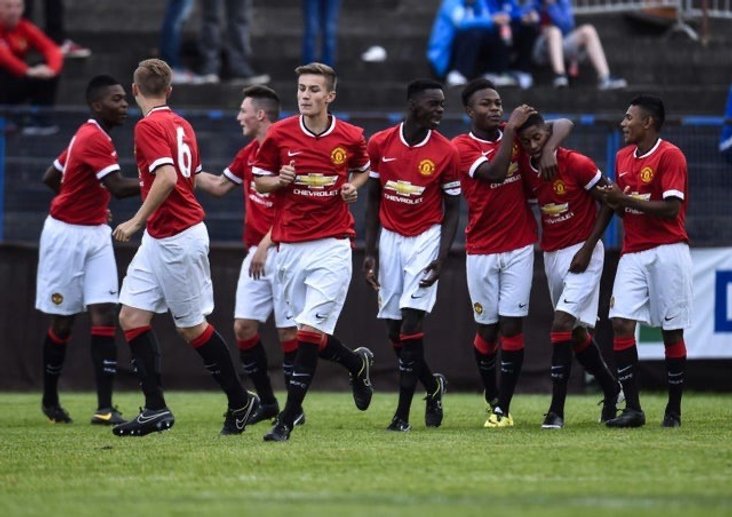 Ogo and a collection of Red Devils

I asked Ogo about the difference between a professional club and a non league club and how he adjusted. He explained:

“It was really tough at first. You go from having everything done for you to the complete opposite of having to do everything yourself. It was hard to adjust to having training at night, and not getting home until 11pm after training, whereas with a professional club you are training during the day. I had to go and get a job as I was no longer going to be training/playing every day, and I now work as a PE Teacher, which I love. Non-league is a lot more challenging, physically and psychologically; points matter, as non league players have families who they are trying to provide for and it’s a lot more serious if they don’t get a win bonus or a clean sheet bonus.”

Having just celebrated his 22nd birthday what are his plans now? Well, Ogo is determined to get back to the top; his ambition is to play in the Premier League, but who’s isn’t? One advantage Ogo has is that he has been there, and he knows what it takes.

It seems clear that Ogo has the ability, talent, determination and most importantly mindset to get back to where he wants to be. Will he be gracing the Premier League in the near future? If talent and determination prove to be the keys to success, then you wouldn’t want to bet against it. 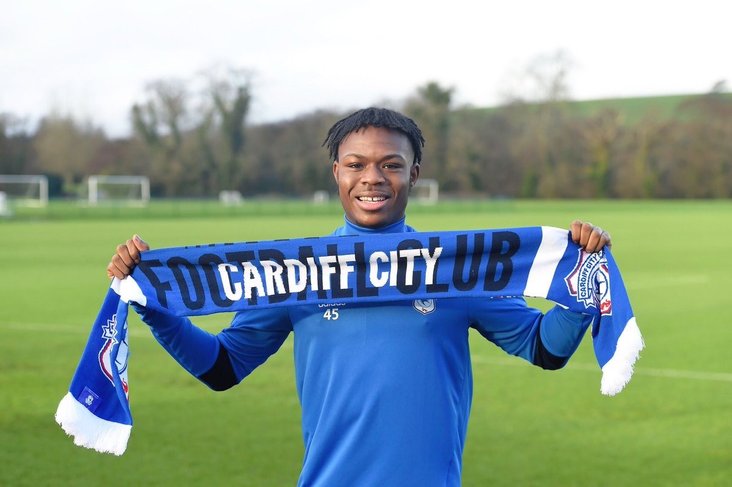 “Rest in peace Bill, I hope you are looking down on us now and you enjoy this piece, thank you for the memories.”

Flashback! Swans, Cockerels and a collection of fouls…  We head back to August 2017 and visit Dorking Wanderers former ground at Westhumble. They were starting their very first Step Three season, whilst opponents Staines Town were both established at that level and focused on going higher.